News > Covid Tracer update drops, but is there an ulterior motive?

Covid Tracer update drops, but is there an ulterior motive? 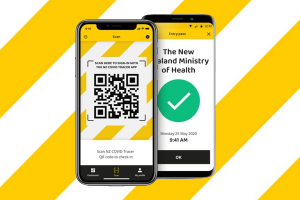 NZBN, e-invoicing and the question of mandatory QR codes…

It’s been called simplistic but, as New Zealand’s Covid Tracer app finally receives a functionality upgrade, some are questioning whether the infrastructure behind the app might be about more than just Covid itself.

The app, launched three weeks ago, received an upgrade this week, enabling proactive notification of users who have been at the same venue as someone who develops Covid-19.

The upgrade, which ironically comes after New Zealand moves to Level 1 with physical distancing lifted and companies no longer required to keep a register of visitors, also enables users to send their digital diary to contact tracers, if required. A vibrate mode when scanning QR codes is also included to assist the visually impaired.

“This structure being built out behind the scenes with Covid is a real catalyst to drive structured identification in a standardised way.”

It’s a big step up for NZ Covid Tracer, which has garnered 546,000 registrations – around 10 percent of the Kiwi population. On launch it simply enabled users to update their contact details and keep a ‘digital diary’ of places they’d been via scanning NZBN-based QR codes at any premises that had them on display.

Ultimately the app is expected to integrate with third party contact tracing apps, potentially enabling matches across platforms to be located, and users of other apps to be notified if they have potentially been exposed. Businesses which have had someone Covid-positive on their premises are also expected to receive notifications.

The app has been both slammed and applauded. Those in favour like its simplicity and focus on privacy. That early simplicity, however, is a key peeve for many who have questioned the value of such a basic offering, while the process for businesses to create their modified QR code – which traps structured data about the company and its location inside the code – has been criticised as too complex. The process has since been simplified, with the MoH saying 45,100 posters have now been created. MBIE was contacting around 800,000 businesses about the codes.

While keeping manual sign-in records of visitors to premises is no longer a requirement for New Zealand businesses under Level 1, the government is urging businesses to continue to display the QR code posters – and it hasn’t ruled out making the codes mandatory, something it has alluded to several times.

Prime Minister Jacinda Ardern admits there have been discussions around making it mandatory for businesses to display the government QR codes.

“We have discussed this very point and we have talked to the retail sector, hospitality and restaurant sector, and at the moment what we’ve opted for is to continue to work with them to make it easier for their members to access the QR code,” she said on Monday.

“At the moment, accessing the QR code does require you to have your business number and RealMe. We are trying to work on ways where we are dispatching out to businesses their QR code to make it easier.

“While we are still doing that, we have kept it at voluntary, we will keep working with the sector and we are keeping open the option of mandating that in the future.

“At the moment we are working together, and I do think we can improve people’s access to it.”

New Zealand’s very different tack to contact tracing apps has also raised eyebrows – and it’s that different tack which may signal greater plans at play, with one source saying while the app itself might be simplistic the infrastructure behind it is ‘really powerful and sophisticated, not necessarily in the immediate with Covid, but beyond this’. What that source is referring to, is the potential for the network to become the foundation for e-invoicing and electronic advanced shipping notifications or dispatch documents.

While there are many different contact tracing apps globally, most, including those in South Korea, India, Iceland and some US states, revolve around using GPS data from the phones – something that has prompted privacy concerns about widespread, automated GPS tracking – or Bluetooth signals, a’la Singapore’s TraceTogether and Australia’s CovidSafe, which handshake with other app users nearby and store the proximity and duration data – but not location – on the users phone. The Bluetooth option, while raising less privacy concerns, has raised concerns over the inaccuracy, and well as the potential for false alarms, given the variability of signal strength and its ability to pass through walls.

NZ Covid Tracer however, is based around New Zealand Business Numbers and as such uses global location numbers (GLNs), rather than standard NZ Post addressing. GLN’s are used to identify legal entities down to a front door – or farm gate. Every Kiwi business is identified with an NZBN which is a GLN – chosen as a unique identifier by the Government as it’s an ISO standard and part of a ‘credible international system used in international trade, supply chain logistics and e-commerce’.

That matters because successive governments have been trying to deliver an electronic infrastructure that would enable reliable transactions to happen electronically.

To do that, you need to digitally identify the person you’re trading with and their legal entity.

While Covid Tracer is being used by citizen’s arriving at a business premise and scanning themselves in, that premise is also a place where physical goods are likely to be delivered, and where transactions ­– that could, potentially, be digital – happen.

“So this structure being built out behind the scenes with Covid is a real catalyst to drive structured identification in a standardised way for New Zealand businesses and the private sector.”

Both Ardern and Australian PM Scott Morrison have been pushing e-invoicing as part of the Single Economic Market agenda, which aims to create a seamless trans-Tasman business environment.

E-invoicing uses the NZBN for party identification, but the next step beyond invoicing is knowing exactly where goods are delivered to, with identification for physical locations.

“The government is trying to standardise the mass of different approaches that have been used previously for physical location identifications. There are lots of different numbers often built on proprietary approaches, so doing things like traceability and supply chain across the board are quite challenging.

“The Ministry of Health had a problem with Covid and could have done a point solution, but instead they’re trying to join this together in a standardised way to build an infrastructure which will be a much bigger story going forward, even if it causes a bit of short term pain with businesses having to learn and register for something.”

Neither MBIE or the MoH would be drawn on future uses for the network. Both refused to answer direct questions on whether the NZBN network behind Covid Tracer could become part of a wider e-invoicing and electronic supply chain monitoring move – notably, they also didn’t deny the suggestion.

Jon Herries, Ministry of Health group manager of emerging health technology and innovation, would say only that the Ministry identified that accurate location information was critical to effective contact tracing as it helps reliably identify potential clusters and other sources of transmission.

“We also took note of how QR codes were being used in other countries, such as South Korea and Singapore.”

He noted that notifications were a key part of the plan, and without a GLN that would be ‘much more difficult and could lead to sending notifications to the wrong person about the wrong location’.