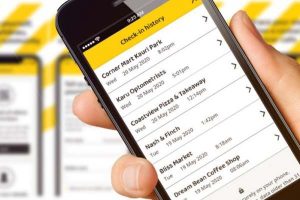 NZ contact tracing is under a blowtorch. What you can do to help…

Despite the screeds of analysis and commentary on the use and effectiveness of personal contact tracing technologies, the official conclusion, at least in this part of the world, seems to be that they have contributed almost nothing to health authorities’ response to the pandemic.

While New Zealand’s unique CovidCard concept undergoes trials (more on that below), and with Australia’s underwhelming experience with the Bluetooth-enabled CovidSafe, the effectiveness of tracing remains down to the memory and record-keeping of the individual.

As New Zealand’s Ministry of Health scrambles resources to identify and isolate contacts of the Covid-19 cases confirmed this week – after more than 100 days without community cases in New Zealand – contact tracing is again to the fore.

After a period of complacency and relaxing of attitudes toward guarding against Covid, this week’s reappearance in the wider community is prompting heightened interest in the role that Government’s NZ Covid Tracer app, released in late May, will have this time around.

In the midst of lockdowns, willingness for contact tracing is likely to be much higher – for now at least.

A new Covid-19 Public Health Response Order came into effect yesterday, and includes a new requirement for all New Zealand businesses or services to display a QR code for the app prominently at all entry points. Businesses have one week to comply, with no word yet on penalties for non-compliance.

That ruling has not been accompanied with any compulsion for individuals to trace themselves. Use of the app remains entirely voluntary and despite the passing of months, there remains no clarity on the obligation for businesses to maintain their own registers, as was previously a requirement and a situation that undermined the value of the app.

The move to make QR code displaying mandatory is the latest effort to encourage New Zealanders to adopt the Covid Tracer app, usage of which has been languishing, with just one in six of those able to download and register the app having done so by July.

On Tuesday – just hours before the new cases and resulting lockdowns came to light – Covid Tracer had 648,000 registered users and 87,591 posters had been created. There had been 2,126,059 poster scans and some 152,216 manual entries into the app.

But the reappearance of Covid in our midst has changed all of that: More than 100,000 more downloads occurred on Tuesday night (a figure boosted to 338,000 in the 48 hours after the announcement of the new cases, with 51,000 new posters created in the same period).

Still, three months after it was released – and nearly five months after New Zealand entered lockdown for the first time – Covid Tracer remains without Bluetooth abilities. It remains little more than the digital diary it was launched as, with manual entries the only user feature added since (contact alerts being the other important feature released).

In late July the Ministry of Health said it was ‘still looking into’ how Bluetooth tracing technology, such as the Apple/Google exposure notification framework can be incorporated within the app.

“While Bluetooth wasn’t developed for the purpose of proximity detection and the experience from other countries has highlighted a number of technical challenges, it has the potential to help detect and notify people who may have been in contact with Covid-19,” Ministry of Health deputy director general data and digital Shayne Hunter said in July.

But while the Covid Tracer app might not be tapping our phone’s geographic location data, our phones are still recording that data.

Reportedly, the data collected by your phone is among the information the Ministry of Health’s contact tracing centre uses, but despite the value of that automated digital diary in augmenting other sources, turning it on has not been part of any official advice to citizens.

The reappearance of community transmission highlights the need for everyone to play their part and use all the tools at our disposal. So what can you be doing to ensure you are prepared when that dreaded phone call comes?

The advice is twofold:

For Apple devices go to Settings>Privacy>Location Services ‘ON’ (and if you’d like to see how much of a trail you’re leaving, continue on to System Services>Significant Locations)

On Android devices you’ll find it under Settings > Security and Privacy > Location Services > Google Location History > Manage Activity. Go into the date, places, cities or world to see where you have been.

Importantly, particularly in more remote areas, GPS is not 100 percent accurate. The information is simply a guide to jog your memory and to augment the multiple other sources, such as Covid Tracer, texts, bank records and your diary.

CovidCard to the rescue?

New Zealand’s resurgence has spurred renewed vigour from those behind the proposed CovidCard – a Bluetooth card worn on a lanyard or clipped to your shirt, which records, on the card itself, who users have come in contact with.

When someone tests positive, data on the card can be downloaded showing any other cards it has been proximate to.

Sam Morgan, who is one of those behind the card, says the card itself does very little. It’s reliant on the central government database that holds people’s names, phone numbers and the card number. The data about contact is stored, encrypted, only on the card and not accessed unless the card holder tests positive.

The trial is the second for the technology. A government funded trial run by the University of Otago in conjunction with Nelson Marlborough DHB during lockdown found the card works under controlled conditions. The Rotorua trial will ‘allow us to understand’ how the card works in a real-world scenario, whether they are compatible with existing contact tracing systems and whether they’re likely to win public acceptance if rolled out.

But in announcing the trial, Faafoi also perhaps unwittingly highlighted a key issue New Zealand is facing, noting that any decision on whether to deploy the CovidCard will be made ‘later’ this year – and ‘at this stage it’s not anticipated’ the card would be mandatory.

Speed is not, it appears, of the essence, and the government is treading warily around any suggestions of mandatory use of any technology to aid tracing.

Morgan himself has noted that the card will only work with strong uptake. If only 20 percent of the population used the card, it would equate to around four percent of contacts traced. Take that up to 70 percent and 49 percent of contacts could be traced. At 90 percent usage the number hits around 81 percent.

Dave Heatley, principal advisor for the Productivity Commission, has his doubts about whether the CovidCard – with a $100 million price tag and a 12 month battery expiry date – would be any better than NZ Covid Tracer, which he agrees ‘has been a flop’.

“There is a significant chance that CovidCard could flop just as spectacularly,” he said in a recent blog.

“They share some characteristics: Both are ‘skunkworks’ projects, developed out of the public eye, and reflect deep (and untested) assumptions about what the public will, and will not, accept. And both appear to embody a ‘New Zealand should go it alone’ attitude that, in the midst of a global pandemic, may be unhelpful.”

While Heatley’s comments ring true, that was two weeks ago. Even three days ago, Kiwis were likely reluctant to consider more contact tracing. Now, in the midst of lockdowns, willingness to wear a CovidCard is likely to be much higher – for now at least.

Striking fast, rather than dawdling as they did with Covid Tracer, could lead to the required uptake.