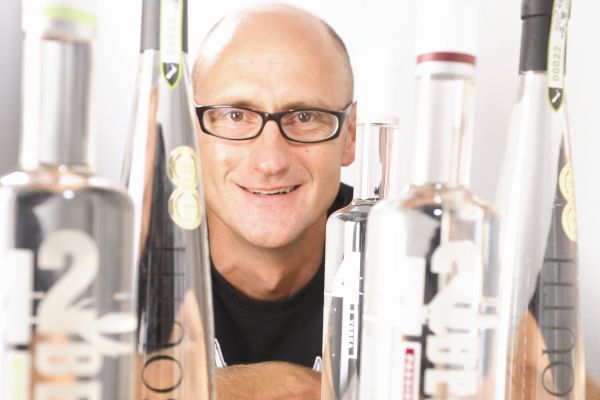 Four years ago 42 Below vodka was still being distilled in a garage. Now the spirits firm is New Zealand’s fastest growing listed company. Michael Foreman persuaded founder and CEO Geoff Ross to reveal some of the behind-the-scenes technology which is helping to manage this success…

Our recipe is so secret that we have to KILL all of our staff every six weeks!” So reads the giant banner, in mock-Soviet propaganda style, which greets visitors to the head office of 42 Below.

The banner reflects the maverick, tongue-in-cheek image that founder and CEO, Geoff Ross, has cultivated as he’s watched the company’s sales climb from a hundred cases a month to a projected 90,000 plus cases this year.

Just as impressive as the growth in revenue, which increased by 2,116% over the last two years, is where 42 Below vodka is being sold. The company’s markets are the US, the UK, Australia, and New Zealand – in that order.

The big idea
Ross says he first got the idea for 42 Below while he was head of client service at Saatchi & Saatchi in Wellington.

“I was in the States attending a conference when I saw an ad for an American vodka and I thought that was really bizarre. You don’t associate America with vodka. The imagery of the States suits whiskey or bourbon but vodka needs to come from somewhere remote, a pristine, cold, and natural environment, like the Nordic countries.”

This started Ross thinking that if the Americans could get away with producing a vodka, maybe a kiwi company could too.

“The final piece was when I heard someone from the US describe New Zealand as the Sweden of the South Pacific. So I thought perceptually at least we have the credibility to create our own vodka. That was in 1996.” Ross began distilling vodka in his garage, with a still that was a present from his wife, as he sought to perfect the art of making vodka.

“Three years later I had made a vodka that my friends seemed to prefer to the ones they could buy. The first ones I made weren’t particularly sharp but I got better at it. Then I started selling.”

In business
When 42 Below was still a garage industry Ross says the financial system, as far as one existed, was similarly basic.

“I was selling a hundred cases a month to a small number of customers and I was just running a simple little journal. What it did highlight for me – and I probably discovered this the wrong way – was the importance of things like cash flow. I was running pretty basic systems and you didn’t get an appreciation of the working capital you needed. I’d get to the end of the month and I’d sold more than I did last month – fantastic – but I didn’t quite realise the implications on cash flow of that. The more I’d sell the more money I’d need. I struggled with that for a while.”

Then in 2002 Ross linked up with the investors who helped to take the company into a bigger league. “We all put some capital in, got serious, and we turned it in to a commercial business.”

Ross says the investors, including Grant Baker and Shane McKillen, founders of the electricity retailer Empower, helped him to set up a financial system using MYOB.

“The guys I’d joined with were particularly strong on this because they had just built a large business very quickly – Empower went from nothing to [being worth] $55 million in 55 months. They knew how to cope with a fast growing company and how to bill large amounts of people efficiently.”

Ross says a lot of small businesses stumble because they create systems and structures for a small business and they fail to expand them when the business grows. It’s a mistake 42 Below is determined not to make.

“We knew if that if we got things like reporting and accountability really nailed and we had a really tight back office, then as we grew we weren’t going to have so many headaches. Although we come across as an informal, casual, sometimes irreverent culture, behind all of that is a really, really strong set of systems and procedures – forecasting, business models – we have a spreadsheet for every area, every market.”

The big leap
The company began to grow quickly soon after the investors came on board but Ross says the “big leap” came in 2003, when 42 Below listed on the New Zealand Stock Exchange and raised $15 million of capital. “We started investing in people and our markets and supporting our products that’s been a significant step up,” he says.

The money raised from the listing has also bankrolled 42 Below’s ambitious growth strategy. The company has yet to turn in a profit, but as its revenue is heading skywards its overheads as a proportion of that revenue are declining fast.

The company has also simplified its operations, by getting its distributors to assume some of the overheads in return for a reduced wholesale price. At the same time 42 Below has managed to maintain its margin through efficiencies gained from outsourcing its manufacturing to a New Zealand-based bulk distiller and bottling plant.

“We used to do it ourselves but as we’ve grown we’ve outsourced it to a far bigger plant than we had. But it’s made to our recipe and our specifications and we taste test every batch. They do a bloody good job.”

Ross says this has left the company with a stronger marketing focus. “I don’t want to come to work worrying why a conveyor belt has come off its tracks or why a forklift driver hasn’t turned up for work. I am more comfortable thinking about how we can own the streets of New York.” While the US is 42 Below’s biggest market by volume, Ross admits the company is still a little fish there, and it is concentrating its efforts on four cities; New York, Miami, Los Angeles and Las Vegas.

“We’d be happy if we were a major player in those four cities alone. The US is such a huge market – California alone is the fifth largest economy in the world.”

Ross says breaking into the American market was quite difficult, not least because of the federal approvals required and the vagaries of the US liquor licensing laws. The company now sends its US shipments into a bonded warehouse, leaving the importer to pay the excise tax as it is uplifted. “In New Zealand it’s a bit different. We sell to a customer with tax and then we pay the excise to Customs. It’s a huge cheque every month. If you miss it by one minute then you lose your licence, so you don’t want to miss those payments.”

Core Systems
All 42 Below’s Customs payments, along with the rest of its day to day transactions are now managed by a SAP Business One ERP system, which went live on 1 April last year, replacing MYOB. 42 Below was also the first user in New Zealand of SAP’s iLytix XL Reporter business intelligence tool.

This enables Business One users to export data directly to Microsoft Excel spreadsheets without having to reformat each report. It also allows them to create and modify reports, schedule them for automatic delivery, and create ‘what if ’ scenarios using point-and-click and drag-and-drop features. According to 42 Below’s finance department the SAP Business One system, which was implemented by SAP partner Realtech and runs in a Microsoft SQL Server environment, has been operating well since it went live. No major systems enhancements are planned, but the company is considering further system integration with its main supplier, the bottling plant.

Ross says he has led a fairly sheltered life when it comes to technology, but he makes good use of XL Reporter.

“I know how powerful and useful technology is, but I’ve been fortunate enough to have other smart technology people around me who can utilise it for us. I get online reports during the month on each market, directly from the distributors. You can drill right down to your customers so we can see how London is buying vodka and how that compares with two months ago or ten months ago. They are quite detailed and so we take the top line of that and we put it on paper for our monthly board meetings.”

Ross says he is “still very much hands-on” with the company’s advertising and marketing, and technology has a part to play here too.

The company has a virtual disk drive system, known internally as the ‘V-drive’, which is hosted on its own servers running under the Windows 2003 Server operating system. “We are always sending incredibly large image and movie files around – advertising artwork, commercials and footage from events, and we keep these on the V-drive which we can access from anywhere in the world. I might be dealing with a magazine say in London and I’ll send them a low resolution version of an image. They’ll agree it, we’ll then download the hi-res version to the V-drive and give them a password so they can access it. We use that all the time.”

For connectivity, 42 Below uses Xtra as its main internet service provider and it has a group business account with Vodafone for mobile communications. The company is investigating VoIP technology but has no immediate plans for a rollout.

Personal kit
Ross, who lives in Herne Bay with his wife and two children (both boys aged 6 and 3), uses technology quite extensively at home.

He has just installed a PC in the kitchen mainly for the children, and he owns a Toshiba laptop which he uses “all the time”, especially during his frequent trips overseas.

So far, Ross hasn’t been lucky with his mobile phones. “I had a Motorola RAZR up until last month but then it just stopped, so I had to go back to my old Nokia. I did have an iMate with email on it, but I dropped it in Melbourne by mistake.”

Ross says he hasn’t replaced the email option on his mobile because it was too distracting.

“I’d be giving my children breakfast in the morning, the phone would beep and I’d think, I’ve got an email – I’d better check it. I think I’d like to keep email and phone separate but that said, I’ll probably buy a BlackBerry in a few months.”

“The secret ingredient is probably what’s not in it. What gives vodka heat is some of these chemicals like methanol and butanol. When you bring a shot of some vodkas to your mouth you get an unpleasant sensation on your nose – that’s methanol. Butanol gives you a rough heat at the back of your throat and it’s associated with some of the Russian vodkas. We distill our vodka four times and we flood it with spring water before distilling it for the final time, and we find that is a way of removing any of those impurities. The rule of thumb with vodka is that the more pure it is the more smooth it is.”

The future
Ross says the next step for 42 Below is to follow up the success of its vodka and gin brands with the launch of a white rum. The rum will be distilled in Fiji, partly because of the abundant sources of sugar cane and partly for “Pacific Island credibility.”

Beyond that, Ross hopes to keep on winning “that award” [country’s fastest growing company] for the next ten years.

“It’s going to be harder to do that as time goes on because the baseline is just going to get bigger and bigger,” he says.