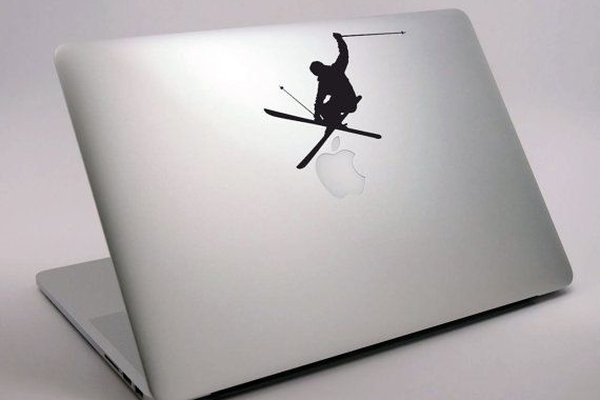 Saj Arachchillage, Senior Client Strategist at Jade Software, uses the analogy of a ski jump when he talks about the move to cloud and embracing enterprise DevOps.

It’s a simple model used by the business technology company to explain the benefits companies can reap from cloud and DevOps, and the journey to modernisation.

“It’s developing that trust and safety culture within the business to test and learn.”

Many customers start in the upper right of a quadrangle, constrained by expensive, legacy enterprise systems, facing high cost of running and high cost of change – two factors Jade says are critical KPIs for the move to cloud and enterprise DevOps. 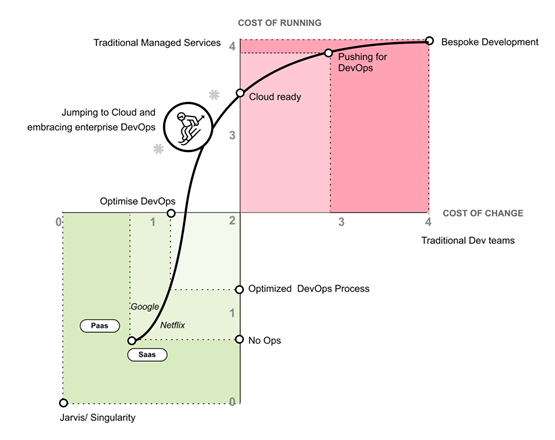 “If you think about any IT project, the two key things are the cost of running, or how much it costs to keep the lights on, and the cost of change – if you want to make changes to the system such as adding new features, what does that cost look like,” Arachchillage says.

Companies start out pushing for DevOps and getting themselves to a cloud ready state – that’s the gentle slope onto the jump. They’re still in the upper right, but already starting to reap some returns in the form of reduced cost of running and change. But the real benefits come as they accelerate down the slope into the bottom left with its optimised DevOps processes, or, the ultimate end point, NoOps.

That’s a world akin to Jarvis, the fictional AI butler from Iron Man.

“Singularity or the zero point is where Iron Man just talks to Jarvis and says can you build me this and he goes and builds it for you, NoOpps is as close as you can get these days” Arachchillage says.

Needless to say, the bottom left quadrangle is the zone of the elite companies, such as Google and Netflix, at least for now.

But it’s a zone Jade is keen to see more local companies enter and one increasing numbers of Kiwi and Australian companies are angling for.

“A lot of people forget that companies like Amazon (the e-commerce arm) actually had a monolithic retail system and they had to break that down into a microservices architecture as part of their move to DevOps,” says Justin Mercer, Jade Australia general manager. “So even the poster child we look to now started in that back right sector, so it is definitely an obtainable journey for any organisation out there.”

That’s good news as companies everywhere seek to compete with cloud natives, redesigning their organisations to deliver change and innovation with the agility of cloud-native disruptors.

“If you think about those two ends of the spectrum and then start thinking how do you start going from this end to the other end, what is the journey getting there? That’s the modernisation concept and how you start modernising with the cloud first or cloud techniques,” Arachchillage says.

It’s not an all or nothing move, Mercer notes.

Jade is an advocate for the iterative mindset and continuous development.

“Pick something you can move with less complexity  to get some runs on the board for the business,” Mercer says. “It’s not like you have to invest for six or 12 months before you can show any value to the business, but picking something you can move forward, building that foundation because it is not just the technical aspects of the move down the slope that you want to deliver, it is the mindset as well and it’s developing that trust and safety culture within the business to test and learn and that runs through so many different facets, whether it’s tools and tech and process through to actually leadership and trust back up and down within the team.”

The TAL story
Australian life insurance specialist TAL is one company that has accelerated its modernisation and is now catching some air on that ski jump thanks to its work with Jade over the past four years.

The company, which will be showcasing the lessons it learned in its modernisation at the Competing with the Cloud Natives webinar, is one of Australia’s largest Insurance-as-a-platform initiatives.

TAL had a straightforward ambition: To ensure customers understand and value the protection they have and are confident that TAL will be there when needed.

A key player in the highly regulated – and fickle – BFSI sector, TAL has numerous core systems, but it also has a clear vision of where it wants to be: An agile, digital, cloud-first provider with a continuous delivery model.

Acknowledging where you are in your own individual journey and having a clear vision for the future is an important first step, Arachchillage says.

“Every organisation will have pockets of very talented people and modern cloud applications that have a greater level of maturity, because they started with new  Greenfields project and bubbles of high performing culture.

“You need to make sure those that are already well on the journey to modernisation don’t get slowed down, while at the same time bringing those on the legacy systems along on the journey and helping them get to that high level of maturity.”

A rigorous capability assessment formed the foundation of Jade’s platform uplift and DevOps work with TAL, which has since seen the insurer successfully onboard REST. a super fund among Australia’s top-ten in 2020.

Mercer says Jade embedded capability into TAL to help accelerate those pockets where change was warranted, creating blended teams to help uplift capability. It was, he says, a real strength of the project.

One key KPI is how frequently businesses can deploy changes to production and the lead time to change, and it’s something Arachchillage believes every business should be pushing to improve.

“If you look at the elite players – like Netflix, Google – they have done this investment years ago and they’re already on the back of this ski jump. They’re in elite group of maturity so they would be doing changes daily or hourly basis which is hard to get to if you’re starting the journey now.

“So rather than trying to compare yourself with other organisations, you need to go through your own journey and start challenging yourself for those KPIs. If you’re doing changes now on a quarterly or yearly basis as some organisation still do, bring it to quarterly or monthly. If you’re doing monthly changes, that’s great, now do fortnightly. Try to challenge yourself. “It’s like training for a marathon. You need to go at your pace but at the same time keep an eye out for other folks as well.”

Two in a box
Another key factor in TAL’s success has been its ‘two in a box’ approach to help it modernise with confidence.

The approach sees tech team members and business counterparts joining forces. In TAL’s case the GM of Technology Delivery and the GM of Platform Delivery, along with the CIIO, are championing the new delivery structure with technology and business platform owners leading the teams below them to create a unified vision.

Arachchillage explains that this has been a key aspect of introducing change.

“It’s a very different way of working to how most organisations work.”

If you want to hear more about how to compete with cloud natives and TAL’s journey, listen to the live webinar that was on the 25 November 2020.