News > The beehive gets a high tech makeover

The beehive gets a high tech makeover 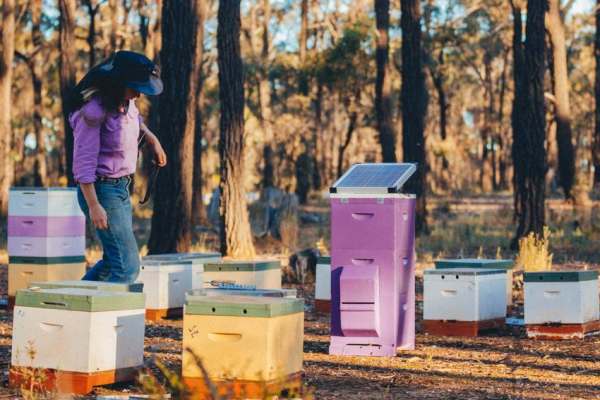 Saving the bees with solar powered IoT and AI…

The cheese maker launched its honey brand, B Honey, last month, and has also served up an initiative, the Purple Hive Project, which aims to protect Aussie bees – and the more than 4,500 tonnes of honey exported annually – from the destructive Varroa mite.

Australia is the fourth largest exporter of honey globally, behind China, Argentina and Mexico, and while much of the world’s honey production has been stung by the Varroa Destructor mite, Australia is one of the last countries still clear of the destructive parasite.

“It was clear we needed to invest in technology and innovation to support the future of our honeybees, beekeepers, and in turn, agriculture.”

The Purple Hive Project calls on a mix of technology, using 3D printed hives (robust enough, apparently, to withstand kangaroos scratching against them), with integrated 360-degrees cameras which scan each bee as it enters the hive.

An AI algorithm can tell the difference between a healthy bee and one carrying the Varroa Destructor mite and if a mite is detected an alert is sent instantly, enabling the hive to be quarantined immediately.

The hives are solar powered and self-contained, with the AI process completed on the Purple Hive device and most of the heavy lifting done at the hive – providing AI at the edge. That minimises 4G data usage, maximises image processing and makes the hives usable anywhere in Australia, the Purple Hive Project says.

The high tech early warning system was created for Bega Cheese by Vimana Tech, which provided the design and development of the physical hardware and IoT device, and computer vision specialist Xailient. The Vimana team also worked on the Mars Rover project.

While saving the bees means saving the supply of honey, the project’s aim is to go beyond that.

Deakin University has estimated that honey bee pollination contributes $4-$6 billion to the Australian economy, with honey bees the most prolific pollinators of food crops and one third of food we eat relying on pollination. Some crops, such as almonds, rely exclusively on honey bees for pollination.

“It was clear to us that we needed to invest in technology and innovation to support the future of our honeybees, Australian beekeepers, and in turn, Australian agriculture.”

McNamara says the plan is to roll the hives out at entry points to Australia – where bees might hop off boats and gain a foothold in the country. From there Purple Hives hopes to establish a mesh network, across Australia, with the Purple Hive attached to any beehive around the country.

The Project is also looking at global potential, helping provide a monitoring system for Varroa and potentially using it as a quarantine system to ultimately ‘push’ infected bees away from the hive to help eradicate the mite.

Oh, and what’s behind the purple of both the project name and the hives themselves? It’s a colour that bees apparently are drawn to, being able to see into the ultraviolet spectrum.