News > Rise of the cobot

Rise of the cobot 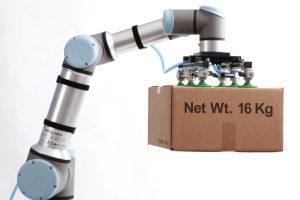 They’re small, easily taught, human friendly and, according to Facteon, they’re offering big potential for Australian and New Zealand manufacturers looking to get into automation.

They’re cobots, or collaborative robots. Usually smaller than their conventional industrial robot counterparts, a bit slower and with less payload capacity, but capable of working in much smaller spaces and without the health and safety restrictions of robots, which usually need to be shielded away from human workers.

Nathan Soich, head of marketing and new ventures for Facteon, says for New Zealand and Australian companies wanting to catch the automation and Industry 4.0 waves, cobots might just provide an easy entry point.

“Automation is for everyone now, not just the big end of town,” he says.

You get the automation, but cobots also tie in with the data acquisition and IoT side of Industry 4.0.

“And cobots are a good first step to automate some elements of your process not only because they are a lower cost option, but because they can be programmed far easier than an industrial robot.”

In fact, rather than having to program a robot in a system programming language, the robot can be manipulated manually for simple tasks such as stacking boxes or moving items, and simply learn the movements. More complicated applications do, however require programming.

Because of their smaller size and flexible nature, Soich says some businesses are deploying cobots which perform a number of different jobs, depending on what is required.

Soich isn’t alone in his enthusiasm for cobots. Markets And Markets is forecasting the collaborative robot market to grow from US$710 million in 2018 to US$12.3 billion in 2025, with market growth driven by the quick return on investment and low price of cobots, along with increasing demand for automation, improved human-machine interface and rising integration of AI.

The company says strong demand is being seen from automotive, food and beverage, healthcare, electronics and metals and machining industries.

Locally, Soich believes there is scope for the little robots across any industry from medical device manufacturing to some of the primary products businesses.

He says two key markets for cobots across Australia and New Zealand are in machine tending – where parts are being made in batches which need to be loaded and unloaded – and in handling  materials and packaging, such as palletising boxes.

Facteon is also working on applications around tightly controlled product which needs to be in a clean environment.

“Having a robot in there doing it, rather than a number of people handling the product, de-risks the process.”

Facteon, which was the internal engineering division of Fisher & Paykel Appliances before being spun out to become a smart manufacturing, Industrial IoT and factory solution specialist, has just signed a deal to distribute Universal Robots cobots across A/NZ.

The smallness and ability to work around humans is also a big factor for the A/NZ markets.

“The clue is in the name,” Soich notes. “Cobots, or collaborative robots, are robots designed to work alongside or in close proximity to people in a factory or any other facility.”

That’s part of the reason for them operating at a lower rate. “They need to operate in such a way that if one touches you the force isn’t enough to injure you and the cobot is able to recognise that it’s met some sort of object and stop immediately.

“There are lots of factories and businesses in New Zealand that already exist and the footprint or floorspace required for an industrial robot implementation might not exist. And a lot of tasks require people to be close to them, so the ability to have a robot which can work safely in close proximity is good.”

Robotics is one of the cornerstones of Industry 4.0, but it’s not just about the robotics, Soich says, with data feeds from robots also able to be fed into other systems.

“You’re making the data ingestion and validation of that data far better than someone manually moving something and then entering data into a system. The robot can just natively integrate with a system and give the data straight away.

“So you get the automation aspect, but cobots also tie in very heavily with the data acquisition and IoT side of Industry 4.0 as well.”

Facteon has already deployed systems where maintenance is no longer based on arbitrary setting such as a day of the week or month, but instead on the number of products run through a line or rotations or motions of a machine.

“It’s getting far closer to condition based maintenance.”

Performance of lines can be monitored more closely, right down to individual pieces of equipment, providing more granular information on how the line is operating in order to make improvements.

As to the cost, Soich says: “Businesses buy CNC machines, forklifts, vehicles, ERP systems and software. It’s a normal part of business operation and automation doesn’t need to be majorly out of step with that sort of expenditure. And you can deploy automation in a flexible way – you don’t have to come in and replace your entire factory, you can deal with pockets of automation to get started and then expand.”

“I think it’s a better idea than some people give it credit for. If I’m a worker and only have two hands and rather than pressing a button I can ask the robot to do it, surely that makes sense from an ergonomics point of view.

“Voice commands are more advanced in consumer electronic than in industrial automation, but you often see things bleed between the two, so watch this space.”