NZ eyes $7.9b boost from drones 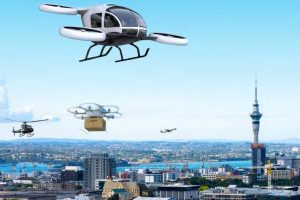 Will regulation help or hinder?…

New Zealand is eyeing up drones to help lift productivity – and the economy – higher, with a new report suggesting drone use could be worth $7.9 billion over the next 25 years. But the government focus on drones is likely to come at a cost for businesses looking to harness the technology, with a new report hinting at licensing and regulation to come.

The Ministry of Transport ‘drone integration paper’, Taking Flight: An aviation system for the automated age, says there are a wealth of benefits to be had from the use of drones, but integration of drones into the aviation sector means bringing drones and their operators fully inside the aviation regulatory system.

“This will require drone operators to pay their share of the costs of ensuring an integrated, safe, sustainable and responsive aviation and transport system,” the report notes.

“New Zealand is a world leader in the unmanned aircraft (drones) sector due to our good reputation as a safety regulator, our ‘open for business’ mentality and our risk-based regulatory regime,” the report says. It then stresses that being at the forefront means maintaining a regulatory and business environment which ‘supports the beneficial and safe development and use of drones to benefit New Zealand’.

“The Ministry of Transport is currently consulting on potential new powers”

“This requires a willingness to be bold, and to take a leading role in order to develop a new industry that will help lift productivity across a range of different sectors.”

For businesses looking to harness drones, their potential and promise is likely to ultimately come with an added cost, with the report noting: “If regular freight deliveries with drones and Urban Air Mobility services are to become a reality, we will need to consider issues such as infrastructure requirements, and the appropriate licensing system for operators.”

That could see New Zealand following in the footsteps of Australia, where CASA plans to introduce a drone registration and accreditation scheme later this year.

While that scheme hasn’t yet been finalised, the proposed registrations will impact all commercially operated drones and any recreational drones larger than 250 grams, and will require completion of an online training course, registration for flyers and flyers under the age of 16 to be supervised by accredited flyers.

Meanwhile, back in New Zealand, a cross-government and industry approach has been initiated, with the UA Integration Leadership Group, which includes the Ministry of Transport, CAA, Airways New Zealand and MBIE, providing strategic guidance and oversight. A cross government group is also providing a forum for agencies to collaborate and coordinate on drone integration issues and engage with industry on operational and technical advice.

Transport Minister Phil Tywford, says a number of initiatives are also underway around safety, including looking at potential updates to the rules for using drones.

“The Ministry of Transport is currently consulting on potential new powers for law enforcement agencies to seize or detain drones that are breaking the rules,” Twyford says.

As to the economic and productivity benefits which New Zealand could reap from drones (of which there are more than 77,600 according to 2017 figures), the report says they range from helping transform the broader aviation sector, enabling it to take advantage of new and emerging technologies, to delivering economic benefits by undertaking time-intensive tasks, such as monitoring stock and crops; expensive tasks such as power line inspection and risky jobs, such as emergency services.

There’s also potential to change the way we move goods – and people ­– with drones enabling rural freight and goods delivery to help connect regional businesses to suppliers in areas where land transport is more difficult, and as a complement for emergency services for fire mapping, searches, crash site forensics and post-disaster monitoring.

And while many might have scoffed, or at least been sceptical about passenger drones, the Ministry of Transport appears to be optimistic about their future, saying regional passenger transport by drones could be worth $1.4 billion over the next four years and noting New Zealand is already at the forefront of this development, with one company already testing its aircraft here’.

That’s a reference to Air New Zealand’s partnership with Zephyr Airworks (bankrolled by none other than Google co-founder Larry Page). That less publicity hungry initiative already has a prototype pilotless electric air taxi, dubbed Cora, in trial in the South Island.

The potential for companies to test and develop drone technology in New Zealand is also touted, with the report noting it could lead to increased R&D activity and an uptake of cross-disciplinary technology across sectors.

Get it right, and the payoffs for New Zealand could be big.

The Ministry of Transport report says it expects drone usage in New Zealand may undergo growth in line with that forecast for the United States, which is expecting recreational use to growth threefold between 2016 and 2021, with commercial use increasing by a factor of 10 in the same time.