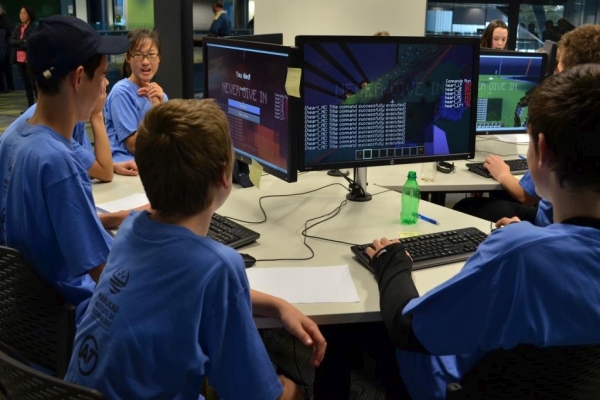 Programmers of the future get their feet under the desk…

With skills shortages routinely highlighted as a problem for business at large, it makes good sense to get younger generations interested and active in the technology industry. That’s just what 120 teens set about doing at the start of the school holidays as they stuck into a fierce coding competition at JHack, New Zealand’s first junior hackathon.

Organised by the Manukau Institute of Technology and IT industry partners, the event took place over the first weekend of July. Working in teams of three under the guidance of 30 IT industry mentors, the teens programmed against the clock and each other to manipulate coding in Minecraft.

Organiser Edwina Mistry said the competition gives the kids a head start in coding: “We’re blown away by their enthusiasm. In the month leading up to JHack, the kids had completed more than 2,500 hours of programming in our online challenges.”

For fourteen year old Grace Hollamby from Glendowie College, JHack has motivated her to think about programming as a career. “I’ve always wanted to have a talent for something and I think I’ve found it,” she said.

Daniel Martushev, HP master technologist JHack mentor pointed out that demand for IT work in New Zealand is ‘phenomenal’. “There’s a huge skills shortage in the IT industry. We’re trying to get these kids to become part of the digital economic future that’s unfolding globally. We want to show them that technology can be fun and interesting, and then show that you can make a living out of it.”

Learning about teamwork was particularly important to twelve-year-old Paige Stephen, from Whangaparoa College. “We’re working well as a team because we’re communicating and cooperating. You can do a lot of things using code, and it’s fun to learn,” she said.

JHack was organised to encourage teens to think about a career in NZ’s digital industry, which has grown by 9 percent annually for the past seven years. In 2014 alone, the number of ICT jobs in NZ increased by 2,800, and the sector now employs more than 26,700 people.