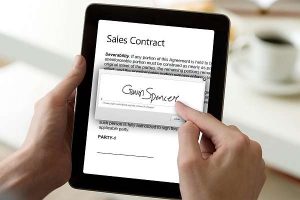 Property sales agreements signed without pen ever coming into contact with paper? Yes, it’s now possible – and about time too. Just such a real estate deal has recently been ‘signed’ in New Zealand, and according to Realforms, the company behind the tech, it’s a world first.

“This is the future of the way business will be done in real estate,” says Realforms CEO Jordan McCown. “It’s great to be a leader and partner in it”.

“This is the future of the way business will be done in real estate.”

The deal was finalised in Christchurch using the Realforms platform last week, and is believed to be the first in the world to be both legally-binding and completed 100 percent paper-free. Using the Realforms web application, the sale and purchase agreement was drafted, e-signed, negotiated, edited, accepted and finalised all without the cumbersome process of handwritten changes, initialing, printing and scanning.

But why New Zealand?

Simply put, looser legislation in New Zealand allows such agreements to be signed off 100 percent digitally – something not the case in Australia. In fact, Realforms originally planned to launch the product in Australia, but the country’s e-signature legislation is ‘archaic’ in comparison to the more modern and open regulations in New Zealand, says McCown.

“Our digital S&P can be used from Cape Reinga to Bluff and e-witnessing is legal in New Zealand. New Zealanders and their government should be proud of this milestone.”

Realforms’ agreements are completed through a web-based app, which includes functionality to improve the compliance process (such as digital change highlighting, mandatory file uploads and an accessible audit trail) and stored in the cloud.

And in case you’re wondering, no, there’s not a single mention of blockchain technology in sight.

The technology certainly has the potential to tidy up the currently unwieldy and paper-based purchase agreement process, but may not be a magic bullet solution for the industry as a whole. Nevertheless, it’s a step in the right direction and well overdue says James Marshall, director at Harcourts Charlton Realty.

“This is a great tool for bringing a deal into the digital age,” Marshall says.

“Whilst the technology wouldn’t be used in the majority of consumer-driven negotiations between the parties, there is a genuine need for this, particularly when transactions are going back and forth across great distances.

“No more copies of copies with sun fade on the documents, and from a legal perspective, e-dealings provides a clear audit trail of any changes to the document – overall great technology but a limited market for it, particularly when there is a need for face to face negotiations.”

Currently around 3000 users are already signed up – including Harcourts, Ray White and Auckland Council – with pricing starting at NZ$19 per user for unlimited agreements.