Retail not alone with omni-channel complexities 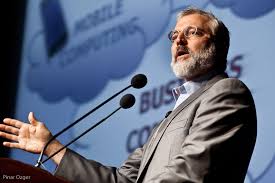 Businesses today are breaking down traditional models through the use of omni-channel systems NetSuite CEO Zach Nelson told delegates at the NetSuite World conference in San Jose this week.

In a razzle dazzle opening presentation based on the theme ‘Transformers’ the cloud ERP’s charismatic CEO talked about the need for businesses to run multiple channels to market.  “Your company is no longer a distinct silo. There are incredible pressures on your business model. There are new business ideas that are forcing you to rethink how you do business,” he told the 6500 attendees.

“Omni-channel, product and market complexity, and future-proofing” were the three big ideas that he wanted to leave with the audience, but not before launching into what has become his annual bash of his ERP rivals, bagging Microsoft Dynamics, Sage and SAP.

Nelson exuded pride as he rolled out his latest favourite customers, including the $4.6 billion Shaw Carpets which recently moved its manufacturing operations to China, and the CTO of the Texan Office of the Comptroller which has built an eProcurement system on NetSuite for the State’s administration. The scale of the latter’s TxSmartBuy was indeed impressive, with $1 billion of the State’s $100 billion in spending already going through the G2G portal.

Nelson also charmed the growing numbers of partners in the NetSuite community saying that the 40 percent of sales he’d “begged” out of the channel created an active network to build the functional depth that is lacking in the product “we have the breadth but we quickly run out of depth in some industries,” he admitted to press in the post-speech questioning.

Nelson received applause as he unveiled a much-anticipated release of the application’s user interface, which has been completely re-engineered “using the principles of flat design and leveraging HTML5 to create a responsive tablet-friendly application”. The suite is also available as an iOS app. The new user interface will be rolled out in the 2014.2 release, which is scheduled for Q3 this year.

The second of three product announcements that align with Nelson’s three big ideas was a B2B commerce module within SuiteCommerce which will improve the B2B support of the eCommerce engine. A strategy that is, according to NetSuite, strongly predicated on an “Amazon-like experience” for B2B buyers trading on the platform.

The third was SRP (Services Resource Planning). Targeted at professional services organisations, SRP integrates components of the separately acquired AirCloud PSA tool into the core NetSuite product. Nelson saw this as a major benefit for product and services companies, saying that NetSuite was the “only product that can handle products and services through to billing”. NetSuite considers its SRP as MRP (as in, Manufacturing) for services oriented businesses, allowing end-to-end management of projects, products, resources, time and billing. It demonstrated its nifty search, drag and drop resource allocation tool, the ease of which was a little disconcerting for some of the humans in the room!

Nelson was upbeat about the company’s latest Q1 financial performance. Its 34 percent year-on-year revenue growth, US$20 million operating cash flow and healthy US$452 million of cash in the bank are an indication that it is in good financial shape. The share price has fallen 37 percent in the past three months to be around US$73, somewhat faster than the general slide across the Nasdaq. The cash will be needed as staff numbers will grow by a third this calendar year. Six hundred of the new recruits will be in the R&D team, and most of these in the Czech Republic.

Commenting in the post-keynote press conference Nelson confirmed that revenue growth was the key metric, pointing at a McKinsey report that indicated it is the mark of successful tech companies. He also indicated that the average revenue per customer, which current sits at US$50,000, was increasing as larger retail and omni-channel clients come on board.