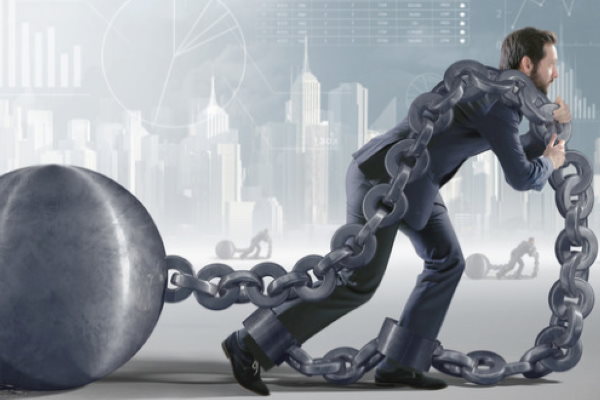 Technical debt, an all too common occurrence in most businesses, is hampering innovation for 69 percent of companies according to a new report, which shows 61 percent of IT leaders also believe it is dragging down company performance.

As organisations expand their technology stack, they often amass technical debt, in the name of speedier deployments. To an extent it’s a symptom of ongoing innovation.

But the study shows technical debt – ‘the coding you have to do now because of the shortcuts you took yesterday’ (or more specifically the technologies and time spend maintaining old, bad and broken code, rather than developing new ideas) – is taking a big bite out of company budgets.

Enterprises spend 41 percent of their IT budget addressing technical debt.

On average businesses are devoting 28 percent of their IT budget just to address technical debt, compared to 33 percent for innovating and building new capabilities and just shy of 40 percent spent running status quo operations.

And the news gets worse as the company gets bigger with technical debt, like any debt, compounding. Enterprises spend 41 percent of their IT budget addressing technical debt and just 30 percent innovating and building new capabilities.

While there are manifold reasons for technical debt, The Growing Threat of Technical Debt says two leading factors are the high number of development languages, making it complicated to maintain and upgrade systems, and turnover in development teams leaving new hires in charge of platforms they didn’t create and ‘may not fully embrace or understand’.

Other leading contributors include companies accepting known defects in their rush to meet release deadlines – something 43 percent admitted to – and the presence of outdated development languages and frameworks.

“All these factors make it hard for businesses to maintain and rework critical systems – and won’t disappear on their own. In fact, the increased demand for digital tools that businesses experienced during the pandemic will persist in 2021 and beyond, threatening to exacerbate the problem for companies of all sizes.”

All that technical debt isn’t just a financial drain, it’s proving a major roadblock to innovation and recovery. Twenty-one percent of the 521 IT decision makers polled globally (including Australia) strongly agreed that it is a fundamental limit on their organisation’s ability to innovate, while 48 percent agreed with the statement. And 44 percent agree it will have a major impact on their business in the future, with 20 percent strongly agreeing.

According to the report, commissioned by low-code application platform vendor OutSystems, reducing the debt is a daunting task. Key priorities for most are reducing turnover in the development team and reducing the number of development languages and frameworks – logical solutions given they are the two areas companies identified as being the biggest issues causing the debt in the first place.

But those foundational issues aren’t the be all and end all. Once addressed, companies say they’re planning to focus on growth opportunities, removing challenges in serving new markets or segments; addressing regulatory defects due to new regulations and addressing incorrect architectural decisions.

There are also a slew of lower priority issues companies are looking to resolve, from repairing unexpected defects or mistakes that became evident after release and removing security defects due to evolving threats, through to improving staff capabilities to leverage new technologies and replacing the outdated development languages and frameworks.

“The good news is that it’s entirely possible to ‘pay off’ technical debt creating a development process that meets both short-term deadlines and long-term strategic goals. By carefully aligning modern application development platforms, organisational structures and team priorities, any company is capable of steadily chipping away at their debt without compromising the timelines of their current projects.”