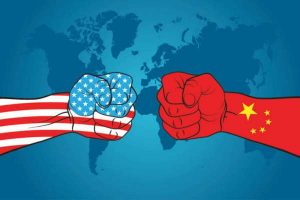 This is not normal…

As the US push to oust Huawei from its networks – and the networks of its allies – continues, other companies too are likely to be feeling some trepidation, with the ramifications of the ban rippling beyond Huawei and the US.

Huawei filed a new legal action motion overnight as it seeks to bring an end to the US ban – and ongoing spats (including tit for tat arrests) between the company and the country.

The world’s largest technology equipment maker, largest provider of equipment for 5G networks and number two smartphone brand has found itself on the receiving end of ongoing action from the US.

Huawei’s latest action follows a lawsuit it filed back in March over a ban on the use of its telecommunications equipment.

US action stepped up this month when the United States Department of Commerce put Huawei and 70 other companies on an ‘entity list’, requiring the company to get a government license to buy or transfer American technology. Just days later, Google announced it would hold back Android updates for its flagship apps and services – including Gmail, maps and search – from Huawei, noting that existing Huawei smartphones in-market will continue to be supported.

Chip maker ARM has also said it will stop supplying Huawei, with Intel and Qualcomm also parting company with the embattled Chinese vendor. The Wifi Alliance – which sets standards for WiFi, ‘temporarily restricted’ Huawei, which has also been ousted from memory card storage standards body, the SD Association.

The United States later temporarily eased some of the trade restrictions, with a 90-day authorisation allowing the company to continue to buy US made goods to maintain existing networks and provide software for existing handsets.

US$11 billion of Huawei’s $70 billion annual procurement budget goes to big name US IT companies.

That move indicates the far reaching effects the ban will have on the wider supply chain, with the authorisation designed to give companies relying on Huawei equipment time to make other arrangements.

The US has campaigned heavily for a number of months for other countries to ban Huawei for 5G network builds with Australia agreeing to a ban, and the New Zealand Government Communications Security Bureau blocking a proposal from telco Spark to use Huawei equipment for its 5G build.

Last night Song Liuping, Huawei chief legal officer, hit out at the actions of the United States government, saying politicians were using the strength of an entire nation to come after a private company and try to put it out of business.

“This is not normal. Almost never seen in history,” he says.

“The fact is, the US government has provided no evidence to show that Huawei is a security threat. There is no gun, no smoke. Only speculation.”

In a clear reference to the ongoing US-China trade war, Liuping said US politicians are using cybersecurity as an excuse to gain public support for actions that are designed to achieve other goals and said the moves set a dangerous precedent.

“Today it’s telecoms and Huawei. Tomorrow it could be your industry, your company, your consumers.”

Ramifications beyond Huawei
While the US action has serious consequences for Huawei, it also has ramifications far beyond the telco vendor.

Liuping claims by preventing American companies from doing business with Huawei, the government will directly harm more than 1,200 US companies, affecting ‘tens of thousands of American jobs’.

The company has previously said it spends more than $1 out of every $7 – or around US$11 billion – of its $70 billion annual procurement budget on equipment from big name United States IT companies such as Google, Qualcomm, Intel and Microsoft. Around one third of Huawei’s suppliers are American companies.

Since the May 16 blacklisting, some semiconductor manufacturers have downgraded their sales forecasts – indicative of the reach Huawei has.

Political risk advisor Eurasia Group has said that full implementation of the entity list would impact not only Huawei, but its global network of suppliers.

“The firm would be unable to upgrade software and conduct routine maintenance and hardware replacement,” Eurasia analysts said. “It would hit virtually all of Huawei’s products, including high-end smart phones, mobile infrastructure, data centres and cloud services.”

In the US, smaller telcos are also staring down the barrel of hefty expenses, with rural providers in particular likely to bear the brunt.

Huawei’s inexpensive wireless communications equipment is in use by many telcos globally. It’s long been favoured over the more expensive European offerings and has a strong foothold in many networks – including down under.

But NBC News reported that telcos in thinly populated areas are now facing billions of dollars in costs to upgrade – costs that could be out of reach for some, despite talk of some government assistance, and which could leave parts of rural America with no cell service.

NBC cited the example of rural Kentucky and Tennessee provider SI Wireless which has 20,000 customers and is facing a bill of US$40 million to US$60 million to replace Huawei equipment. Another provider with just 40,000 customers and 75 percent of its network equipment coming from Huawei, faces a bill of around US$300 million. That’s an average of around US$5,800 per customer.

Last year action by the US against ZTE saw Qualcomm – a major supplier of chips for ZTE’s phones – caught in the crosshairs and ZTE forced to shut down. The ZTE ban has since been lifted after the company agreed to pay a $1 billion fine, plus $400 million in escrow and replace its board and senior management, and ZTE has since returned to trading.

Retaliation concerns
The actions have prompted concerns of a tit-for-tat war with technology companies – particularly Apple – potentially caught in the middle.

While Huawei and Apple have no direct links, the US iPhone maker has repeatedly been identified as a potential target should China chose to retaliate. Not only is China a key growth market for Apple, but the company is heavily reliant on components and manufacturing from Chinese suppliers.

The US actions have already reportedly caused a backlash against Apple in China, with consumers switching allegiance to Huawei, and other domestic brands, in retaliation against the US. Increased tariffs are also hitting home, with analysts cutting their projections for Apple.

Huawei CEO Ren Zhengfei has however said he’s opposed to any retaliatory action from Beijing, going as far as to say in an interview with Bloomberg that he’d ‘be the first to protest’ if such action was taken against Apple.

Chinese state media has issued warnings that restrictions are likely to be imposed on rare mineral exports to the US, which relies on China for 80 percent of the elements that are essential in the manufacture of modern smartphone and auto EV batteries.

The uncertainty around Huawei has seen New Zealanders and Australians become more skittish about the company’s handsets.

Liisa Matinvesi-Bassett from PriceSpy NZ says Huawei handsets have slumped in popularity on the site, receiving 28 percent less clicks in New Zealand in the week following the US ban. That’s a trend PriceSpy is reporting globally, with clicks dropping by up to 46 percent in other countries.

Huawei meanwhile, has said it has its own operating system, which it will use to replace Android, in the works, though it’s unlikely to launch until late 2019 for the Chinese market and 2020 globally.

The major challenge facing Huawei’s developers is to create a platform that operates seamlessly with the standards set by the ubiquitous global app marketplaces controlled by Apple and Google.