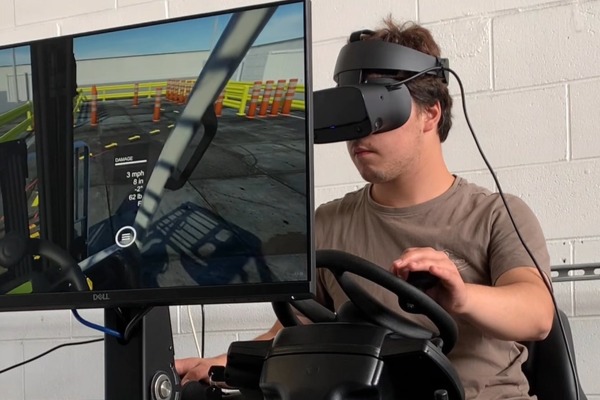 While the simulators have proven popular in the US and Europe, Stone says there was very little information from Forklift Simulators about the training effects. What Stone and his team discovered has left them impressed.

“It’s wonderful to have an objective measure of skill being the determinant for competency.”

“We found if we started [students] green as a greenhorn and slowly took them through the VR, on day five they tested up a bit like someone who has been in the job nine months.

“On day seven they tested up – in independent testing – like someone who, with a little more confidence, would look like an 18 month to two year driver.”

That statement highlights one minor drawback to the virtual reality training: It doesn’t give them the confidence or flow they would get from being a long-time forklift operator.

“But in terms of the technical skills of safety and efficiency that’s the part that measures up years in advance, within a few days of being on the sim. And we got very excited about that – and so have a lot of employers.”

Those graduating from the two week program are averaging three to five job offers despite not having previously worked on forklifts.

“And they’re not the usual short term contract staff but permanent fulltime offers and they’re sometimes up to 50 percent of a premium of the minimum wage, well ahead of a what an entry level person would ordinarily get paid,” Stone says.

The program is funded by the Te Ara Mahi allocation of the $3 billion Provincial Growth Fund, which has consistently courted controversy over the projects funded, with little to show for many of the investments.

Whiti is currently running its fifth intake for the cadetship, with 95 percent success in finding full time employment after training. All 12 in the last intake are now in employment. Those 12 account for one percent of all Kiwis to come off the unemployment benefit last week, and Stone says as many as 150 to 200 graduates a month could be produced.

He says the training is filling a critical need, with longstanding shortages of forklift operators around primary production, and the growing demands from a surge in online shopping putting further pressure on the market.

Behind the success of the training is the ability to put students through situations they couldn’t experience in real life training.

“There is no way to train actual competency performed tasks. If you took the simulator away the only way to do it would be to put them in a real forklift. But even then you can’t put a pedestrian next to them to see how they react. You can’t tip over a load and see how they would react because that’s as dangerous as heck and no one in their right mind would do it,” he says.

“We’re able to put them in scenarios and extend their learning really rapidly in the simulator. It wouldn’t be possible, all this competency training, without the simulator. And that’s the problem with forklift drivers today – you can’t give them experience without putting them on the job, but that’s a mighty dangerous thing to do because frankly, forklifts are lethal weapons.

“The simulator is a safe but superb learning tool.”

Industrial training and health and safety are two key areas where virtual reality is starting to shine.

IDC has forecast spending on augmented reality and virtual reality to hit US$160 billion in the next couple of years, with commercial use cases including training, industrial maintenance and retail showcasing receiving the most investment.

Virtual reality is already being deployed across a range of sectors. Northland and Australian firefighters are using immersive virtual reality, developed by Melbourne’s Deakin University and incorporating a heat vest, to hone their decision making skills from the safety of a classroom. Others jumping into the technology include the Australian Air Force, large mining companies, New Zealand’s frontline biosecurity teams, the Belgium Navy, Netherlands Airforce and the US Airforce.

And its not just for those in dangerous occupations: PwC’s The Effectiveness of Virtual Reality Soft Skills Training in the Enterprise report says using VR to train employees on various soft skills including ‘inclusive leadership’ was more effective than classroom and e-learn training. Trainees were more confident to act on what they learned after training.

The Whiti course wasn’t just virtual training though. Trainees were put through ‘transitional forklift training’ on real forklifts to ensure they could convert what they learned in the simulator into the real world. (There was also a range of classroom training required.)

Trainees only spend around three hours on the simulators, but it has to be spaced out with many using virtual reality experiencing a version of motion sickness.

“We stage it out very carefully over the six to seven day training block. But we could get it down to three days if we wanted, but it would still need to be broken up and spread out.”

Stone admits the virtual reality units don’t come cheap. Each unit comes in at around the price of two real forklifts. Whiti has two in action already, with another three arriving in New Zealand next month.

Because the offering is fundamentally a software product, if someone in the world wants a particular task or scenario coded, it becomes available to everyone. Like a new software update, it’s just downloaded to the simulator, providing Whiti with ‘an extremely advanced and modern set of modules that some places in New Zealand couldn’t even imagine’, Stone says.

Over the next three months the programme will roll out to Mount Maunganui, South Auckland and Hornby in Christchurch. A secondary, shorter course, focused on hard competency training only, will be piloted in June.

“We have other industrial training concepts we’re very quietly cooking up in the background. But we need to focus on the forklift one and get it into a much bigger more robust mature state before we go tinkering with forestry or wheel traction rollers for diggers and things, which are obvious places for us to go.”

There’s one final benefit to the virtual reality training that has Stone excited: “The simulator doesn’t discriminate.

“It doesn’t matter where you go to church, what colour or gender you are. It just wants to know if you can do the job or not and it’s wonderful to have an objective measure of skill being the determinant for competency. We’re all quite chuffed that that’s the only thing that matters.”