News > War in the digital age

War in the digital age 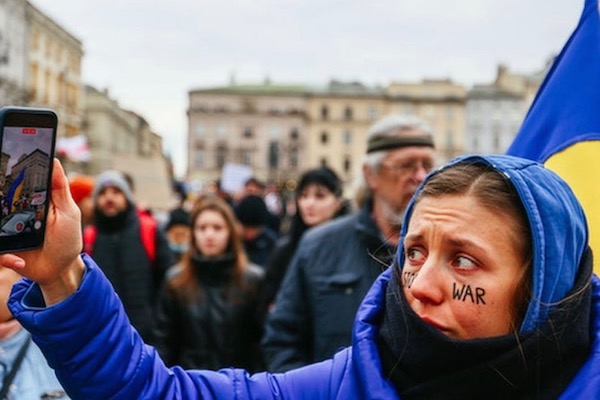 The new tech-savvy face of war…

When Russia launched its unprovoked assault on Ukraine three months ago, Ukraine rallied its troops, including the digitally savvy.

While the Ukrainian fighting spirit, aided immeasurably by its President who has remained front and centre throughout the past three months, were no doubt key in destroying Russia’s hopes of a quick ‘victory’, technology has played an important adjunct.

AI, 3D printers, satellites, drones, a 300,000 strong IT army, crypto, prebunking – and a very rapid Starlink upgrade – have all been part of the response.

Videos from the battlefield of missile launches, destruction of critical assets and the effects of Russia’s military aggression on Ukrainian civilians, combined with drone and video footage have made the Russian invasion the most internet-accessible war ever. They have also undermined the Kremlin’s war-washing efforts by shining an undeniable light on activities on the front.

It’s played out on TikTok, Twitter, YouTube, Facebook and other internet platforms, keeping the conflict in the public eye and appealing to humanitarian empathies for Ukraine, while reinforcing the horror of Russia’s aggression.

But social and communications isn’t the only way technology is playing a role in the situation, with Ukraine’s tech sector proving itself a study in agility, harnessing commercial technology for military use – and for its ability to get support from big tech.

AI, 3D printers, satellites, drones, a 300,000 strong IT army, cryptocurrencies, pre-bunking of disinformation – and a very rapid Starlink upgrade – have all been part of the Ukraine response on both the digital and real world battlefield.

3D printers have been used to add tail fins to outdated Soviet anti-tank grenades enabling them to destroy Russian tanks and armoured vehicles by launching from commercial drones, creating a cost effective solution – apparently just $100 for the grenade and $1,000 for the drone (though signals were apparently blocked by Russia in many cases).

Since the beginning of the war, Ukraine vice Prime Minister and Minister of Digital Transformation, Mykhailo Fedorov, has appealed to remote sensing and satellite comms companies to provide assistance. And they have. With speed. Within days of the February 24 invasion, and just 48 hours after a request from Fedorov, SpaceX’s Elon Musk tweeted an image showing a truck of Starlink satellite connectors heading to Ukraine.

Musk later tweeted that Starlink had fought off a Russian jamming attack in Ukraine, with a Pentagon official later saying the company’s rapid software update to more than 2,000 satellites to fend off the cyberattack was ‘eye watering’ while a US Defence official said Starlink had countered the attack faster than the US military would have been able to.

A call for commercial satellite companies to share imagery and data directly with the Ukraine, meanwhile, reportedly saw at least five providers agreeing to help.

On the AI front, US company Primer modified its commercial voice transcription and translation service to listen in on intercepted Russian communications, and automatically highlight the ‘most relevant information’ to provide what Primer says is ‘robust near-real time intelligence’. There’s no word though on whether the Ukrainian military are actually using Primer.

Fedorov, at just 31 years of age, has been a key figure in the digital attack. As Digital Transformation minister, he’s been working to build the country’s tech profile and to partner with global tech giants.

Prior to the war, Ukraine was dubbed a country of emerging technological innovation with IT the second largest export industry and a string of companies including GitLab, Grammarly and Mailtrap.io emerging from the country, while global giants including Amazon, Google, Oracle and Samsung opened R&D centres there.

Now, instead of digitally transforming the country, Fedorov finds himself repurposing digital tools to instead fight a digital war.

“A month ago, we all worked on FaceID and CRM systems to process calls for eServices. Now, we work on automatic identification of occupiers’ corpses and autodial Russian subscribers to tell the truth about the war. We have all changed. And we all do different things,” he tweeted.

Among the offerings is the eVorog chat bot in Telegram, which enables Ukrainians to record via photos or videos the movement of Russian equipment or invaders, sending the exact geolocation to Ukraine forces. The app uses verification from the government Diia app to ensure only Ukrainian citizens can use the service. It’s a n offering that has enabled the country to create a 300,000 strong ‘civil intelligence’ unit.

Civilian volunteers – some 270,000 of them globally – are also being used to counter the disinformation campaigns for which Russia is so well known and which began pre-invasion. But they’re not just debunking them. Along with US and Nato allies, they’re ‘prebunking’ them – preempting false narratives by debunking the lies before they are even shared.

When a poor-quality deep fake of President Volodymyr Zelenskyy appeared calling on his soldiers to lay down their weapons and return to their families appeared, social media platforms were quick to swing into action, with Meta saying it removed the video from Facebook and Instagram and alerted other platforms. Twitter also removed it if it was displayed without comment or held up as genuine.

Zelenskyy himself was quick to post across social media channels. “Do not believe the fakes. I am here. We are not putting down arms.”

Technology is also playing an important role in cutting through the fog of war. Satellite images from space-tech company Maxar of murdered civilians in Bucha, matched with videos recorded weeks later of bodies on the roadside, have provided strong evidence of war crimes, bolstering Western support and helping prove untrue the Russian claims that the atrocities were committed after they left the city.

Satellite has of course, long been used in wars, but this time around it’s commercial companies with access and the difference is in the speed of public availability. This information isn’t being kept hidden. It’s on full view for the entire world to see.

President Zelenskyy noted at a United Nations briefing “It is 2022 now. We have conclusive evidence. There are satellite images. And we can conduct full and transparent investigations.”

But Ukraine’s true mastery appears to be in its nous in using social media for near real-time updates (aided by civilians posts) – and that ability to rally big tech and get swift action from them.

President Zelenskyy has delivered daily updates via social media, while appearing virtually at events from the World Economic Forum in Davos to the Grammys and the Cannes Film Festival, ensuring the conflict remains in the public eye, while also raising the morale of Ukrainians.

His updates are tailored for 2022 – short videos, selfie-style, with clear and effective messaging. In what is perhaps a good lesson for some politicians and leaders much closer to home, his communications are short, recognising that in times of stress people don’t want the PR spiel, they want clear consistent messaging that’s easy to understand.

He’s consistently pleaded with the public, both in Ukraine and globally, to continue to spread the message about the conflict using social media.

“Support us in any way you can. Any, but not in silence,” he says.