Getting the JobDone: How software helps top farmer boost operations 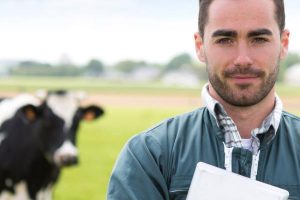 Easy to use mobile solution keeps farmer and workers connected…

Faced with the difficulty of maintaining oversight on his farm when business took him away from the property, farmer Greg McCracken joined the team of early adopters trialling JobDone. This complete farm management solution equips managers and every team member with a smartphone-based system to take complete control of operations, providing records of work to be done, immediate access to health and safety requirements, and ‘JobDone’ confirmation after completion of every task.

A dairy farmer in Wellsford, north of Auckland, Greg McCracken has a herd of some 700 cows. Deeply involved in the local community, McCracken is an elected member of the Fonterra Shareholders’ Council for the Southern Northland area and is the chairman of the Lower North Partner Farm. He holds a variety of community and dairy-related positions including chairman of the Wellsford Vet Club, chairman of the Tomarata School and has been involved as a judge in dairy industry awards.

Situation
Running an agricultural operation effectively depends on close attention to detail – but for many farmers, being on-site all the time simply isn’t possible. That leaves open the possibility for scheduled tasks to be partially completed or neglected, for health and safety regulations to be bypassed, and for staff members to simply forget what is required of them on any given day.

“The usual way of planning was to sit down in a weekly meeting and plan the jobs for the coming seven days. With the number of outside events in which I am involved keeping me off the farm for a few days each week, this system proved lacking. There was no way of tracking whether jobs were getting done, or when they were finished, or when they were started for that matter,” McCracken explains.

He notes that in the unpredictable environment of a farm, the issue isn’t a case of staff members being idle or seeking to avoid work, but rather that all too often, something else more pressing would crop up. That meant many jobs might be started, but not finished; or, with attention taken elsewhere, scheduled work might fall behind and be forgotten. “With many these sorts of incidents cropping up, there had to be a better way to take control and manage affairs,” McCracken says.

Solution
Working together with AgriTech firm JobDone was the resulting ‘better way’ The cloud-based software as a service solution works on any mobile device and is suitable for operators in the agricultural and horticultural industries.

Effectively a collaboration, workflow, scheduling and timekeeping solution, JobDone equips farmers to manage people, jobs and tasks remotely or on site. “What I was after was something which would show where a staff member starts and finishes a job, and which could also provide evidence that it was done properly. If it wasn’t done properly, it is useful to know who did it and what went wrong,” McCracken relates.

The system allows McCracken to allocate tasks to his staff members, who receive their jobs for the day on their mobile phones. At the start of each job, any applicable health and safety requirements are brought to the attention of the worker, who must confirm that the measures have been fulfilled. JobDone even takes the staff member through the steps involved in every task, ensuring that things aren’t forgotten or neglected. For example, when servicing the tractor, each item is listed and must be checked off, right down to replacement of the sump plug.

Jobs can be fluidly shifted between staff members and re-prioritisation, should the unexpected occur (it usually does) is made simple. With a record of jobs started, but not finished, workers now never need worry about forgetting to go back to those tasks which were interrupted when more important things cropped up.

And while time management wasn’t a particular focus for McCracken, JobDone provides that all the same, as the ability to record the start and finish of a task means there are accurate records of who has spent how much time on what.

Results
The most obvious benefit of the introduction of JobDone is that staff members always know what they need to do on any given day, says McCracken. At the same time, he enjoys a clear understanding of the situation on the ground even when attending to other business.

“Without doubt, this system gives every staff member more focus on the jobs that he is doing. That means the completion rate is way up. As soon as the worker checks their phone, they see what needs to be done, what has been finished and what hasn’t – and you know how often people check their phones these days,” McCracken confirms.

“As soon as the worker checks their phone, they see what needs to be done, what has been finished and what hasn’t – and you know how often people check their phones these days.”

A side-line benefit, he adds, is that because JobDone provides records of when people log on or off, he has noticed his team members have become more punctual. “I’m not a clock watcher, but they are a competitive lot and make a few comments between themselves if anyone looks to be a slacker,” he quips.

Because the system integrates with the hardware on today’s smartphones, JobDone provides an easy way to record information on the farm. Pictures can be taken, in addition to making notes or recording video, so when issues are encountered, the whole team is equipped to understand the challenge and contribute to its resolution.

“When I’m out of town, it is a breeze to stay in touch with the boys and see what’s in progress. When notices or new tasks are posted, everyone gets them and must acknowledge receipt, so information can’t be ignored. It saves me the time of having to txt and wonder, or ring someone up.”

A big question is how staff members feel about the system; McCracken says that at first, it was viewed with some suspicion as a potential ‘big brother’ surveillance effort. “That’s soon given way as the boys quickly saw how it improves their performance, delivers the information they need to get tasks done properly and provides the health and safety precautions they need to put in place for every job. It also equips them to be more in touch with me, so if they encounter problems and need help, it is right at hand.”

Summing up the value of JobDone, McCracken says it has enabled his farm to become more organised, safer and better managed. “Once you use this system, there is no going back. It uses the smartphones we all have today, which makes it very easy to install, and it transforms operations. It’ just a better way to farm.”