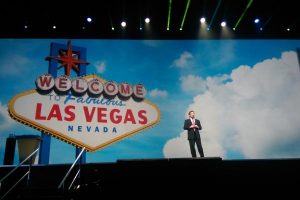 Speaking ahead of the Pegaworld conference in Las Vegas, Trefler described as “dribble” some of the claims for cloud computing, and was scathing of the way the cloud was being adopted by some organisations.

“I see customers go to big cloud companies and then do nightly batch feeds of customer data. How stupid is that – how does that fit with any idea of the connected company?” he said.

The overwhelming majority of Pegasystems customers for its CRM and business support platforms are still on premise users. So far just 100 customers have migrated to the cloud based Pega solution, which is hosted for the company by Amazon Web Services, though some of those are sizeable enterprises, including British Gas.

Cloud certainly has a role according to Trefler – though he was critical of suggestions that cloud was the solution for everything.

One benefit of cloud however was that; “It’s put appropriate pressure on unresponsive IT departments …and software vendors that had grown big fat and happy on 22 per cent maintenance fees.”

However he noted that; “There are a lot of cloud delusions out there – the notion you put everything out there and it works brilliantly has been proved to be simplistic.”

The company has reworked its platform so that it can run equally happily in the cloud or on premise. It means that it’s not a “frankenstack” of glued together components, said Trefler.

The platform also, he says, offers “Functionality that Salesforce can’t touch in their dreams.” Which gives clue to his nemesis.

Trefler, who appears more engineer than slick corporate salesman, seems clearly frustrated by the success of what he considers an inferior product and the current “dribble” about digital transformation, being touted by rivals. In his keynote address at the conference he noted the challenge business faced operating in “a time of incredible confusion, incredible noise.”

Pegasystems attracted 3,500 people to the event,  people who clearly want to cut through the confusion and noise in order to develop platforms to transform operations and compete with digital disruptors.

Founded in 1983 Pegasystems in Trefler’s own words “Took 24 years to become an overnight success. ”

He said that the company had done the wrong thing for many years, being entirely process oriented rather than outcome oriented.

A rethink has made the platform far more flexible, and has seen the company grow, this year to an $US800 million company.

That flexibility has also allowed the company to play a key role in organisations grappling with bimodal IT – acting as a form of middleware glue between legacy applications and customer or employee facing services, or emerging technologies such as Internet of Things deployments. It’s performing this role at organisations as diverse as Allianz, Philips, General Motors and – closer to home – the NSW Department of Transport.

The author attended Pegaworld as a guest of Pegasystems.