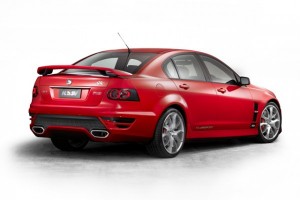 After identifying warehousing as an area for improvement, Holden Special Vehicles, in the interest of maintaining the greatest possible efficiency, went looking for a real-time solution that could seamlessly integrate with their existing software…

Lee Webster, chief information officer at HSV, says its customers demand the best, and any process advancement helps HSV to meet these expectations.

“Changes in demand and customer priorities are our key challenges,” Webster notes.

To stay ahead of the game, HSV continuously reviews its processes to look for possible inefficiencies in the manufacturing process. After identifying warehousing as an area for improvement, HSV enhanced performance with the introduction of a fully integrated, real-time wireless warehousing solution by Infor, Infor10 Barcode.

Webster explains: “We wanted an online, real-time solution that maximized our investment in our current system.

Infor10 ERP Enterprise directly processes the order without the need to translate it from another system and involve third-party software.”

Earlier, HSV had upgraded from Infor ERP Baan5c to ERP Enterprise to take advantage of its enhanced user interface for improved ease of use, as well as automated processes that resulted in significant efficiency improvements.

Before using Infor10 Barcode, HSV faced a number of challenges in dispatching and receiving goods, and in its system of identifying and counting stock.

“We used a manual paper-based process for dispatching goods,” says Webster. “Infor10 ERP Enterprise generated picking slips based on warehouse location, and we used these slips to help pick the goods. After picking, the user then returned to a workstation to process the order in the system.”

Similarly, the receiving of goods was a paper-based manual process, with goods being unloaded to a holding area, and then placed in their correct location. Workers would then send the received paperwork into the office to be processed.

“The problem with this process is that goods could sit in the holding area or on the shelf without visibility in the system,” says Webster. “Also, with stock counting, the user would write the actual quantity on a sheet before returning to the workstation to process the findings. Because stock lacked label identification, it could be easily confused with similar parts.”

“For example, the materials department might be chasing a delivery that had been sent to the holding area or was waiting for the paperwork to be processed in ERP Enterprise,” says Webster.

“Or, due to the similarity of some parts, an incorrect part might be sent to a customer. And in the dispatch area, there was far too much walking back and forth to the workstation to process paperwork on tasks that had already been completed. Plus, with handwritten dispatch labels and manually generated invoices, the process was simply too time-consuming.”

Although all these processes worked, they were inefficient.

“Paperwork could be lost or processed days later,” Webster adds.

Webster identified the need for a real-time, wireless, fully integrated warehousing solution allowing direct receiving of goods, including the printing of barcoded receipt labels. The system also needed to allow for direct picking and dispatching of sales, including invoice printing.

With cycle counts and stock adjustments, Webster wanted a system that allowed the counted stock quantity to be entered directly into the system. And, if required, this would automatically adjust the counted and adjusted stock in the system. “We wanted our warehouse users to quickly receive, dispatch, and invoice stock. With the paper system, there was a delay in getting the stock into the system. With Infor10 Barcode, the system showed updates immediately once the stock arrived.”

Webster says that using barcode scanners has had a major impact on HSV’s efficiency.

“The barcoding project has been well-received throughout our organization,” says Webster. “We now have barcode stock identification labels on all parts.

We can receive goods directly in the warehouse, and print a barcoded receipt label. We can look up and adjust stock levels at the actual location. We can ship and invoice sales directly from the barcode scanners.

From that, we can print a shipping label with the barcode for identification purposes.”

Webster says HSV has been able to increase the number of items dispatched using fewer resources.

“For dispatching goods, we recently had our biggest month ever, and we achieved it with one less person.”

Another useful feature of Infor Barcode is its portability.

Says Webster: “We use the Intermec CK3 Wireless Barcode Scanner and PB22 rugged wireless printers. The barcode scanners have holsters, and the printers have a belt clip so that the operator can wear it.”

The solution took about three months to implement. The IT department received training, and they, in turn, trained the warehouse end users.

Stock accuracy has also improved. “Users can scan an item and look up stock at the warehouse location,” says Webster. “Overall efficiency has increased. With less manual processing of paperwork, we can receive and ship more goods with fewer resources.”

In line with its goal of continuous improvement, Webster says HSV is planning to upgrade to FP7 and WebTop: “We are keen to test the advanced subcontracting, Microsoft SharePoint reporting solutions, landed costs, and purchase requisitions with Infor10 ION Workflow.”