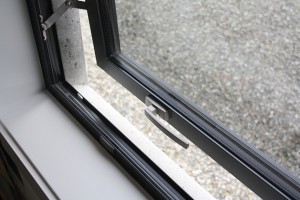 Aluminium window designer APL has delivered customers an open view of their orders, and they keep coming back for more…

Gaze out the window of a modern building and it’s more likely your eye will be caught by the view than the manufacturing details of the window frame.

Yet if it was designed by leading window system supplier APL, the possible variations in materials, colour and type of coating run to the hundreds if not thousands — enough to distract someone in the trade from the most scenic of vistas.

Small wonder, then, that Hamilton-based APL relies on a full-blown enterprise resource planning system to run its operations.

“With Syteline, our integrated ERP system, we’re most definitely ahead of the bunch,” says APL head of information and procurement Peter Dittmer.

The privately owned business designs and markets several brands of aluminium doors and windows that are produced by a nationwide network of more than 70 manufacturers.

The business, which was started in 1971, is vertically integrated. Aside from design and testing, it has an aluminium extrusion operation (INEX), an anodising business (FINEX) and a powder-coating plant (ColourWorks).

It also operates a fleet of trucks (APL Direct) that deliver materials to its diverse network of fabricators. SyteLine, from US company Infor, is at the heart of the business, says Dittmer.

“As orders come in — the majority through an EDI interface direct from our fabricators — they are put into the ERP system. The purchasing of any requirements to complete an order, and production scheduling, are then determined by the system according to lead time.”

If a fabricator requests a powder-coated product, its progress from receipt of the order to despatch by truck is automatically scheduled by the ERP system.

“If the goods are being powder-coated in silver pearl, say, we would normally give a five-day lead time. So the system will say this order needs to be picked on day three, painted on day four and on a truck on day five. SyteLine does all that for us.”

In doing so, Dittmer estimates the system is keeping track of thousands of product variables.

“You imagine you are getting a house built, all the different parts you could possibly have for all the windows and doors, all those are integrated through the system.”

APL’s use of SyteLine goes back about four years when a separate manufacturing division, ALPAC, piloted the system. Dittmer says ALPAC was chosen as the pilot site, because it was a relatively small operation, yet it stood to make significant gains from the ERP.

ALPAC did achieve the desired outcome with resource planning and response time benefits. It was therefore a logical step, 18 months later, to go live with a full implementation of the SyteLine system, at APL.

“That obviously had a cost associated with it, however we realised it would make it easier for the transitional phase, which it did. We even made the paper work used by the team picking products in the warehouse identical to what they were used to, to ensure consistency of documentation.

“I’ve been involved with other ERP projects where too much change was introduced at once, and they just fall over. Now we have this in place we will slowly use more bar-coding and other features to enhance the system as we move forward with it.

“But to suddenly, on day one, change everybody’s life is most likely going to lead to disaster.”

A significant added feature of the ERP system is that it has been integrated with APL’s trucking system, with an EMDA-developed application.

“The transportation system is one of the biggest advantages,” Dittmer says.

The system lets customer service staff work with truck drivers to amend load manifests ‘on the fly”, therefore being able to give the added bonus of allowing less urgent consignments to make way for express deliveries.

“In the past we couldn’t do that — once you’d run the manifest, that’s what you had to put on board the truck.”

The system also gives a clear view of what’s aboard each of the 11 trucks and trailers within the fleet.

Dittmer sums up SyteLine’s virtues in two words: ”flexibility and visibility”. The added value of SyteLine lets it adjust for contingencies and keep customers informed of their order status which in today’s competitive market is a boon.

“We have about 70 customers and they need to know where their goods are, whether there are any delays or problems with any part of the order as it goes through the system, and when the goods will be delivered. We’re able to feed back all that information through SyteLine into their systems so they can see their order status at any stage.”

Visibility also extends to oversight of APL’s key performance indicators. Dittmer says a business intelligence “bolt-on” to the system gives snapshots of details such as sales, gross profit and margins.

EMDA’s handling of the fortnight-long go-live process, during which the supplier’s project manager and APL’s IT manager, David Mens, put in 19-plus hour days, earns high praise from Dittmer. Ongoing support — including a trouble-free recent upgrade from SyteLine version 8.00 to 8.02 — is also solid.

“EMDA has some class people and overall it has been excellent. We have developed quite a close relationship and even have a soccer tournament with them.”

But not this year. Canterbury’s earthquakes, which forced Christchurch-based EMDA into temporary premises in February, mean there will be no 2011 fixture, so the trophy they compete for will remain where it is on Dittmer’s desk.

It’s a reminder, if he needs one, of the central part SyteLine plays in APL’s business.