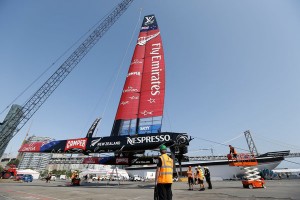 C-Tech, a key supplier of carbon fibre products for America’s Cup yachts, has navigated into new waters thanks to ERP system SyteLine and deployment expert EMDA…

When the 34th America’s Cup is sailed in San Francisco in September, Auckland company C-Tech will be as close to the action as it’s possible to be without actually being aboard either of the competing yachts.

As it has been for more than a decade, the 16-year-old company is a supplier of carbon fibre components to the America’s Cup teams. And C-Tech chief executive Alex Vallings, a sailor, will be competing in San Francisco Bay at the same time as the America’s Cup is being contested.

However, Vallings will be racing an 18-foot skiff with cloth sails while the America’s Cup is fought over by 72-foot catamarans with fixed-wings larger than the wing of a Boeing 747.

Vallings might well have mixed feelings as his boat skips across the waves, knowing that the big cats’ wings have diminished C-Tech’s role in the world’s richest regatta. A key component of a cloth sail, the batten, is absent from the rigid wings.

For most of a decade from 2001, more than three-quarters of C-Tech’s business came from supplying a unique, hollow, tapered rectangular sail batten. When the 31st America’s Cup was sailed in Auckland in 2003, the battens were used by Team New Zealand, Alinghi and Victory Challenge.

At the 2007 Cup in Valencia, says Lyn Holland, C-Tech’s administration manager and Vallings’ partner and fellow sailor, not one of the dozen participating teams was without the battens. “We supplied battens for every syndicate, so we were at our export peak with sail battens making up 80 percent of what we sold.”

The battens’ popularity was down to their strength, lightness and durability – the product of design and manufacturing nous that resided in Vallings’ head.

“Then someone decided to put solid wings on America’s Cup boats and completely ruined our market,” Holland says. “So things changed – and we changed our product mix at the same time.”

At about that time and with that kind of contingency in mind, C-Tech decided to upgrade its cashbook accounting system. The company was prospering – since Vallings started the business in 1997, revenue was approaching NZ$5 million, it had 17 staff and occupied an 1800sq m manufacturing facility in west Auckland.

Much of its success rested on Vallings’ engineering expertise and his ability to accurately cost the made-to-order jobs that came in via the company’s website.

“He built up all the manufacturing processes so could look at a job and know pretty well how long it should take and how much it would weigh so he could multiply that by the cost of carbon to get the material cost. He could pretty much do the labour and material costs in his head, or if it was particularly complex, on a piece of paper,” says Holland.

“Nobody else in the company had that capability or that information.”

However, if the company was ever to be sold, that institutional knowledge needed to be incorporated in its business systems. And there was another long-standing issue: with 80 percent of sales going overseas, currency conversions were time-consuming.

“We wanted to make our exporting process simpler. And we wanted to have a feel for actual costs – take them out of Alex’s head and put them into a bill of materials system. Our eventual objective is that someone will be able to come along and buy the company and its assets and one of them would not be Alex.”

Holland, who ran her own software development business before merging it with C-Tech in 2001, homed in on enterprise resource management (ERP) system Infor SyteLine, supplied by Christchurch-based EMDA. With its strengths in managing complex manufacturing processes and export businesses, it wasn’t long before SyteLine rewarded Holland’s judgment.

When America’s Cup defender Oracle Team USA set the design rules for the regatta being contested in September, far from having the wind taken out of its sails, C-Tech was able to rely on SyteLine to help it develop other product lines.

Battens have gone from being 80 percent of sales to 45 percent and the company has become a supplier of tubular composites for applications as diverse as telescopes, guitar necks and gun silencers. And it is keeping its America’s Cup hand in, making control components for the wings of the 2013 regatta’s yachts.

“Without the costing information we gained from having an ERP system we could have gone down some wrong tracks very easily,” says Holland. “We also have a much clearer picture of product cost versus sell price at a time whe people are taking a lot more care over what they buy. They’re not so willing to pay top dollar and we’ve had to be careful about our margins. SyteLine enabled us to change our product mix because we had visibility of costs.”

The ERP system has also eased the exporter’s exchange rate burden. C-Tech doesn’t engage in currency hedging, but with more than 350 suppliers and 1600 customers, most of them overseas, Holland appreciates SyteLine’s currency conversion functionality.

There was another objective, too, in choosing Infor’s ERP SyteLine, developed using the .Net toolset: C-Tech wanted a system that would interface with in-house software.

“We have a lot of spreadsheets and databases that record laminate information and product technical specifications and we looked for an ERP system that was going to be relatively easy to get things to talk to each other. The integration with Excel was one of the key reasons for choosing Syteline.” Integration remains a work in progress, Holland says.

In the meantime, despite “a much reduced role” in the 34th America’s Cup, Vallings and Holland are eagerly anticipating the event.

“We will be there and I’m looking forward to it,” Holland says.