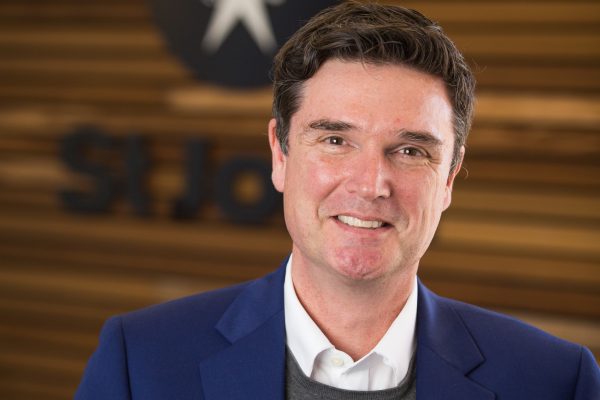 If you want to get a feel for what digital transformation is like, watch a few episodes of Grand Designs. The UK television show, which follows home owners as they build their dream home, has echoes of DX projects, says Pete Loveridge, St John director of customers and supporters.

“You start out with this great vision, you’ve got a budget, you think you’re going to do the build in six months, it’s all going to be easy. And what happens is it takes twice as long, the budget kind of blows out, you have weather intervening, you fire your architects and you go through three builders. But at the end of it you’re sitting on the sofa, having a glass of wine and celebrating what you’ve managed to do,” he says.

“If you’re going to do this go big … You can’t do it in the back cupboard and expect transformation to happen.”

The organisation, which provides ambulance services along with medical alarm services, first aid training, medical services at events and youth and community programmes, hasn’t quite got to the sofa and glass of wine yet, Loveridge admits.

“We are one of New Zealand’s most trusted brands, but behind the scenes we are incredibly complicated and do things in a very traditional way,” says Loveridge. “We have used digital transformation as a way to modernise the experience for our customers.”

When it comes to St John’s digital transformation, Loveridge, who is a speaker at the DX 2019 Summit in Auckland in March, says:

“Rather than just repainting an old house and shoving in some new windows and a ranch slider, we have dug really, really deep [to create new foundations].”

For St John, that meant building a completely new digital infrastructure layer, with a new stand-up of Salesforce, underpinned with APIs and a new software layer to rebuild the entire architecture.

“Anyone can do a new website. But I reckon half or three-quarters of them won’t have looked backwards to see how they can actually get better understandings and better processes for their customers.”

A key aspect has been standardising products.

“For one product we have five different ways of doing the same thing. I have a product that has 92 different letters for the same process, because they all have individualised signatures on them.

“So the first thing we needed to do was standardise how we run products, and then we can digitise it, because if we went straight to digitisation, we’d be trying to change five things and do all this.”

With the new architecture in place, Loveridge says St John’s focus is now on front facing work, something he says will make it easier to innovate.

“If you do a web site and you don’t fix the backend it’s very difficult for you to innovate because you are still trying to untie all the knots you’ve got behind you,” he says.

“It might take us a little longer and cost a little more but we’re going to have a platform from which we can innovate to the customer a lot more quickly,” he says.

Loveridge’s vision is that all St John clients – ambulance patients, supporters and customers – can see a complete record of every interaction they have with St John, from ambulance incident records to donations to information on mum or dad’s medical alarm and so forth, via the My St John portal.

He talks of a future where sensors in bathrooms can alert St John when elderly Telecare customers haven’t been to the bathroom overnight, enabling the service to check in and make sure the person is okay.

“It’s those sorts of things in the future that we will be able to do because of what we’re doing now.”

So, what are Loveridge’s key learnings from the process so far?

Engage your key stakeholders, including the CFO and c-suite.

Remember not all customers want digital, and they don’t necessarily want digital for everything. A case in point for St John: The organisation continues to use snail-mail direct marketing fundraising campaigns.

“If we took a fundraising DM campaign and flicked it into a digital DM campaign, the mail campaign would smash the digital campaign every time, because customers or supporters want to interact with you in a different way.”

That doesn’t, however, mean they won’t interact digitally – those supporters will often head online to donate.

You have to change the way you work. Loveridge says this has been one of the biggest challenges for St John as the organisation moves to a more agile way of business.

“I say every time a Gantt chart gets produced a fairy dies,” he says of the old, formulaic project schedules. Agile, however, is a term Loveridge doesn’t like, instead preferring to talk agility. Even then, he says, “There’s a fragility that comes with it because there are lots of people who potentially will be standing around wanting you to fail because they’re used to doing things a particular way.

“And it goes right up to the executive team to accept that you might not have a defined timeline, you’re wanting to build value quickly,” he says.

“That’s when the fragile bit comes in because you’re trying to handle expectations and old ways of doing things, allowing your teams to do the new way of working and then standing back and managing different people and expectations at the same time.”

“Your internal teams have to go through that change and you have to look after them because if they start going ‘well this system is a piece of rubbish and doesn’t do half of what we used to be able to do’ then you’re undermining the very value you’re trying to build.”

Selling the vision to them early on and making sure you listen to them throughout the process is crucial, Loveridge says.

“You’ve got to ask the whole organisation to get on the whole journey. You can’t do it in the back cupboard and expect transformation to happen.”