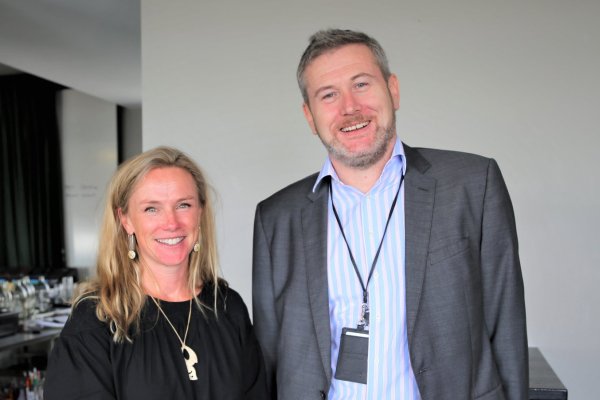 Would you let a machine design a major city’s centre, from planning the layout to placing the fountain and trees? Would you dump your ERP system and employ a load of people to do the job instead?

With those two questions, Leon O’Reilly neatly sums up his key push to A/NZ businesses around robotic process automation (RPA): It’s all about using robots – and humans – in the right places.

For O’Reilly, Fuji Xerox Asia Pacific general manager for digital platform, advanced industrial services, that means not using the technology where you need people, and keeping it simple.

“When I talk to customers about RPA the first things they want to do are highly valuable for their businesses, but incredibly complicated. Too complicated for RPA,” said O’Reilly (pictured with Trustpower’s Alice Thomson) presenting at a customer luncheon in Auckland last week.

“Robots can breed even worse than rabbits.”

“They’ve heard of the technology, they’ve heard the hype and they want to rush in and deploy an outcome. It doesn’t work. The first thing you have to do is look at what the humans are really good at. Let’s not try and replace that, lets emphasis that and amp it up and make it better. And on the flip side, what can machines do that are far more productive than what we do today?”

O’Reilly is refreshingly blunt that RPA isn’t a panacea for everything. It remains a technology best suited to automating highly manual, repeatable processes – the simple, but often time-consuming, copy and paste, screen scraping and transferring of data. Ask it to do complicated processes, deal with handwritten processes, or expect intelligence from it and you’re setting yourself up for failure. And if there’s another solution that works better, well, that’s the one to go for.

“If you’re wanting RPA for accounts payable, well, don’t,” O’Reilly says. “It doesn’t actually solve the problem and there are products, like Esker’s cloud based automation platform, that do everything you need to do in AP while a robot will only do a little bit of it. So you deploy an RPA platform for AP and everyone will go ‘is that it?’.

“RPA is not the answer for everything.

But O’Reilly and Cameron Mount, Fuji Xerox New Zealand GM of enterprise consulting, both agree there is huge potential for RPA across both Australia and New Zealand.

While financial services have been a front runner in RPA adoption across both markets, with healthcare a growing market in Australia and agriculture, including dairy and viticulture, offering high potential in New Zealand, Mount says there’s opportunity in every business, whether an SME or a large enterprise.

“There is pressure across the economy to be able to do more with the same, and that’s where RPA can help.”

Powering the workforce with robots
Kiwi energy and telco provider Trustpower is one company that has harnessed RPA successfully. Its journey started as a short term fix. Instead of employing ever increasing staff to work on telco provisioning – a complicated process involving multiple parties and systems to be interacted with, largely through copy and paste – a software robot was trained to collect the information in Trustpower’s system required by third parties to complete customer connections.

“We had known we needed to do a proper, full automation around a bunch of processes but that is much bigger exercise, a much more long term piece of work, which we are tackling and getting through now.

“But we still run a bunch of robots on top of those, or make decisions that we will fully automate this portion through different toolsets, and then use robots for another piece because it’s faster, easier and it’s working so why change something that’s not broken?”

RPA has since been deployed in other areas, including to scrape data about customers or future customers, clean it up and put into a format which can easily be read by Trustpower’s reporting tool.

“That process can easily take a person hours. Now they show up on Monday morning and the report is ready for them to look at. We’re not using the robot to analyse the information, it’s about putting the information in front of people, ready to be used.”

Trustpower now has six to 10 staff – out of the contact centre – building robots, with the company’s large developer team only providing occasional assistance and advice.

The ease with which the robots can be built and deployed (Thomson says if a robot takes more than a couple of hours to build, the process you’re trying to automate is probably too complex) does however, mean governance is crucial.

“People get excited and the robots can breed even worse than rabbits. The last thing you want is a lot of random robots running around your business doing things you don’t want them to be doing, or perhaps using up licenses but not working – perhaps because a third party portal has changed and we didn’t know.”

So where to start with RPA today?

“Anywhere you’ve got a complaint because of manual management of data – that’s where we start,” says O’Reilly.

Finance is a key area for RPA, given it’s the area most utilising spreadsheets and prone to copy and paste work.

“But anywhere you have processes that are highly repeatable, data that needs to be extracted from one system and put in another is a place to look.”

And, says O’Reilly don’t rush into the technology.