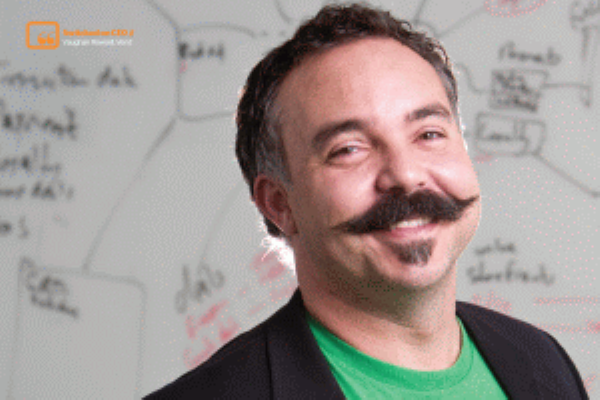 Vaughan Rowsell is most certainly man of the moment in innovation circles. The handlebar-moustachioed Rowsell has seemingly come out of nowhere with Vend, a cloud-based POS system that’s already netted thousands of users and the supreme award at the New Zealand Innovator awards.

Like all good ideas, the concept behind Vend is simple – take expensive, cumbersome and difficult POS software and replace it with a cloud-based point-of-sale system that can be accessed through a web browser on any computer device – tablets, smartphones, and existing POS hardware.

Seamlessly integrate it with other popular web business software and you’ve got a piece of SaaS solution that’s already attracted users in over 90 countries and could be at the centre of the burgeoning mobile payment revolution.

For self-described internet technologist Rowsell, it was as simple as looking for an industry that was being badly served by its software, and making it work better.

“Retail was a pretty obvious industry,” says Rowsell. “It hadn’t been innovated in the last twenty years and a lot of the software was either terminal-based or just really badly written Windows software.

“The engineer in me wondered whether or not you could move the frontline, in-store point of sale, totally to the cloud. Because for retailers it’s price prohibitive.

They have to make a $5 – 10k investment into getting their store up and running, just on the point of sale alone. We thought that was crazy. Software shouldn’t cost that much.”

Rowsell was stranger to neither software development nor start ups. The man behind Trade Me’s accommodation booking website, Travelbug (acquired by Fairfax Media in 2008), and owner of software development agency Voom Studio, had just returned from a stint in London, and couldn’t shake the idea that a cloud-based POS solution could be a potential winner.

Six months of work building the prototype followed. Once that was complete, Rowsell went looking for a willing angel investor to help get Vend to market.

That however, was easier said than done.

“Once I had the prototype really it was a matter of getting some financial backing, so I could quit my day job and focus all my energy full time on it.

“I wasted six months of my life I’ll never get back, just talking to these so called venture capitalists, trying to raise the money through professional circles, but it’s nearly impossible. Why? I don’t know. That’s a very good question.”

Despite polite interest from angel and institutional investors, none of Rowsell’s approaches for financing went anywhere.

In the end he reached out to former Trade Me associates Sam Morgan and Rowan Simpson, and without so much as a business plan, secured their backing.

Launched in mid-2010 as a one-man-operation, Vend has been making waves in the retail/POS sphere ever since, enjoying remarkable growth and taking away top honours at the New Zealand Innovators Awards. The judges not only praised Vend’s “spectacular” growth, but predicted that the SaaS POS system will do “great things globally”.

And so far, so good. With users in more than 90 countries, less than a year after it was launched, Vend is already processing more than $10 million in sales each month. Not bad for a company that hasn’t spent a cent on advertising.

“So even though we’re a Kiwi company we set our sights firmly on the global market. You do have to build extra functionality into the product to support multiple currencies, taxes and things, but mainly it’s a mindset thing.”

Now with a fresh $1 million cash injection from German tech investor Point Nine Capital, Vend is pushing aggressively into the US market with the opening of a marketing office in San Francisco’s tech-hub, South of Market, a stone’s throw from Silicon Valley (though Rowsell says the product team will be kept in New Zealand, with its “better access to great talent”).

“We’ve got users in 90 countries and that’s only within twelve months, but the US is a key market for us. From a product partnership point of view, there’s a lot of innovation around payments and loyalty that are all driven out of Silicon Valley, so we opened our sales office in San Francisco three months ago, and we’ll be growing our sales and marketing team from there.

The company is now focusing on getting the product in front of retailers – Vend is available via partner platforms such as Intuit – as well as more than a hundred on-the-ground resellers who can package Vend with other hardware and software services.

Targeted mainly at SMEs, the Vend POS system is the world’s first HTML5 retail POS. It runs on any browser device – PC, Mac iPad or Android tablet – and integrates with any other e-commerce software, accounting or inventory platform. It’s both an online and offline solution, so if a business’s internet goes down, their POS system will still run, and because it’s in the cloud, the software is highly scalable, allowing businesses to add instances to their system instantly for a small fee.

“Every retailer starting out has aspirations of a five store chain or whatever.

So as their business grows – and it might just be seasonal growth, maybe at Christmas – they can roll out additional registers, additional computers, and additional stores on Vend by adding an extra few dollars to their monthly fee.

Being cloud-based it makes it really easy for a retailer to grow their business.”

Rowsell says Vend’s cloud-based platform means that it can also address two obvious pain points for retailers: accounting and e-commerce, by integrating with other popular software platforms in the cloud.

“It’s about building that online eco-system,” he says. “The benefit of software-as-a-service, of cloud-based apps, is that you don’t have to reinvent the wheel over and over again.

That’s where the real benefit of cloud-technology is. All of a sudden you’ve got a platform that can integrate with lots of other online systems, like Xero for example. Vend automates all of the financials, plugs them into the retailer’s Xero account, and that saves [customers] hours a week.

The push of a button and all their sales and financial information flows seamlessly through their accounts.”

For Rowsell, it must surely feel like a case of ‘right time, right place’. Having an open platform on which to build positions Vend right in the middle of a burgeoning mobile payment/retail space.

“What we can see is that there’s a huge wave of innovation coming to retail because all the platforms are moving online,” says Rowsell. “Part of the reason we wanted to build Vend as an online platform was that we could sense the innovation happening in the financial sector, with the banks, but the existing equipment was not positioned well to deal with it.”

With the increasing focus on mobile payments and with major players now starting to roll out real world solutions, Vend’s horizons are already expanding to include integration with developing mobile payment options.

“All the major players are focusing on the mobile phone as the device to replace the credit card and to replace the loyalty card, and that makes sense,” says Rowsell.

“How it manifests itself though, nobody’s really sure yet, let alone the consumer, but there’s a clear need there and everybody likes the idea of using their phone for paying. But it needs to be made super easy and super convenient for both the retailer and the consumer.

“The next big thing is the fusion of the mobile wallet – that covers everything from paying for stuff, to customer loyalty, couponing. Bringing back that golden age of retailing back into modern-day retail, where the retailer knows you and understands your preferences and your history with them and rewards you for that. Making that all seamless and all transparent – that’s where everybody’s focusing.

“And that’s an opportunity for us, but we’ll stand on the solders of giants, so you’ll see us announce quite a few new product partnerships over the next few months.

“We picked our timing right. We’re sitting right in the middle of it.”