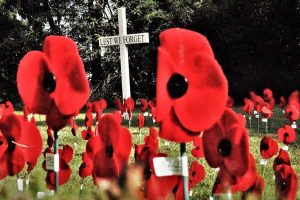 Virtual poppies, online donations and driveways at dawn, lest we forget…

We may not be able to stand side by side at Dawn and Civic Services this year, but New Zealanders and Australians are still being called on to commemorate servicemen and women, past and present, this Anzac Day, with a blending of the virtual and real worlds.

With Covid-19 making social distancing a continuing focus on both sides of the Tasman, services have been cancelled for the first time in history and the Poppy Day Appeal, the annual RSA fundraiser, has been postponed. The appeal usually raises more than $1.5 million to support veterans and their families.

They too bear the qualities of Anzac – courage, ingenuity, humour, endurance and mateship – within themselves.

Instead of standing shoulder to shoulder in silence at dawn, or watching the diminishing ranks of veterans make the slow march to cenotaph’s around Australia and New Zealand, and listening to the haunting strains of the Last Post, virtual services and online events – including the laying of virtual poppies – will be the order of the day.

The red poppy, made famous by Lieutenant Colonel John McCrae in his poem, In Flanders Fields, has been a symbol of remembrance for the lives lost on the battlefield.

Laying a poppy on cenotaphs across Australia and New Zealand has become a feature of Anzac Day, and Auckland Museum is continuing the tradition this year with virtual poppies able to be laid at Auckland Museum’s online centotaph, where messages can also be left for those who have served, and you can read stories about returned servicemen and women.

The Department of Veterans Affairs has poppy making instructions, for those who want to get creative along with some great learning activities for the little ones and the New Zealand Defence Force is also providing a ‘create your own poppy’ option, along with a Stand at Dawn colouring page and Wordfind. Stuff has a window poppy which can be printed and hung in windows and The Daily Telegraph is offering a printable poppy.

Official dawn services will be broadcast on Radio NZ National in New Zealand.

Earlier this morning, the campaign had raised more than NZ$148,000.

Commemorations won’t all be virtual, however. In both New Zealand and Australia, we’re being urged to get outside at 6am to stand and observe one minute’s silence in Driveways at Dawn/Stand at Dawn (NZ) and Light up the Dawn (Australia). The RSL has asked Australians to take a candle, torch or phone with them to light up the dawn.

The NSW State Library is urging people to post images of the commemorations and post them on social media using #NSWathome and #Anzacathome.

In words that could apply equally to Kiwis, RSL Victoria State president Robert Webster says: “As Australian’s face continued uncertainty due to Covid-19, the RSL want to remind every Australian that they too bear the qualities of Anzac – courage, ingenuity, humour, endurance and mateship – within themselves.

“We may be physically isolated, but the Anzac Spirit unites us. Lest we forget.”