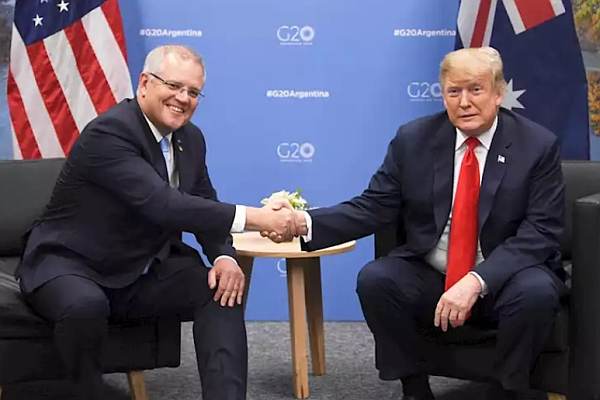 Powerful global forum need only focus on changing one word…

It’s a start, and it does send a signal, but world powers need to align around similar changes, in particular the US where it could be as simple as changing a single word from ‘don’t’ to ‘do’.

The legislation passed as all sides of the house in Canberra seek to make sure social media companies do not become platforms for promoting such atrocities as the March 15 Christchurch mosque attacks.

Motivating lawmakers has been Facebook’s defensive stance to date, restating ad nauseum how it successfully removed or blocked 80 percent of the uploads, but avoiding the fact that decade-old technology was the reason the video was for all intents publicly available.

“Mainstream media that broadcast such material would be putting their licence at risk, and there is no reason why social media platforms should be treated any differently.”

Australian Prime Minister Scott Morrison weighed in saying “Big social media companies have a responsibility to take every possible action to ensure their technology products are not exploited by murderous terrorists.”

He says Australia will encourage other G20 nations to hold social media companies to account, and has added the topic to the upcoming G20 summit in Osaka, Japan at the end of June.

While the looming Federal election may not see Scott Morrison at the table, he would do well to put forward New Zealand Prime Minister Jacinda Ardern as an invited speaker.

Under the new laws, it would be a criminal offence for platforms not to quickly remove hate related posts such as terror attacks, and other acts of violence. Social media executives could face up to three years in prison for failing to remove offensive content while their platforms would also face fines of up to 10 percent of their annual turnover.

While some have called the proposed laws kneejerk and draconian, Australian Attorney-General Christian Porter says social media needs to be held to account along similar lines to broadcasters.

“Mainstream media that broadcast such material would be putting their licence at risk, and there is no reason why social media platforms should be treated any differently,” he says.

The government held meetings with the big tech players after the attacks, and was reportedly underwhelmed by Facebook’s response.

“They are the publisher, not just the postman. It cannot be a case of all profit, no responsibility,” she says.

In the face of the global brouhaha, Facebook’s CEO, Mark Zuckerberg finally responded to criticisms. In a letter published in the Washington Post he said “I believe we need a more active role for governments and regulators. By updating the rules for the internet, we can preserve what’s best about it – the freedom for people to express themselves and for entrepreneurs to build new things – while also protecting society from broader harms.”

With Facebook now seeking better engagement with lawmakers to combat this issue, the G20 Summit must take up the opportunity to express their resolve to seriously address what is undoubtedly a global problem.

They must seize upon Zuckerberg’s acknowledgment that his company has some responsibility, saying “Lawmakers often tell me we have too much power over speech, and frankly I agree.

I’ve come to believe that we shouldn’t make so many important decisions about speech on our own. So we’re creating an independent body so people can appeal our decisions.”

While Zuckerberg’s sentiments sound positive, there is a risk that Facebook takes control of the narrative away from governments and regulatory bodies around the world who should be very wary of similar platitudes.

Morrison’s tough stance on social media regulation sends a strong message that might sit well with Australian voters, but the practicalities of the proposed legislation need to get publicly and widely debated so its probable shortcomings can lead to better regulation across all jurisdictions.

The G20 has an opportunity to send a co-ordinated message that regulatory settings around the world will be established. It is only when these are in place that social media companies will be properly motivated to take their social responsibilities more seriously, as Zuckerberg to his credit has come to recognise.

US lawmakers should rightfully be the centre of the G20’s attention. US laws currently enshrine online social platforms with immunity from the usual rules of decency that publishers must adhere to.

In particular, Section 230 of the Communications Decency Act in the US says platform companies don’t have responsibility over the content users post.

The time has come, G20, to send a message to President Trump – please remove the n’t.