News > Can tech really put out a fire?

Can tech really put out a fire? 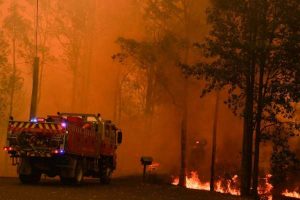 Firefighting has traditionally been relatively low tech and reactive – dousing fires with water and foam from both the ground and above, and using techniques such as backburning to try and stop it spreading. But as bushfires become more frequent, and more intense, and technologies such as AI, drones and IoT become more mainstream and less costly, there’s a new arsenal of weaponry opening up in the battle against bushfires.

Predicting spread is only one part of the equation.

Last year’s fire season – the worst in history for New South Wales – claimed the lives of 25 people, with 13.6 million acres – six percent of the entire state – destroyed. Across Australia, the 2019-2020 fire season caused up to $100 billion in damages.

Across the ditch, New Zealand’s fire seasons pale in comparison, but wild fires still burn through around 6,000 hectares each year, costing around $100 million just in damage to infrastructure and public property. That’s a figure that doesn’t factor in the cost of damage to rural and conservation land and private property.

The results of the sprints, which saw four data quest teams focused on three challenges – improved fuel assessment, early detection, and ML fire behaviour models – will be showcased in an online event later this month.

It comes as the The Final Report of the NSW Bushfire Inquiry, released late last month, notes a need to ‘push available technologies harder, especially fire science, remote sensing, data science and AI to equip us better to understand what happens during a bush fire and respond more quickly’.

“While noting that the 2019-20 fires were unlike anything seen in NSW before, the Inquiry also notes that modern day technology and research advances have made us more capable of responding to them than at any time before.

“But we need to push our technological and our research capabilities much harder so that we can make massive improvements in fire and fire risk interpretation and response.”

The report notes that remote sensing technology has been used before and during the fires, but not as extensively as it could have been and calls for a spatial technology acceleration program for NSW and Australia.

“It is now timely for NSW, which has a long history in this field, to establish a spatial technology acceleration program.”

The program would maximise the information available from remote sensing technologies already in use and new sensing systems to improve capability to detect ignitions and monitor accurately intensity and progression.

The independent inquiry made 76 recommendations, all of which have been accepted in principle, and calls for NSW to harness its significant research and technology strengths to become a world leader of bush fire research, including technology development and commercialisation, with a particular focus on extreme bush fire behaviour.

The country has already become something of a test bed for fire prediction technologies. An Australian program, Phoenix RapidFire, models forest and grass fires, analysing them and making projections for their likely spread, taking into account the issue of ‘spotting’ – the creation of new fires downwind. A similar programme, FarSite, is in use in the United States, where fires are currently cutting a swathe through California.

But predicting spread is only one part of the equation and there’s plenty of effort going into technology to predict where fires might actually start.

A 2019 report from the Blue Sky Thinktank noted the potential for swarms of drones, equipped with visual, thermal and infrared sensors, LiDAR and assorted other technologies, to scan environments for anomalies and heat signatures of plants to identify at risk areas.

Technologies including IoT sensors are being also tapped for the data used for prevention planning.

Griffith University’s David Tuffley, a senior lecturer in applied ethics and cybersecurity, has also suggested the use of mesh networks, once 5G is rolled out, to enable people in a bushfire affected area to create a local mesh network, using their phones. They could then record 360 degree videos, take photos and record reports. Photogrammetric AI can then be used to produce reliable information about the environments, using the captured imagery to create live holograms.

“This form of virtual reality will put observers right there on the ground,” Tuffley says.