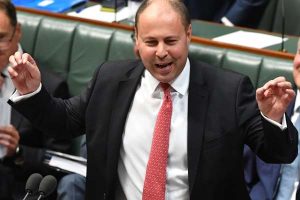 The failure of platform companies to come to the party on plans for a voluntary code of conduct in Australia means they’ll now face a mandatory code of practice requiring them to pay local media for reusing content.

Australia’s Federal Government has asked the ACCC to develop the new mandatory code of conduct to ‘help level the playing field’ and ensure appropriate compensation for original news content.

Treasurer Josh Frydenberg (pictured) says the code will include a number of provisions, including those related to value exchange and revenue sharing; transparency of ranking algorithms; access to user data; presentation of news content and the penalties and sanctions for non-compliance.

“We won’t bow to their threats.”

The moves come just days after France’s competition authority, the Autorite de la Concurrence, ruled that Google must pay French publishing companies and news agencies for using snippets of their content in its search results and in its news aggregation service.

Media companies have been struggling in recent years, as digital platforms take increasing chunks of advertising revenue and the Covid crisis has further exacerbated the situation.

At a New Zealand Epidemic Response Committee hearing last week the committee heard from independent witness Gavin Ellis – former editor of the New Zealand Herald – that social media companies, particularly Google and Facebook, are siphoning off at least 70 percent of the NZ$1.26 billion spent on digital advertising each year.

Google meanwhile says it has sought to work constructively with industry, the ACCC and Government to develop a code of conduct and will continue to do so in the revised process.

The ACCC was tasked with developing a voluntary code of conduct for the relationships between the digital platforms and media companies, however, Treasurer Josh Frydenberg says ‘insufficient progress with the parties has been made’, leading to the decision to move to a mandatory code.

“On the fundamental issue of payment for content, which the code was seeking to resolve, there was no meaningful progress and, in the words of the ACCC, ‘no expectation of any even being made’,” Frydenberg said in an opinion piece in The Australian.

“It is in this context that the government has taken the decision to move from a voluntary to a mandatory code, the preparation of which will be led by the ACCC.”

Communications Minister Paul Fletcher says Australia will rely on competition law, rather than following the European lead of relying on copyright law. The EU’s Copyright Directive, adopted last year includes a ‘publishers’ right’ to protect content against unauthorised uses by online platforms and ensure payment for content by services such as news aggregators.

The move resulted in Google removing the previews of news articles from European publishers in its French search results.

Recent years have seen a litany of attempts to force the platform companies to pay up for content, and Frydenberg admits Australia faces a ‘big mountain to climb’.

“We won’t bow to their threats,” he says.

Spain passed a law in 2014 requiring news aggregators to pay for a license to use content. Google’s reaction? It shut down the Google News service in Spain. While some critics of EU attempts to adopt similar rules have claimed the closure was ‘disastrous’ for Spanish news publishers, News Media Alliance says its reviews of data indicate publishers wouldn’t be significantly harmed by Google ceasing Google News operations in specific countries.

“The data we reviewed indicates that the closure of Google News in Spain in 2014, and the underlying Spanish law, were not detrimental to the Spanish news publishing industry as a whole. In fact, they indicate that those Spanish news publishers included in the analysis were minimally affected and that the reduction in traffic following the closing of Google News was, if anything, low and temporary.”

Early last year New Zealand has floated the idea of a digital services tax of two or three percent of the local revenue from companies such as Facebook and Google, along with gig economy companies such as Uber and Airbnb. However, those plans appear to be stalled. It has been suggested that some of that funding could then be funnelled towards ‘public interest journalism’.