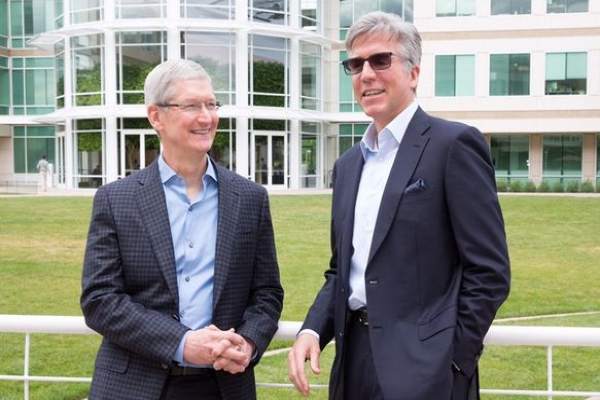 In a new joint effort, two heavy hitters from opposite ends of the ‘consumer-enterprise’ spectrum have announced that native ERP apps for iOS are in the pipeline. SAP is recognised as probably the world’s top ERP solution provider, while Apple is surely the undisputed champion of the mobile devices arena.

In a statement, Apple’s Tim Cook and SAP’s Bill McDermott said they will jointly deliver a new SAP HANA Cloud Platform SDK that will provide the tools to build iOS apps for iPhone and iPad. SAP HANA Cloud Platform is the company’s platform-as-a-service. The apps will provide access to core data and business processes on SAP S/4HANA (SAP’s most-recent ERP software), while using iPhone and iPad features like Touch ID, Location Services and Notifications.

iStart scratched its collective head a little on hearing the news, as SAP has offered its Mobile App Development Platform (MADP) since at least 2012 – which allows the development of mobile apps for all the major mobile operating systems – and has offered its Fiori platform for porting applications to mobile devices using HTML5 since 2013.

Could it be the ‘native’ which is the exciting bit? Not necessarily, Nick Mulcahy, CEO of Soltius told us, explaining that there are already plenty of native mobile apps in the app store and on the SAP MADP platform. So what’s the difference?

“The major thing is probably that it’s on the HANA platform. That has been a complex infrastructure for developers to date, and expensive, so this seems to indicate [that developing on HANA] will be more embedded and more connected than previously, with web services exposed.”

Agreeing that figuring out precisely what’s what in the SAP world isn’t easy (“SAP does have over 3,000 products and many of them do the same things, so now it’s looking at refining them”), Mulcahy provided the necessary insight on Fiori, too. “Fiori is literally touted as the new standard user interface for the whole of SAP ERP, and across cloud solutions. It is to replace the classic GUI, and being HTML5, you can put it on any user device.”

Be that as it may, the Apple/SAP announcement is so momentous a development that none other than the CEOs of the respective companies are quoted in the joint statement. Tim Cook said the partnership will transform how iPhone and iPad are used in the enterprise, “by bringing together the innovation and security of iOS with SAP’s deep expertise in business software”.

Cook pointed out that 76 percent of business transactions touch an SAP system, which therefore meant “SAP is the ideal partner to help transform how businesses around the world are run on iPhone and iPad”.

He also noted that SAP has an army of more than 2.5 million developers – an army which was now equipped with a new weapon in the SDK, “to build native apps that leverage SAP HANA Cloud Platform”.

For SAP’s part, CEO Bill McDermott said: “By combining the capabilities of SAP HANA Cloud Platform and SAP S/4HANA with iOS, we will help deliver live data to people wherever and whenever they choose to work.”

The statements of both CEOs contained numerous self- and mutually-congratulatory adjectives (which iStart has edited out), pointing to a budding bromance if not between the men, then certainly their respective companies. That shouldn’t come as too much of a surprise, said Mulcahy, as Apple is looking to grow its presence in the enterprise sector (slowing iPhone sales confirm it has all but reached the limits of its growth potential in consumer markets), while SAP is looking to become more user-friendly.

Also in the pipeline is a new ‘SAP Fiori for iOS’ design language, which the companies said will combine with a consumer-grade iOS experience to deliver on user needs in the enterprise. A new SAP Academy for iOS will offer tools and training.

Surprised by the announcement, Mulcahy said he did wonder what this meant for the future of the SAP MADP platform – which, he noted, can solve the reality of the multiple mobile platforms which can typically be found in any given enterprise.

And while Mulcahy added that the announcement is advancing the case for a ‘consumer grade’ interface, he noted the ability for the new SAP/Apple to look like Fiori. “That’s hedging bets, so while the consumer interface will be useful for external facing applications, customers can use the Fiori interface to deploy to internal people.”

As for the impact of the announcement, he doesn’t expect anything to change substantially, noting that where mobility is required by customers, tools and techniques are already available to meet demand. “However, in due course, what could happen is that SAP developers could start producing apps that customers find useful and can access from an app store, rather than having their partner produce custom solutions. That could be a longer term benefit.”