Billion dollar promises and a tech sector welcome for Labor 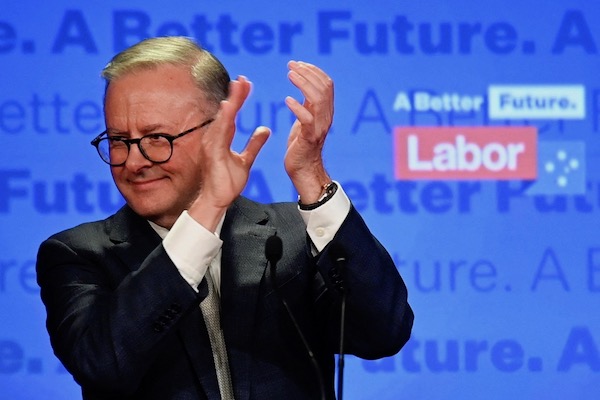 All the Australian Labor tech promises…

Labor’s federal election win has been widely welcomed by the Australian technology sector, amid billion dollar promises of funding for advanced technologies and more training.

With seven seats still to call earlier today, Labor looks likely to be able to form a slim majority government and turn its election promises into reality.

“Our success means that 2.2 percent of the world’s tech unicorns have come from Australia.”

In the lead up to the election, Labor made some big funding promises for the sector, pledging AU$1 billion for innovative Australian technologies in areas deemed critical to the future of the country and economy. Those areas include AI, quantum computing, robotics and software development.

Labor says it will partner with businesses to unlock further potential private investment of $30 billion for the fund.

“This investment will play to our strengths supporting new and emerging industries, transitioning existing industries to net zero emissions and by making it easier to commercialise innovation and technology.”

The campaign also saw Labor leader Anthony Albanese, who was sworn in as Prime Minister yesterday before flying to Japan for the Quad Summit, promising to grow the number of tech workers to 1.2 million by 2030, with plans for 450,000 fee-free TAFE places and an extra 20,000 university placements.

That goal was criticised by the Australian Computer Society for not being ambitious enough, with ACS president Nick Tate noting that current growth rates would see Australia needing around 1.3 million tech workers by 2030.

Despite that, the professional association for Australia’s tech sector says it looks forward to working with the new government to develop programs that encourage young Australians to study IT related fields, workers to retrain in digital skills and businesses to invest in emerging technologies.

“Labor’s plans to build Australia’s advanced manufacturing sector will require a strong national investment in digital skills as well as incentives for business to invest in emerging technologies, and we look forward to working with the government in achieving this,” Tate says.

The Tech Council of Australia (TCA), which comprises a wide range of tech companies including Atlassian, Airtree, Canva, Microsoft, Redbubble, Google, Blackbird and Stripe, says the promise to expand the tech workforce sends a clear signal to Australians that employers will sign-up to create the jobs, and provide a shared commitment to help Australians work in technology, including through reskilling and training opportunities.

Kate Pounder, TCA CEO, was also optimistic about the Critical Technologies Fund, saying it will enable the tech sector to capitalise on a ‘once in a generation opportunity’ to make Australia a global tech powerhouse and deliver billions in economic activity while providing secure, flexible, well-paid jobs and making Australia ‘the best place to start and grow a business’.

“Over the last decade, Australia has shown it can create globally successful tech companies from locations ranging from Sydney to the Sunshine Coast,” Pounder says.

“Our success means that 2.2 percent of the world’s tech unicorns have come from Australia, even though our share of global GDP is just 1.6 per cent. It shows we can punch above our weight in the global tech race. Critically, it also shows Australia has gained an important, new industrial strength in our economy: software development,” she says.

“Now we need to do the same for the next generation of strategic tech industries. That is why we are especially pleased to note the fund will target key areas including quantum computing, artificial intelligence, robotics and software development.”

McKinsey research suggests Australia already attracts 3.6 percent of global funding for quantum, but Pounder says despite that there is a genuine funding gap for next-generation strategic industries and the fund will help complement existing private funding.

The Australian Information Industry Association (AIIA) response was a little more muted. While congratulating Albanese and the Labor party for their win, and saying recent funding commitments ‘are extremely pleasing’ AIIA CEO Ron Gauci noted “We have seen in recent years funding being committed but held up by bureaucracy, causing significant delays in the funding reaching industry.

“Our commercialisation of Australian IP needs greater support to continue to deliver growth and jobs in Australia, ensuring our IP is not sold overseas.”

He took the opportunity to urge Labor to appoint a cabinet level Government Services and Digital Economy Minister, responsible for ensuring Australia is a leading digital government by 2025, and subsequently a leading digital economy by 2030.

“The AIIA has identified there is now a need to better align and coordinate the various digital economy initiatives under one Minister and one portfolio,” the AIIA says. It says the previous Digital Economy Minister has been coordinating policy and arguing for important budget initiatives, but there’s opportunity to have a minister with a singular focus and broaden the scope of digital accountabilities within that portfolio.

“The growth of Australia’s digital and innovation economy demands a dedicated minister as it is now Australia’s third largest economic sector,” Gauci says.

He says the sector could ‘easily’ employ 1.5 million Australians in the next few years if the skills shortage is addressed, but red tape is restricting the sector which needs better targets and coordination.

Labor’s promises contrast starkly with New Zealand’s Budget last week, which saw $20 million allocated to grow the New Zealand SaaS community and take New Zealand’s NZ Tech Story marketing initiative ‘to the world’. Other funding was allocated for health IT systems with the healt sector undergoing major reforms and $30 million for the Computer Emergency Response Team for cyber resilience support, but, a year out from the country’s next general election, there appeared little interest in stoking up the Kiwi technology sector, which currently contributes more than eight percent to GDP with a 2.7 percent increase to GDP for every four percent increase in tech growth productivity, or encouraging digital.