News > Bottoms up to emerging raft of technologies

Bottoms up to emerging raft of technologies 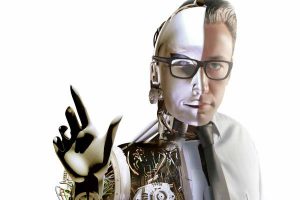 Imagine swiping your left buttock across a terminal to complete a payment; banking giant ANZ has – and it’s just the start of a massive change in the way humans and technology interact…

In a series of exceptionally good television advertisements ANZ has telegraphed the fact that it is the first major bank to offer ApplePay in Australia through its smartphone app. The buttock swiping incident features in one of the adverts where a young woman pays for coffee by swiping her jeans pocket (containing her smartphone) across a tap and go terminal.

Australians have been among the world’s most enthusiastic adopters of tap and go, or contactless payments, since the facility was introduced. As more smartphone contactless payment options emerge it’s likely that the digital wallet will start to takeover from the plastic credit card.

But a further wave of far more profound change is looming according to software company MYOB which has today published The Augmented Human, a report exploring how consumers will embed more and more technology in their lives. For enterprise Australia it’s an early heads-up on what they may have to contend with in the future, and the sorts of solutions that consumers may eventually demand.

MYOB Chief Technology Officer Simon Raik-Allen believes that there will in the future be greater deployment of technology to augment an ordinary human’s capabilities, leveraging technologies such as artificial intelligence and embeddable systems.

“It’s going to be massive for business – giving rise to a whole range of new industries that we’re only just starting to imagine the possibilities for,” according to Raik-Allen.

The report suggests that it will take only a little more research before today’s wearable devices are joined by embedded devices.

In terms of a use case the report notes; “Imagine for example an augmented shopkeeper. They are working in the back office when a customer enters their store. There’s no bell on the door – rather they “feel” the presence of the customer through a small nerve activated on the back of their neck or hand. As the customer walks around the shop they are made aware of their movements through a map of nerves that lightly fire as they shift position.

“A blink of the eye brings up the lined store cameras in a retina display showing what the customer us looking at as the storeowner gets up to go and greet them.”

The scenario completes with the storekeeper receiving ERP information about stock direct to a retina display, a purchase being selected, paid for with a hand (embedded with an account chip) swipe and the product delivered by drone.

Who knows what tomorrow’s buttocks may achieve?