Chorus packs down under WFH onslaught 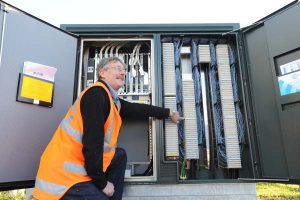 New Zealand’s favourite game has played a role in keeping Chorus’ network up and running as traffic hits all-time highs this week, with the great Kiwi work – and school – from home getting underway.

Steve Pettigrew, Chorus head of external communications, says the network usage reached a record high of 2.8Tbps on Thursday evening, as Kiwis were urged to stay home and restaurants, bars, movies and other entertainment closed.

The previous high on the network had been 2.6Tbps, recorded during the Rugby World Cup 2019.

Chorus has everything protected in its supply chain in preparation for further increases.

Daytime network traffic soared to 1.99Tbps on Thursday – 99 percent higher than the 1Tbps baseline level recorded last Tuesday – as Kiwis worked from home, and with school out for Kiwi kids.

Telcos have this week been facing mobile network pressures, with Vodafone yesterday acknowledging outages on both its fixed and mobile broadband networks and Spark suffering issues earlier in the week which saw voice calls dropping.

Asked about the network’s capacity, Pettigrew says the question of limits is ‘harder to answer than you might think’ and varies across the network, but in general is an area between 3.5Tbps and 4Tbps.

“One of the things that has been a real benefit for New Zealand – for Chorus in particular and for NZ more widely – was the RWC because the industry came together and worked together to ensure all our networks were ready for what could be an immense burden in terms of online live video being watched across the network,” Pettigrew says.

“That was a turning point and an enormous benefit to New Zealand in terms of network preparedness for this event.”

Spikes on the network aren’t unusual. Apple releases cause a brief increase in traffic as do gaming updates, among other things – Pettigrew says a key concern with Rugby World Cup was the potential for a large gaming provider to release an update and put the network under pressure.

“We actually had a jitter last week where we thought work from home was having a massive spike on our network, but it turned out Call of Duty were doing a game update!”

In Europe, operators have seen increases of around 70 percent when lockdowns went into force in their countries.

Pettigrew says he’s expecting the figures to start balancing out and says ‘we’re still well within headroom of what we can do on our network’.

He says the company ‘has everything protected in its supply chain’ in preparation for further capacity increases. The company traditionally starts prepping for additional capacity when the 60 percent threshold is hit.

Retailers, meanwhile, have been dropping data caps to provide more capacity for those now working from home during the Covid-19 lockdown.

Unlike in Australia where NBN Co charges retailers for capacity, Chorus doesn’t impose data caps, simply selling a line to the retailer who can then model that service how they want it, including adding caps to create differentiation. Pettigrew says Chorus has bene of the view that data caps are dated. Customers seem to agree and are voting with their feet – 70 percent of new connections on the Chorus network are unlimited plans.

The 1Gbps question
There has been some discussion among fibre providers – who also include Enable, Ultrafast Fibre and NorthPower – about moving all fibre to 1Gb automatically during a pandemic to ensure everyone has the fastest possible speed. For the fibre providers, it could be a good way to demonstrate the difference between mobile networks and fixed networks, with their greater capacity.

However, Pettigrew says that has implications right up through the chain, and could create bottlenecks.

“The handover points around the network – where we take traffic from retailers and they hand traffic over to us – is capacity bought by the retailers and carefully shaped so it caters for their customers because they don’t want to pay for something they don’t use.

“If you don’t want that to become a bottleneck, you have to make sure it has the capacity to deal with the increased load coming through.”

That’s something that would require new electronics and backhaul along with other potential costs within the retailer network, such as international capacity for content pulled in from overseas.

Plug it in
If you can, use an ethernet cable to plug your laptop into the router because it will always provide a more robust connection than being on wifi and will enable you to get the best from your broadband connection. Plugging it in also frees up your wifi for others in the house to use.

“Whatever you can plug in, plug straight into your router. Particularly if you have a smart TV. It frees up your wifi for a lot of capacity. Then you can let wifi be focused on your devices,” Pettigrew says.

Dump that office VPN and make use of your home broadband
And office VPN might provide great security, but there are capacity constraints and higher bandwidth activities such as a videoconference can put a burden on the link to the office. Instead, if you’re using something like videoconferencing, open another browser window using your regular home broadband for hosting the call, or use your iPad or smartphone.

This is one that the iStart team can attest too, following a shockingly poor-quality Zoom call this week. The culprit: Two of those on the call were running their videoconferencing through their company’s VDI. While the cloud-based service enables their desktop to go with them wherever they go, the VPN also has limits and choked the videoconference.

Make sure you’re harnessing the latest.

Most routers offr two Wifi networks – the older 2.4GHz standard and the newer 5Ghz standard. When you install your router and set your wifi up, make sure you select the 5/5GHZ option.

“Connect newer devices to the 5GHz network, older to the 2.4GHz network and you’ll see an immediate improvement in your performance.”

Find a guru
“Everyone knows one so find your family member or friend who is an internet guru and ask them for help. This is a time when people really are willing to help. Get them to give you some advice on how to optimise your specific network.”