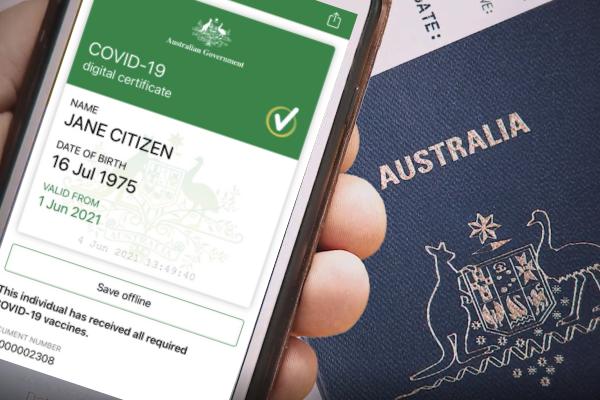 The proof is in the certificate…

Australia has begun rolling out digital certificates to prove Covid-19 vaccination status – seen by many as a vital step out of the pandemic.

The certificates, accessible through MyGov and Medicare accounts including the Express Plus Medicare app, enable anyone who has received both doses of the Pfizer or AstraZeneca vaccines to view – and show – their certificate, which includes their name, date of birth and a green tick.

“We’re giving people control over the level of vaccination history they share.”

“We’re also giving people control over the level of vaccination history they share, as the certificate only shows your Covid-19 vaccination status,” Reynolds says.

The EU, governments and airlines – including airline body IATA – are rolling out vaccination certificates and vaccination passports, with proof of immunisation being seen by many as a vital step towards relaxing restrictions and kickstarting travel.

With Covid vaccination the new entry requirement for many destinations, some of the offerings allow travellers to use an app to show proof they’ve been vaccinated, potentially avoiding further tests and onerous quarantines.

In the EU, the Digital Covid Certificate, which includes a vaccination certificate as well as recovery and test certificates, is due to come into force on July 01, with a number of countries already issuing the certificates. It uses a QR code containing the data.

Non-EU member states, including Iceland, Norway and Switzerland will also use the ‘Green Certificate’, though the UK will not – it’s developing its own digital certificate and doesn’t yet have a deal with the EU for mutual recognition.

Israel too, has a ‘green passport’. Vaccine passports are in play in some areas of the US, while in India, the CoWin vaccination certificates is being linked to passports and in Japan a certificate – initially paper-based – will roll out soon, followed by a smartphone solution based on the EU Digital Covid Certificate.

But it’s an area fraught with fraud. In Germany’s Cologne a special police team has been set up, dedicated to combating the growing issue of forged vaccine certificates. While fake certificates are being offered, many are also being duped by fake offers, parting with cold cash – often in the form of cryptocurrency – and receiving nothing.

The abundance of individual offerings, from both governments and airlines, and lack of a single central system to verify vaccination status is adding confusion to the situation – and another digital layer to an already extensive lineup of Covid apps, including tracing apps rolled out by many governments.

Qantas for example, has been trialling the IATA pass, along with the CommonPass, a similar app from the Commons Project.

Concerns have also been flagged over privacy, discrimination against those who can’t be vaccinated and those who will be vaccinated last, and whether the passports could be used not just for international travel but for local use, restricting services to those who don’t have proof of vaccination.

While the vaccination passports might be a polarising topic a recent Ipsos survey found 86 percent of Australians surveyed supported vaccine passports for international travel – putting the country among the most keen for the passports. Malaysia and Peru topped the poll at 92 percent and 90 percent respectively, while Hungarians were least keen at 52 percent. New Zealand wasn’t included in the survey.

In New Zealand, while Air New Zealand trialled the IATA pass earlier this year, there’s been little comment from the government around its plans for any digital vaccination certifications. Prime Minister Jacinda Ardern hinted at vaccine passports back in May, saying that as work continued internationally on the passports, New Zealand would ‘remain actively involved in those discussions whilst also considering other tools for managing and monitoring risk at the border.

The Australian offering, which so far is a vaccination certificate, rather than a vaccination passport, will only be available to those who have completed the two shots of the approved vaccinations – just over 600,000 Australians so far. It pulls data from the Australian Immunisation Register, maintained by Services Australia for the Department of Health.