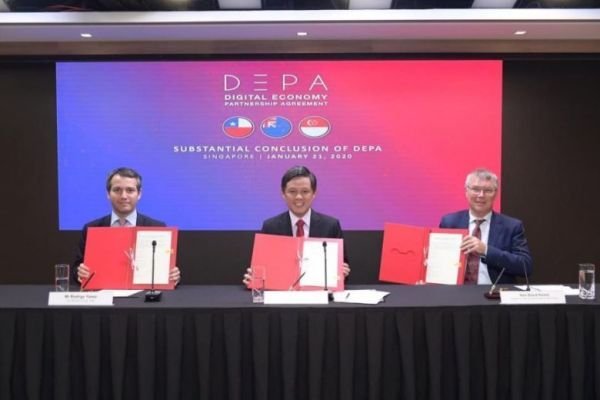 Negotiations for the Digital Economy Partnership Agreement have wrapped, and a new deal between New Zealand, Chile and Singapore – one that should help New Zealand exporters and SMEs take full advantage of emerging international digital trade opportunities – is one step closer.

Negotiations have been underway since May 2019 and there’s a lot in the agreement, which covers such heady topics as cross-border e-documentation, digital ID and AI ethics, just for starters.

“We recognise that digitalisation has transformed the nature of trade, and that as small, outward-facing and trade-dependent countries, we share a common objective of advancing trade in the digital era,” announced the signing countries in a joint ministerial statement.

“One of the key focuses is facilitating the electronic exchange of trade documents for business-to-business transactions and customs clearances.”

“Through the DEPA, we can build on existing trade agreement commitments by leveraging on technology, facilitate business-to-business connectivity in the digital age, and collaborate on new issues intrinsic to the digital realm.”

It’s a big step towards better standardisation and interoperability between countries, and faster, more efficient international trade. The parties are now celebrating the conclusion of negotiations, saying the deal represents ‘a new form of economic engagement and trade in the digital era’.

There are already several international projects designed to deal with such issues of course, including digital economy workstreams with APEC and  the OECD, as well as the World Trade Organisation (WTO)’s negotiations for e-commerce, among others. DEPA will work in harmony with these initiatives, as it looks to address the digital trade challenges of SMEs, smaller nations and developing countries like Chile.

“We recognise international trade rules have not kept up with the unprecedented growth of digital trade. We believe small countries – not just large ones – should help shape the new rules,” he says.

“DEPA will help make it easier for our businesses and consumers to take advantage of digital trade opportunities, while protecting public and private interests.”

And so what are those opportunities? A little bit of everything it seems, but one of the key focuses is on facilitating the electronic exchange of trade documents for business-to-business transactions and customs clearances between the three nations.

There’s a clear opportunity there too. According to IBM’s last reckoning, the processing of trade documents across borders can cost as much as 20 percent that of moving goods.

As for e-invoicing, the signing countries are being asked to adopt new DEPA-approved standards, similar to those of the Peppol (Pan-European Public Procurement Online) electronic invoicing framework.

Other topics covered in the agreement include:

The wording is still being finalised and formal signing of the agreement will likely take place at the upcoming Asia-Pacific Economic Cooperation (APEC) Ministers Responsible for Trade meeting in April this year.

You can read the full current DEPA agreement document.