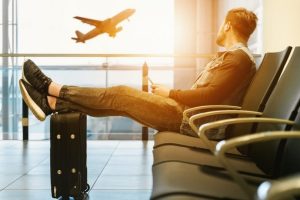 Keen to get us all flying friendly skies again, airline trade body Iata is about to begin testing a digital health pass it says could replace quarantine and, combined with Covid-19 testing, reopen international travel – and sooner rather than later.

The International Air Transport Association is in the final development phase for a digital health pass to manage the secure flow of testing or vaccine information between governments, airlines, labs and travellers.

The Iata Travel Pass is an app which would provide proof of testing and results, or vaccinations, alongside an electronic copy of the user’s passport to prove their identity, all in a standardised form, and Iata’s hoping it will be the golden ticket to revive international travel and lift travel bans around the world.

“The second key is the global infrastructure to securely manage, share and verify test data matched with traveller identities.”

“Testing is the first key to enable international travel without quarantine measures. The second key is the global information infrastructure needed to securely manage, share and verify test data matched with traveller identities in compliance with border control requirements.

“That’s the job of IATA Travel Pass. We are bringing this to market in the coming months to also meet the needs of the various travel bubbles and public health corridors that are starting operation,” de Juniac says.

Iata says the Pass, which is due to launch in the first quarter of 2021 on Apple and from April for Android devices, will provide a global and standardised solution to validate and authenticate all country regulations regarding Covid passenger travel requirements, helping address issues of testing and requirements complexity and variety, passenger confusion, inefficiencies and the growing issue of  fraud and false claims from people wanting to fly.

“Check-in agents need to follow extensive entry requirement guidance and try to determine the authenticity of multiple non-standard test documents passengers present to them,” Iata says. “This leads to health check inefficiencies, errors and fraud – an increasing problem around the world.”

The app will be free to travellers and governments, with airlines paying a fee per passenger for the service, which will be based on Iata’s existing Timatic system to verify documents and uses blockchain.

A pilot with British Airways parent IAG is expected this year.

Unsurprisingly, de Juniac and Iata have been issuing urgent calls for governments to reopen borders to travel.

He says quarantines essentially kill demand for air travel and governments need to immediately consider ‘the drastic socio-economic effect this is having’.

Iata is proposing systematic testing of travellers as an alternative to quarantines.

“In the immediate term that means giving governments confidence that systematic Covid-19 testing can work as a replacement for quarantine requirements. And that will eventually develop into a vaccine program. The Iata Travel Pass is a solution for both.” 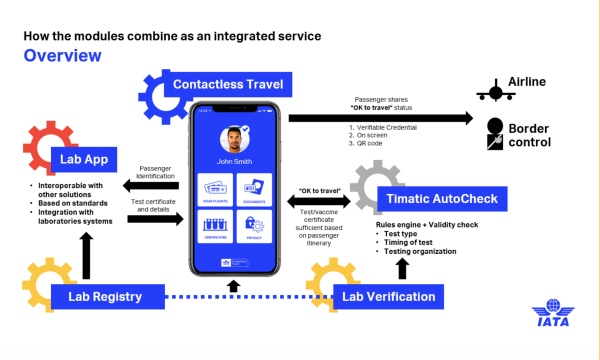 Careen says the app was built using a modular approach, based on open source standards, to facilitate interoperability.

“It can be used in combination with other providers or as a standalone end-to-end solution. The most important thing is that it is responsive to industry’s needs while enabling a competitive market.”

‘Vaccination passports’ have long been touted as a likely future for international travel. Last month Qantas flagged that that proof of vaccination would likely be a necessity in future before passengers are allowed to board.

But Iata has competition in the race to a global standard, with several other apps already up and flying.

Meanwhile, AOKpass, from the International Chamber of Commerce, Singapore startup Perlin, SGS and and security services firm International SOS is already in use on flights between Abu Dhabi and Pakistan.

“Proponents of immunity passports do not yet know the extent of the problem they are solving,” Privacy International says on its site.

“Companies selling their pre-existing digital identity solutions should be viewed with suspicion; this is not a problem that has been ‘solved’ as we have yet to define what the problem is.”

For Kiwis, the issue may be a moot point, with the New Zealand Government maintaining a hardline on border security and even travel bubbles remaining grounded.