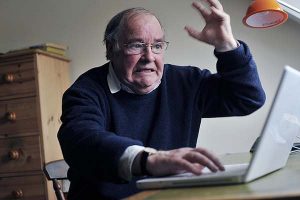 CAB report a reminder not to forget non-digital citizens…

In the rush towards digital transformation, it’s easy to think online access is everything. But a new report from New Zealand’s Citizens Advice Bureau paints a different picture – one of a sector of society left frustrated, stressed and excluded as government services go digital.

Face to Face with Digital Exclusion, based on interactions over three months with nearly 4500 Citizens Advice Bureau clients for whom digital exclusion was identified, throws the spotlight on the impacts of government digital services and highlights the detrimental aspects of the assumption that digital is best.

It also sounds a warning bell for non-government agencies, with its reminder that people remain at the heart of business operations, whether government or otherwise.

Government services [are] increasingly not about choice, with many government agencies scaling back on non-digital channels.

“Unfortunately, what many people experience is services designed to be ‘digital first’ rather than ‘people first’; services that appear to provide convenience, efficiency and cost savings for government, rather than for the people being served,” the report says.

“For those who struggle to interact with government, the digital transformation of the public sector often makes things harder and fails to meet people’s needs.”

Lack of access to a computer and low levels of digital literacy are just the starting point in a range of barriers people face, Sacha Green, CAB national advisor and report author, says.

“People are also being excluded because of difficulties with reading and writing, because of financial barriers including not having a means to pay online, and because of disability and language barriers,” she says.

A lack of motivation or confidence to be online was also cited.

“Our CAB volunteers are seeing people daily who feel like their choices are being taken away by the Government’s focus on digital services,” Green says.

Perhaps surprisingly, the report challenges the assumption that it’s primarily older people who are struggling with online services, finding instead that digital exclusion is being experienced by people across age demographics.

It’s a problem which has also been highlighted in Australia. While the Australian Digital Inclusion Index 2019 found that digital inclusion is improving in Australia, it also found that the gaps between digitally included and excluded Australians was still substantial – and widening for some groups.

“Although online government, community and commercial service systems may generate some transactional benefits, they can be difficult to navigate, particularly for those for whom English is not their first language,” that report notes.

“For those experiencing digital exclusion, their experience of government services were that increasingly it is not about choice, with many government agencies scaling back on non-digital channels, reducing access to paper-based resources and in some cases making digital the only option,” Face to Face with Digital Exclusion says.

It cites the example of Immigration NZ closing public counter services and no longer printing of visa-related forms; Tenancy Services making the option of completing paper-based Tenancy Tribunal applications ‘almost invisible’ on its website, and the Ministry of Business Innovation and Employment making Employment Mediation Services requests an online-only process.

Digital also often wasn’t simple and straightforward either. People trying to use the RealMe government-operated online authentication service were told not to use Gmail to register – despite Gmail being one of the most common email services used – and to avoid using an iPhone or iPad and instead use a ‘proper computer’.

“The experience of many people is that the digital transformation of government services is not putting people first, but rather is putting digital first. This means that people who are already vulnerable and are negatively impacted by social inequality are at risk of being further disadvantaged,” the report says. “A clear example of this was the digitalisation of aspects of our social welfare system and the resulting barriers some people face when they are told to apply online, or to use MyMSD, when what they really need is time with another human offering face-to-face support.”

Kerry Dalton, CAB chief executive, says given that interacting with government services is often about accessing rights and entitlements, it’s important there aren’t any barriers in the way.

“There needs to be genuine choice for people about how they can interact – whether online, face-to-face, through others or by phone. Particular attention must be given to the needs of Māori and Pacific Peoples who are being disproportionately disadvantaged,” says Dalton.