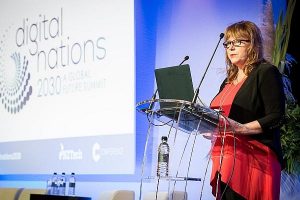 Minister Curran sees digital inclusion as top of the agenda…

The Digital Nations 2030 international summit this week saw governmental and digital types in a conflab on what a future digital nation should look like.

It was an opportunity to hear directly from the minister who now holds the portfolios most likely to shape the country’s digital future. Clare Curran is Minister of Government Digital Services (a new portfolio); Communications, Broadcasting and Digital Media; and Open Government – and, while highlighting the crucial role played by connectivity in advancing an online nation, she also said it takes more than infrastructure.

Curran’s priorities (and there are many), she told the opening of the summit, are to build trust with citizens through having an open and transparent government, to reduce the digital divide, strengthen protection of New Zealanders’ digital rights, take a combined approach to the digital economy, increase productivity and the economic benefits of the internet, grow New Zealand’s identity and build cultural capital by enhancing the voice of independent public service media, and drive the ongoing transformation towards a more open, digital Government.

“This approach means being future-focused, modern and innovative. It means taking some risks, moving away from old paradigms that are no longer effective; re-imagining government’s role and relationship with citizens and industry; working with and showing leadership to industry and communities where technology the driver of a thriving, agile, intelligent, compassionate digital nation that leaves no-one out,” Curran said.

Providing some insight into what ‘digital’ really means at a national level, she said it means being a country that leverages data, technologies, and digital skills to realise a more responsive, efficient and participatory government. “Ultimately, in our New Zealand government context, we see digital technologies as the means to transform the way we deliver services to the public and to engage them in the decisions that affect their lives.”

It’s something citizens are increasingly on board with, too. Just this week, Unisys released research which shows that for the first time, more citizens want to engage with government digitally than any other way. This is a trend, one imagines, which can only accelerate, particularly as the benefits of high speed connectivity thanks to the UFB rollout, continue to be enjoyed by more citizens. And by way of very good example, New Zealand’s first fully digital census launches this week, although to be fair that was initiated well before Curran’s watch.

Curran said digital transformation in government service delivery will only be successful if it is understood that embracing technology is not enough. “To truly transform, we all need to work differently, focus on the core business of serving the public, and regularly engage with citizens and check we’re meeting their needs –  and not pay lip service to those goals.”

It’s an observation which could apply just as well to the private sector, with ‘citizens’ substituted for ‘customers’.

While noting that New Zealand – as a member of the D5 nations – is seen as a world leader when it comes to digital government (a point to which those who have experienced government elsewhere can attest), the newly minted Coalition government doesn’t appear to be resting on its laurels.

Said Curran: “We can still do better…we have room to better take advantage of digital opportunities to be an innovative, progressive and equitable country that is responsive and resilient in our changing world.”

Which brought us to Curran’s vision – of seeing “all New Zealanders are thriving in a digital world”.

A lot of that has to do with access to digital tools and connectivity.

And that led Curran to “the principle of universality – which we don’t have in New Zealand right now.”

New Zealand does enjoy exceptional access to connectivity; around 89 percent of us are online. It is those who aren’t online which worry the Minister: she said Otago university’s social deprivation index has identified ‘lack of internet access at home’ as the highest weighted factor affecting social deprivation for working age New Zealanders.

“We need to make sure that everyone is digitally included,” Curran said. “I want all New Zealanders to have access to the tools, skills, motivation and trust to fully participate in our digital world. Digital divides have costs in the form of wider social deprivation, the risk of lower educational attainment, and fewer opportunities to realise potential. We need to address the gaps to give everyone the same opportunities.”

And, in an oblique reference to the UFB rollout, Curran said “Success isn’t about building an infrastructure and hoping for the best. It’s about developing people’s skills for those jobs of the future, and that will come through collaboration. This government will focus more on skills and ensuring our education system is equipping our young people for the future – but it’s more than that. It’s also about learning for life; ensuring that your skills development never stops and that you are supported to do so.”

It’s a good point: while the ‘field of dreams’ approach works fairly well for those who are already online, for those who aren’t, getting connected can appear daunting. Impossible, even. Providing support, while also working together (something Curran stressed as necessary), is the best bet to get others connected. There’s also little question that those who get online tend to join ‘the way the world is moving’. If that can deliver improved social outcomes and help those Kiwis who are being left behind, even as the world races into an increasingly digital future, so much the better.

Curran noted that “Digital Nations 2030 is not just about the state of our digital nations today, but how we will embrace the opportunities and tackle the challenges that arise in the future.”

But, said Curran, “This goes beyond technology.” The big questions, therefore, and the Minister did raise them, include:

The answer, at this stage, is to do what the Coalition apparently does best. Have conversations.