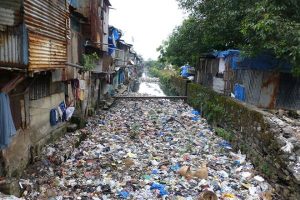 We’ve all seen the images: From great swathes of floating trash forming giant, rotating islands of plastic in the ocean and waves of trash coming ashore on beaches such as Montesinos in the Dominican Republic after storms, to the recent global climate change protests, to images of inequality around the world.

We are, we’re told, a planet in crisis with urgent action needed. That need for action was behind the United Nations’ Sustainable Development Goals (SDG), launched back in 2015 and laying out the key global challenges, including environment and social, that need to be addressed by 2030.

But with experts warning that we’re at risk of not meeting the 17 goals, a new report is pushing disruptive technologies, including AI, IoT and big data to drive the SDGs forward – with tech leaders as SDG champions.

The latter is the fluffiest alongside others that amount to achieving basic human living standards and slowing the atrocious environmental destruction that are a daily reality in most third world cities. Impending global cataclysmic destruction, and digital models that hypothesise it, are a much cleaner and popular platform for activism than advocating for, and funding, proper rubbish collection, running water and decent toilets.

A lack of action from business has left most sceptical that the world will ever deliver on the goals.

The Accenture Strategy CEO Study on Sustainability says while 90 percent of CEOs said in 2016 that they were personally committed to ensuring their companies lead on the sustainable development agenda, just 48 percent reported this year that they are implementing sustainability into their operations.

Key constraints? Political uncertainty and economics – including the pressure to operate with ‘extreme cost-consciousness against investing in longer-term strategic objectives’ – and an absence of market pull.

But Digital with Purpose: Delivering a SMARTer 2030 from Global Enabling Sustainability Initiative (GeSI) and Deloitte says digital technologies can help to close the gap to some of the targets – so long as it’s deployed appropriately.

“The opportunity, both for the ICT sector and the sectors and organisations at the forefront of deployment is enormous,” GeSI says.

Sam Baker, a partner in purpose and sustainability strategy consulting with Deloitte and co-author of the report, says “Digital technologies can galvanise our efforts to confront the massive challenges we face globally.

“Company leaders have to work across organisations to use these powerful tools with a purposeful mission to enact meaningful, worldwide change.”

The report outlines the potential roles of seven digital technologies – digital access, fast internet, cloud, IoT, cognitive, digital reality and blockchain – from monitoring and tracking issues and analysing and optimising usage of energy and materials to minimise climate change (yep, there it is), through to taking advantage of machine learning, AI and the cloud’s computing power to accelerate drug and crop development and address issues related to poverty, hunger, disaster impact, education and healthcare.

Of the 169 SDG targets, GeSI says 103 are directly influenced by digital technologies, enabling us to connect and communicate, monitor and track, analyse data, optimise processes and predict when intervention is needed, augment human abilities and automate systems.

“This requires both the ICT sector and the key sectors who deploy these technologies to put this agenda more intentionally at the centre of who they are and what they do.

Nick Owen, chairman and partner with Deloitte and report co-author, says CIOs play a vital role in evaluating when, where and how to adopt the most pertinent and applicable technologies and in determining how the tools can shift their business and organisational performance.

“It also requires a substantially enhanced understanding of how actions lead to impact on the achievement of the SDGs, be they the actions of government, businesses, NGOs or citizens’, GeSI says, rather hitting the nail on the head. All the digital metrics and theory in the world doesn’t save the kid dying from diarrhea after playing in a stream polluted with human excrement.

Anyone who has watched the Netflix series portraying the efforts of the Bill and Melinda Gates Foundation to create a sustainable self-contained sanitary system will understand that it might take a bit more than digital initiatives to clean up the open sewers of the third world.

Perhap there is a fundamental mindset needed to shift budgets away from digital theorising toward more tangible initiatives.