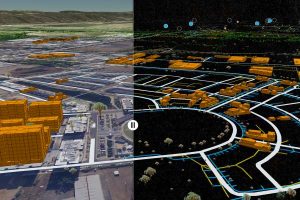 Digital twins appear to be on a roll…

They are popping up in field support, manufacturing operations and infrastructure planning and even featuring in recreations of cities and entire states.

The data-based replicas bring together disparate data sets to create a digital model of the real world that can be experimented with to inform decision making. Much like the control experiments of a high school science class, digital twins enable organisations to make changes to the twin, without impacting the real world offering, experimenting with processes and products safely.

The New South Wales government debuted its spatial digital twin of Western Sydney, developed with CSIRO’s Data61, earlier this year, while Infrastructure New Zealand has just released a report calling on government and industry to ‘take this opportunity to be clever with our data to build, run and maintain our infrastructure in ways that deliver the services needed for New Zealanders to flourish’.

Lendlease uses digital twins across its business, and digital CEO Bill Ruh says the technology has enabled the company to identify five to 15 percent of the problems in the design phase – before the company gets to construction, enabling it to solve problems earlier, saving money and building safer, better, buildings.

It’s a market that has analysts enthused, with Juniper the latest to offer up big predictions. It says global spend on digital twins will hit US$12.7 billion by next year – up 17 percent from 2019, with Covid expected to shave one percent off 2020 spend.

The Juniper report, Why Digital Twins are Critical to the Industrial IoT, identified manufacturing as the single biggest sector for twin deployment, accounting for 34 percent of overall spend in 2021. Energy and utilities comes second at 18 percent.

In Australia and New Zealand, interest in digital twins is ramping up, particularly among infrastructure companies and local government.

It’s just the first phase of a wider project which will include other areas of NSW.

“The digital twin represents a step change in how we visualise environments and processes taking place in them,” Henrikson says.

“Cities have never been so data rich as a result of connected sensors and many are growing vertically in addition to horizontally. This creates incredible opportunities to overlay 3D/4D data from satellite and drone technologies which is spatially accurate, to show the bigger picture of what’s happening above and below the ground over time.

“An infrastructure developer can now use the digital twin to identify the location of underground utilities before building works commence, or see the potential impact of planned future infrastructure.”

It’s that potential that Infrastructure New Zealand is keen to tap.

It is calling on the New Zealand government, infrastructure owners and operators and industry to collaborate on a digital twin for New Zealand. It has released a report, in conjunction with the University of Canterbury Quake Centre and the Building Innovation Partnership, calling for the development of data governance, data systems and implementation pathways ‘that will enable the value of New Zealand’s infrastructure data to be leveraged for the well-being of all New Zealanders’.

“Increasingly around the world companies, industries, cities and even whole countries are developing digital twins to support the planning and decision making process,” the Unlocking the Value of Data: Managing New Zealand’s Interconnected Infrastructure report notes.

The country has more than $300 billion in infrastructure assets and will spend another $100 billion to $150 billion over the next 10 years in maintaining and improving infrastructure, Blair says.

“By mirroring our physical environment digitally, we can easily discover potential challenges and shared solutions between infrastructure that too often is disconnected from each other.”