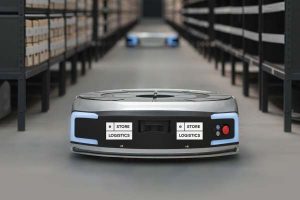 3PL operation has automated fulfillment to meet the Amazon challenge…

Australia’s e-commerce market has received a service boost from a 3PL that is promising same-day delivery for orders before 4pm – and it’s thanks to a fleet of robots.

The first fulfilment centre – an 8,383m3 facility in Melbourne – went live in March, with a second, 26,000m3 warehouse going live in August in a $40 million autonomous mobile robot (AMR) project.

“We are making leading edge technology available to retailers of all sizes to enable them to improve their fulfilment.”

Leigh Williams, eStore Logistics founder and managing director, says the new lineup of AMRs, supplied by robotics developer Geek+, has made fulfilment three to four times more efficient, with cut off times for same day delivery moving from around 11am out to 4pm.

Some of eStore’s retail customers have also seen decreases of up to 30 percent in their logistics costs, thanks to the robots intelligent capacity optimisation.

“What we are doing is making leading edge technology available to retailers of all sizes to enable them to improve their fulfilment performance while remaining profitable and focusing on what they do best,” Williams says.

eStore’s clients range from small pure play online retailers doing as little as 50 orders a day, through to large retailers doing tens of thousands of orders per day and omni-channel retailers with complex supply chains. These include independent stores and big box retailers such as Myer and David Jones and their own brick & mortar outlets, as well as online sales.

The company’s four fulfilment centres handle millions of SKUs of products ranging from iPhone screen protectors to three seater couches and king size beds, although not all suit robotic handling.

eCommerce sales in Australia spiked during the Covid lockdowns, and while some reduction has been seen since Australia began opening up again, Williams says it hasn’t gone anywhere near back to pre-Covid levels.

Those pre-Covid levels of around 10-11 percent, put Australian online sales well behind the likes of the UK, where figures sit around 20 percent, highlighting the growth potential of the market.

ABI Research has forecast more than four million commercial robots will be in use in over 50,000 warehouses by 2025, up from just 27,000 robots  and less than 4,000 warehouses in 2018. Driving that demand is the need for greater flexibility and efficiency, as both demand for ecommrece and demand for same day delivery increase.

eStore investigated a range of options as part of a drive to improve speed of delivery for Australian online retailers.

Geek+, which announced in June that it had raised more than US$200 million in Series C funding – the largest fundraising in the industry to date – provides AI-imbued logistics robots which replace traditional conveyor belt-style setups, which Williams dubs ‘fixed automation’.

He says the Chinese company’s AMRs provided the highest flexibility, lowest capex outlay and the fastest return on investment.

“Fixed automation is high capex, not very flexible and you need to lock in your business case.

That’s fine, he says for long established brands with fixed product lines and little change – and expecting little change in the future. But for a newer multi-customer business like eStore, which started in 2008, and has rapid growth and frequently changing SKUs to be handled, ‘it’s just too much risk, because those old types of systems are not flexible and agile enough’.

“Other systems we looked at had a five to seven year payback and that was best case scenario and those systems were not flexible. They used specific storage mediums which you couldn’t change or adjust, so it was one size fits all and if your product profile or order profile changed – say your basket size got bigger – the payback would be blown out significantly, making the project not feasible.”

But it’s the artificial intelligence and algorithms running in the background which are ‘the really cool stuff’, Williams says.

That intelligence means that when stock comes in from a supplier, the robots use historical data and 3D cubing algorithms to work out the most efficient way to store the stock for capacity optimisation. It also consolidates stock across the facility to maximise efficiency of storage.

“That’s what enables our retailers to get decreased footprint in the warehouse and to reduce their storage cost,” Williams says.

As sales orders pool down from retailers’ order platforms and into eStore’s own systems, any robots not picking orders are busy rearranging the stock within the warehouse to ensure it’s in the most efficient location. This helps when the robotic pickers start packing the orders, the robots don’t have to transport stock so far, increasing the velocity and throughput of order picking.

The algorithms and AI, and the storage utilisation were key factors setting Geek+ apart from its nearest competitor, Grey Orange, whose AMRs were also considered by eStore.

“Logistics is a critical function in ecommerce and getting warehousing and fulfilment right is super important.

“By making this technology available to retailers of all sizes, we’re enabling them to improve their fulfilment performance without having to research and invest in the technology themselves.”

Amazon announced yesterday that it is constructing its first robotic fulfilment centre in Australia, with the Western Sydney warehouse expected to be up and running by the end of 2021.

Williams notes that many of eStore’s customers also sell on Amazon. “So our system enables retailers to compete with Amazon, but it also enables them to provide fast shipping for Amazon too.”

And while robots are often feared as a technology that will steal jobs, Williams say not a single job has been lost at eStore. In fact, the addition of the robots is enabling the company to widen its potential staff base to bring older, or less fit, people in to a market traditionally requiring more strength and stamina.

“We have made the job a lot easier for people and they go home feeling less tired, with less bending over. It’s a safer environment and it opens up the door to a range of people working in our centres.”