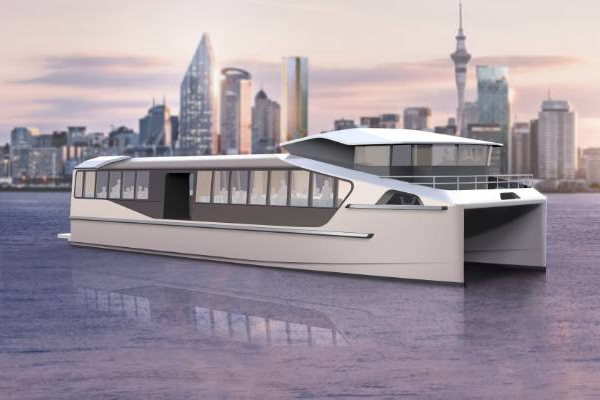 Wellington goes electric, but what about the rest of us…

The Southern Hemisphere’s first fully-electric passenger ferry is on the water and set for commercial service launch in a matter of weeks. But while the Wellington service might be all go, electric is a more distant dream for other Australasian cities.

The Wellington Electric Boat Building Company vessel, built for East By West ferry company, hit the water for sea trials earlier this month, with an official launch scheduled for 09 September.

It’s a carbon fibre 19 metre, 135 passenger ferry, which will provide round trip services from Wellington CBD to Days Bay and Matiu/Somes Island.

“We are the first in the southern hemisphere to have taken a vessel of this kind off the drawing boards, and onto the water.”

The Kiwi-developed vessel is the first fully electric high performance passenger ferry in the Southern Hemisphere.

“We are the first in the southern hemisphere to have taken a vessel of this kind off the drawing boards, and onto the water,” says Fraser Foote, managing director of WebbCo, which was formed to build the ferry. 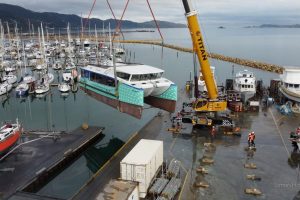 In Auckland, where transport is the region’s biggest carbon contributor and the city has committed to halving carbon emissions by 2030, moves have long been afoot for electric vessels.

Auckland Transport (AT) has budgeted $30 million over the next three years to pay for two $12 million electric ferries and charging stations, as it pushes for decarbonisation of the ferry fleet.

Michael Eaglen, co-founder and chief executive of Kiwi company EV Maritime, which is working with key Auckland ferry operator Fullers360, says its first vessel is expected to be under construction before the end of the year, with the first two 24 metre carbon fibre catamarans, with capacity for up to 200 passengers, expected to launch in mid-2023.

EV Maritime, founded in 2019, has applied with Fullers360 and electricity provider Vector for $20 million in funding from the government’s ‘shovel ready’ project fund.

EV Maritime’s work has received government assistance in the past, in the form of Callaghan Innovation funding – an R&D Project Grant and an intern under the Experience Grant, as well as drawing on the agency’s R&D Loan Scheme. Fullers too, is chipping in. The company says its invested more than $1 million in electric, hybrid and hydrogen ferry R&D, including with Hamilton Jet and $300,000 in loans and R&D assistance for the EV Maritime work.

The Auckland trials were expected to begin this year. Covid, Eaglen told iStart, has been the main issue putting paid to those plans.

“Public transport took a hit [with Covid], but ferry patronage has actually come back more quickly than bus or train, so we’re starting to see Auckland Transport push forward once more with their ferry strategies.

“There are also many parties involved in making something like this happen and it’s important to get it right in all facets – not just the boats, but understanding the operating differences, safety systems, electricity requirements and so forth,” he says.

“Although it probably looks from the outside like things are taking a long time, I’m quite sure we will look back and realise that the change we brought about together was actually very quickly.”

Eaglen says in contrast to some other harbour cities, Auckland’s ferry network operates over some quite long distances at high speed.

“Delivering both speed and range has been a key technical challenge, but we have pulled together the best and brightest from New Zealand and around the world to deliver a genuine long range high speed ferry,” he says.

He admits charging – and indeed the running of electric vessels – will require new ways of thinking for ferry companies.

“Yes they will cost less to run and deliver greater reliability than a diesel fleet, but much more attention will have to be paid to scheduling to share the recharge opportunities around the fleet intelligently.

“The boats recharge whenever they have the opportunity: they will charge at most of the wharves while they are stopped for loading and unloading passengers and take more of a top-up if they need it when they come off peak-hour services. “

The total amount of energy involved in powering a fully electric fleet is ‘quite substantial’ he notes. It’s that energy usage which is why electric is a big push – the alternative is the continued burning of vast amounts of diesel. East by West says its tow diesel ferries use about 250,000 litres of fuel a year between them.

The power aspect is however one stumbling block, at least in Auckland, with the chargers are likely to require some power grid upgrades in some locations.

For Waiheke Island, it’s an even bigger stumbling block. While Eaglen says electric boats are ‘certainly an option for Waiheke and technically can happen now’, the boats would need to be larger than the small commuter vessels planned for Auckland, due to large commuter and tourist numbers for the busy Waiheke routes.

“However, to make electric boats a reality for Waiheke they will need to recharge on the island as well as Downtown.

“The chargers would require availability of several megawatts of grid power to be available on the island. As I understand it, that will most likely involve an upgrade to the power cable which supplies the island.”

Fullers360 says it wants to add at least five electric or electric hybrid ferries to its fleet in the next five years. The company is eyeing up hydrogen longer term for longer runs such as those to Waiheke, Gulf Harbour and Rotoroa Island. The hybrid vessels are expected to be converted to electric/hydrogen once hydrogen is more viable.

Last year the New South Wales government announced plans to retire some of the Manly ferries and replace them with smaller ferries.

Atlassian co-founder and CEO Scott Farquhar has suggested ferries, operating in a relatively protected environment, could be electric.

His comments earlier this year came after Norway put the world’s largest electric ferry into operation in March in Bastø Fosen. The 143m vessel can handle 200 cars/24 truck and 600 passengers and does up to 20 trips a day – requiring a 7.2MW ‘megacharger’.

NSW Transport Minister Andrew Constance has been pushing a retrofit of smaller harbour ferries with electric engines within five years. He’s previously stated a goal of the entire transport fleet being electric.