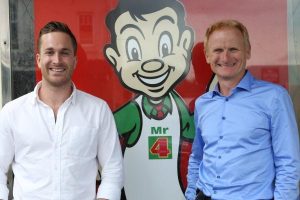 Auckland-based software company IMAGR is launching its Smartcart shopping solution at Four Square Ellerslie. The ‘artificial intelligence shopping experience’ , as IMAGR describes it in a statement, comes as retailers look to give consumers streamlined shopping options to compare with those offered by Amazon Go in Seattle. But the real question is just how ready consumers are to see digitisation of a traditional process which has a long history.

Smartcart is built around image-recognition technology that identifies products placed in a shopping cart, eliminating the need for barcode scanning, checkouts and queueing. Amazon Go uses a similar image-recognition solution in its stores.

“This is the first significant step in enhancing the way we do our shopping here in New Zealand and abroad,” said IMAGR founder William Chomley. It is also another potentially significant step in the development of the shopping trolley, which was first introduced in 1937, the invention of a supermarket owner named Sylvan Goldman. Interestingly, Goldman came up with the trolley for similar reasons which motivate today’s ‘smart’ boys: increased customer convenience.

‘Another’ step because the idea of smart shopping isn’t exactly new. All the way back in 2003 Wal-Mart cancelled an RFID-driven ‘smart shelf’. More recently, the American retail giant was reported to be doing something similar to Smartcart. Closer to home, an infrared shopping trolley was trialled in Brisbane in 2012, and Singapore Telecom had a go at introducing an image-recognising smart cart synced to a smartphone way back in 2011. The shopping cart it seems has littered history with new but ultimately unsuccessful innovations.

In the case of shopping trolley automation, being smart isn’t necessarily simple and shopping with Smartcart requires action from the customer. Download (yet another) app, create an account and link a payment method to it. Then pair your smartphone with the shopping cart. As you add products, the items appear on your phone’s virtual basket.

What happens when done wasn’t covered in IMAGR’s statement but one imagines a checkout process completes a transaction when wheeling the trolley out of the store (see this video of the process in action. Interestingly, the video, uploaded in 2016 before AI came into vogue, doesn’t mention AI).

Given that overhead, it is perhaps odd that Four Square, the oldest of Foodstuffs’ brands, is the choice of outlet for trialling the technology. Four Square is more of a convenience store for most, rather than the destination for the family grocery run, where fellow Foodstuffs brands New World or Pak ‘n Save might see repeat purchases and proper sized trolleys being filled.

Where digitisation might run into further challenges includes how well a tech-enabled – and no doubt expensive – trolley will stand up to the abuse these devices must stand up to. Already, shopping carts represent a major cost to supermarket operators; clever ones will cost a lot more and they are probably likely to require tech-support in addition to the occasional drip of oil to a squeaky wheel.

Smartcart is Chomley’s idea and he has worked on it for two years after conceptualising a solution to improve convenience and help address the frustration of checkout queuing; the company’s statement said the current retail landscape calls for brick and mortar retailers to find more efficient ways to deliver tailored, frictionless experiences and Chomley’s Smartcart is said to be the answer.

“Personalisation and convenience are becoming industry norms, bricks and mortar is no exception, people want ease of access to products and to bypass queues. We’re focused on creating a hyper-personalised in-store experience that also includes an ‘alternative’ method for checking out,” he said.

Foodstuffs North Island CIO Peter Muggleston (pictured with Chomley at right) said brick and mortar retailers must embrace AI technologies to enhance consumer experiences and ensure they lead the field in what they offer. “This technology will give consumers more options, reduced wait times and variety during their store visits, giving our staff more time to offer their advice and help in other ways,” he said.

Smartcart doesn’t just detect what goes into the trolley. It also applies machine learning technology to identify the patterns in a customer’s behaviour and make suggestions for recipes as well as guiding users around the store, based on their product choices.

Going further upstream into the supply chain, Smartcart is said to help with inventory management, cost reduction and analytics. IMAGR said it is also working on ways to deliver tailored promotions to customers as they shop.

Excited and keen to give it a go? Cool your boots, because it isn’t yet fully ready to have the wraps taken off, although Foodstuffs said customers can get stuck in ‘at a date soon to be announced’.

While Foodstuffs is the first FMCG retailer in New Zealand to pilot Smartcart, IMAGR said it is in talks with retailers in Australia, the United Kingdom, Europe and America.

Competition in the ‘smart shopping’ space is likely to be fierce, however: industry heavyweights including IBM and Panasonic are investing in the area, with the Evening Standard reporting on a trial in London of the former’s RFID-driven solution. There are also random, no-name Smart Shopping Cart videos, with Portuguese subtitles, suggesting widespread interest in digitising the process of buying goods.

The questions which remain, then, include if consumers see queues as that much of a problem that they are willing to install software and sync with a trolley to buy groceries. Will they let the trolley tell them where to go in store? Also, how will ‘special’ trolleys stand up to abuse? And the biggest of them all, is grocery retail, which has stood up rather well to the obliteration it was supposed to suffer at the hands of online shopping, really ready for this sort of digitisation?

It’s a brave new world, to be sure and one can’t help but want to give those new-fangled trolleys a whirl. If only the darned Bluetooth would sync, that is.