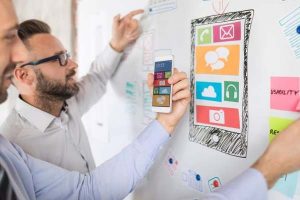 It’s not a ‘nice to have’ anymore…

As businesses of all shapes and sizes become software businesses, serving up websites, mobile apps, chatbots, SaaS and enterprise apps to customers both externally and internally, user experience design is increasingly coming to the fore.

“More and more companies are interested in UX because, at an intuitive level, rather than an analytical level, they understand it can provide a competitive advantage,” Lumsden says.

“Adding new features to a product is relatively easy. Ensuring we’re solving the right problems is not.”

“If your thing is easier to use, more delightful to use or it makes a customer’s life easier then it will get used more and return better benefits. People are embracing that.

“Oddly enough sometimes it feels like it’s being led by government clients – they have a social mandate to make their stuff accessible, so they do take it quite seriously.”

So how do you get UX right?

Going guerrilla: Know your users
“It seems really facile, but I just can’t overstate this enough: Know who is using it, the context in which they’re arriving in it and almost everything else flows from that,” Lumsden says.

He says there is still often a mindset that knowing the customer means a big – quantitative – research project which can only be undertaken by an enormous company or the qualitative  guerrilla research – going and asking users – which Lumsden says ‘is better than no research at all’.

“It is only a real issue when the qualitative stuff gets dressed up as quantitative research and you’re making decisions on very small sample sizes.

“Getting to know your users or customers is essential and I don’t know if people do enough of that.”

Lumsden attributes that in part to a wariness of showing their hand too early in the piece. “I’ve seen it with some clients – until they are absolutely certain about it they don’t want the word to get out. So that makes doing user research a lot harder, especially for a new feature or new thing that is being released.”

Embrace new superpowers
“It’s time we stopped drawing lines around who is a designer and who is not,” says UX Collective’s The State of UX in 2020 report. “UX is a fast-growing discipline and we need to enlist everyone’s superpowers in order to deliver the experience people really need.”

Lumsden agrees – to a point.

“The democratisation of design is a hot topic. You get some really big luminaries like Ideo in the US who believe everyone should be involved, the whole product team should be involved in the design, particularly the user experience aspect of it, but they’re also super heavily focused on knowing your users.

“If you know your users you can do that and the more opinions and more views to get a better product.

“But consensus-led things can take a little longer too.”

“A product mindset is much better than a project one for constantly developing and responding to changing requirements,” he says.

Instead of having a finite project, product thinking allows for the continuing development – including funding and an ongoing project team.

Great products do less, but better…
“Adding new features to a product is relatively easy. Ensuring we’re solving the right problems is not,” The State of UX says.

It cautions against feature bloat.

“When facing issues on how to keep a product relevant over time, the first reaction is trying to course correct the product by… adding even more features. We are once again perpetuating the same mentality that created the issue: building on top of something that, to start with, wasn’t right.”

“In 2020, being intentional about our designs means knowing that our job is to solve user needs, not to keep developers busy.”

“I have lot of sympathy for the idea of get in, get out, because people’s attention is so fragmented now that if you can make tasks simple to do, quickly, that’s a success.

“But you do need to have a backup.”

He cites banking apps as an example: You can’t do the full array of banking via your banking app, but what you can do you can do very well and much faster than on the internet banking sites. But if you need more complicated things, you use the website.

Design for the post-truth era
A report from the UX Collective on the State of UX in 2020 also cautions that with the rise of deep fake videos and misinformation, there’s more demand than ever to focus on designing for transparency and encouraging critical thinking from users.

“As product designers in the year 2020, we have a lot of work ahead of us: Designing tools to filter out fake content, making users more aware of the treachery of deep fakes, and stopping the spread of misinformation,” The State of UX in 2020 says.

“But even more importantly, we will be responsible for raising awareness inside of our organisations, establishing principles around truth and reporting how our platforms might be misused by agents with hidden agendas.”