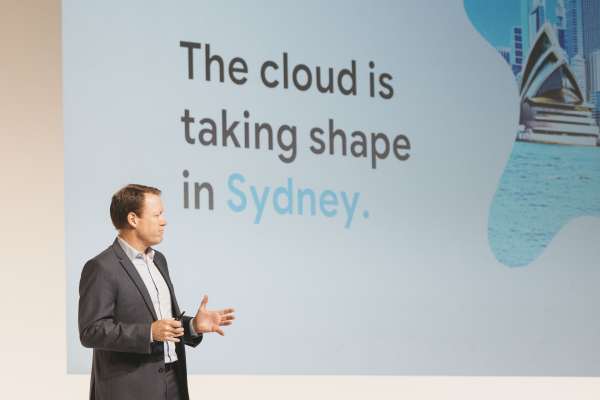 With an investment of some US$30-billion, an expansion of the number of regions in which it operates from three to 18 in just one year, and the announcement of multiple new products and services, the Google Cloud means business globally – and in Australasia, where it added a data centre in Sydney a year ago.

That was the overwhelming impression the Google Cloud Summit in Sydney this week set out to establish. Along with the usual ‘rah rah’ one comes to expect at vendor conferences, and the predictable preponderance of men in the nerd herd attending (and, to be clear, we’re quite OK with that), ample evidence of Google’s cloud ‘for business’ chops was presented.

“You have to create an intervention and make it inconvenient to continue down the old path.”

From a rapidly expanding partner ecosystem including the usual heavyweights like PwC and Deloitte (and around 998 others), through to product features and corporate customers (including PwC and ANZ), it all had the necessary gloss and sheen of a well-honed operation.

But there is a fly or two in the ointment. Despite ‘cloud born’ advantages, Google in the enterprise is the slow cousin compared to the real smart Alecs of -aaS: Amazon Web Services and Microsoft Azure (check out this detailed market share information which has Google languishing waaay behind, barely mustering single figures).

This is an anomaly: AWS started out as a bookstore, not a search engine, and Microsoft’s transition from a olde worlde on-prem vendor to a cloud business Forbes describes as ‘beating Amazon, Google and everyone else’, is nothing short of miraculous, no thanks to erstwhile CEO Steve Ballmer.

Be that as it may, it’s probably not incorrect to suggest that with its rapidly expanding footprint and the hefty investment going into Google Cloud Platform – the ‘proper’ term for the suite of cloud computing services – customers can look forward to the ante being upped in the so-called cloud war; demonstrating remarkable consistency, Forbes paradoxically says Google’s winning the fight.

Supercharged information
After a keynote in which he said Google’s intention with its Cloud Platform mirrors the company’s fundamental DNA of ‘organising the world’s information and making it accessible and useable’, A/NZ country manager Colin Timm explained that it is looking to ‘supercharge customer information with AI and machine learning’ – and there are plenty of enticing products there.

Coming soon to our region (planned for Q4) is BigQuery, a data warehousing solution with built-in machine learning. One partner enthusiastically declared that this development means ‘we’ll no longer feel like second-class citizens’. Clearly, he has a use for the technology.

Timm stressed that Google’s strengths lie in open source, cloud first principles and prominence with container technology (including Docker and Kubernetes) which spans the cloud and on-premise deployments.

As for features, Google live-demoed some of those ‘easy to use’ (while the products might have names which seem to change constantly, Google’s hits are generally user-friendly) AI and ML tools, showing how to train a computer to recognise various treats, including a Tim-Tam, a bag of Maltesers and a hundreds and thousands, and enunciate what they were. The computer even picked an odd one out, declaring ‘that’s Vegemite, maaaate’ to appreciative nerd laughter.

Minnow nibbles at whale
There’s another aspect of the enterprise where Google is a minnow looking to eat a whale and that’s in its office productivity applications. Now called G Suite after a dizzying array of name changes over the course of its some-12-year lifespan, and possibly better known by it’s next-to-last name Google Apps, the Microsoft Office pretender is chipping away at it.

It has, we were told by Google Cloud technical director Jenn Bennett, some 1.4 billion users, with four million businesses paying for the privilege (up from three million last year). Sounds a lot, until you consider the MS Office 365 behemoth’s 120 million business users. What’s new? AI is built into the suite, so it does stuff like suggesting responses, identifying available calendar slots and generally working to make your life easier (or harder, if you’re the sort of person who likes not being online constantly and glued to a screen every waking moment).

Said Bennett: “Transformation is not just about technology, but also about people and how they work.”

Major customer PwC has globally moved to G Suite from Lotus Notes; no prizes for guessing the real challenge for this rollout was change management. That was confirmed by PwC chief digital officer Hilda Clune, who explained that: “To get adoption, you have to make choices to remove things. Change is an imposition, so we made choices with what to take away as well as what to give [users]. You have to create an intervention and make it inconvenient to continue down the old path.”

Different strokes for different folks: she said for some, it came down to working with them one on one. With 220,000 PwC people now using G Suite, the size of this challenge is surely obvious.

Across the lot, but particularly in the office productivity space, we should all wish Google the best. It gives us all a lot of useful stuff for free (and in fact the ‘consumer’ perception is something Google has had to shake) on the one hand. On the other, competition, much needed in the office space, will drive down prices and drive up features and benefits in the ‘multi-cloud’ environments characteristic of the modern enterprise.

*Donovan Jackson travelled to Sydney as the guest of Google.