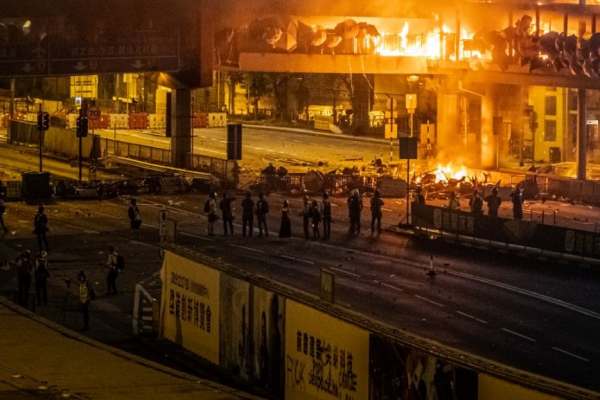 Instead of responding to requests directly, Google will now direct those requests to the US Justice Department, as it would if the request came from China. This means requests will have to be made in accordance with Mutual Legal Assistance Treaty law, a process that can take months to complete.

The move brings Google into line with other western digital giants Facebook and Twitter, which stopped responding to Hong Kong data requests in June.

Critics say Hong Kong’s new security laws threaten the freedoms of citizens, and are as sweeping as they are vague.

The national security law – officially ‘the Law of the People’s Republic of China on Safeguarding National Security in the Hong Kong Special Administrative Region’ – was passed on June 30 this year, one hour before the anniversary of the country’s 1997 handover from British to Chinese rule.

Hong Kong has been operating under a ‘one country, two systems’ arrangement with China that was put in place at the time of the handover. Under that agreement, Hong Kong was expected to enact its own national security law, but has not, due to the law’s widespread unpopularity.

Now, with the ongoing pro-democracy/anti-Chinese-rule demonstrations occurring in Hong Kong, the Chinese Government appears to be seizing its moment to reinforce its control over the region’s citizenry.

Critics say Hong Kong’s new security laws threaten the freedoms of Hong Kong citizens, and are as sweeping as they are vague: Included in the 66 articles of the law is the criminalisation of ‘secession’ (attempting to break away from the country), ‘subversion’, ‘terrorism’ and ‘collusion with foreign or external forces’. Those crimes are punishable with sentences up to life imprisonment. Also included in the legislation: Provision for closed-door trials, wire-tapping and the strengthening of Chinese control over non-governmental organisations and news agencies.

The 66 articles of the act were kept secret until the bill was passed.

Google’s decision not to respond directly to information requests from China and Hong Kong isn’t the only action the digital giant is taking against Chinese influence. Earlier this month the digital giant announced it had banned more than 2,500 Chinese-linked accounts spreading disinformation on YouTube, as part of its ‘ongoing investigation into coordinated influence operations linked to China’.

“The spread in the United States of mobile applications developed and owned by companies in the People’s Republic of China continues to threaten the national security, foreign policy and economy of the United States,” says Trump in the executive order.

“At this time, action must be taken to address the threat posed by one mobile application in particular, TikTok.”

But how much of the order is political grandstanding?

A recent hack – thought to be carried out by ‘hackitvist collective’ Anonymous – shows the US Government leveraging its fair share of TikTok data, including the monitoring user information during the civil unrest over the killing of George Floyd. Much of that work is being carried out by Dataminr, a Twitter-aligned AI firm that has been helping US law enforcement track protesters, providing tip-offs to authorities about where demonstrators are located – despite earlier claims from the company that it would not engage in or facilitate domestic surveillance.

Law enforcement solicits a lot of information from companies in the US such as Amazon, Facebook and Google – considerably more, in fact, than they request from TikTok. According to TikTok’s biannual transparency report, the company received 100 appeals for information from US authorities in the second half of 2019, and complied with more than 80 percent of those requests. For comparison, Facebook, which admittedly is more entrenched in the US, says that over the same period it received more than 51,000 requests from US authorities.

Whether there’s irony there, or at least a case of ‘one rule for thee, another for me’, the Executive Branch is undeterred in its characterisation of Tik Tok – and, by extension, the Chinese Government – as a threat to US national security.

“TikTok automatically captures vast swaths of information from its users, including Internet and other network activity information such as location data and browsing and search histories,” says President Trump.

“This data collection threatens to allow the Chinese Communist Party access to Americans’ personal and proprietary information – potentially allowing China to track the locations of Federal employees and contractors, build dossiers of personal information for blackmail, and conduct corporate espionage.

“These risks are real.”