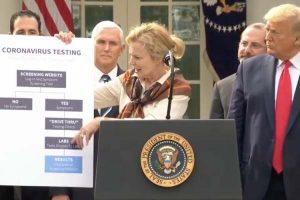 A coronavirus triage beta website from Google’s sister company Verily, rushed into early beta launch after a bumbling announcement from President Trump, was fully subscribed within hours and unable to schedule any more testing appointments.

The Covid-19 Project Baseline offering, which is an integration to Verily’s Project Baseline offering developed in 2017, provides an online Covid-19 screener survey. Anyone with coronavirus symptoms or who has been near an infected person, can take the survey to determine if they need further testing. People meeting eligibility and requirements for testing are then directed to mobile testing sites, based on capacity. Results are then emailed to those tested.

The site https://www.projectbaseline.com/study/covid-19/ launched on Sunday night, US time, and was fully subscribed by Monday morning, with visitors to the site presented only with a notice saying it was unable to schedule more appointments at this time.

“You cannot fight a fire blindfolded.”

The site was first announced on Friday by President Trump, who said the government was working with Google (mistake number one – it’s not a Google site, but an offering  from Verily, the health and life sciences division of Google parent Alphabet) on the screening site.

In typical bumbling Trump fashion, the president announced at the White House press conference that 1,700 Google engineers were working on the site.

The site, which Trump gave the impression was good to go and would be nationwide, wasn’t ready for launch – and wasn’t nationwide, instead going into test in California’s Santa Clara and San Mateo counties in the Bay area. Posts from Verily and Google quickly followed to clarify the situation. (Trump of course, continues to stick to his version, reportedly telling the White House press briefing that Google CEO Sundar Pichai had called to ‘apologise’ – though what he was supposedly apologising for apparently wasn’t made clear.)

“To protect the most vulnerable, the COVID-19 testing pilot program will begin by testing the highest risk individuals at select sites in the San Francisco Bay Area, where there is a significant volume of known cases,” Verily said. “As more testing kits and sites become available, we plan to scale the capacity.

“Ultimately, our goal is to help local authorities expand testing access in California as the need continues to increase.

“The program is in its early stages, and we will take the time to assess operations at pilot sites in the Bay Area before rolling out to additional sites.”

The United States has been slammed for its lack of testing, which has been slow and often inaccessible.

The World Health Organisation today has urged countries to increase their testing, saying all suspected cases need to be tested.

“We have a simple message for all countries: Test, test, test,” WHO director-general Tedros Adhanom Ghebreyesus said at a media briefing, where she noted there hasn’t been an urgent enough escalation in testing, isolation and contact tracing.

“You cannot fight a fire blindfolded. And we cannot stop this pandemic if we don’t know who is infected,” he said.

Our World in Data figures show just 41.8 CDC tests per one million people in the US and 24.4 per million for Covid Tracking project tests. New Zealand, with just eight confirmed cases of Covid-19 has, in comparison logged 70.5 tests per million people, with 338 tests logged by March 11. The site doesn’t record overall figures for Australia, instead breaking it out per state. New South Wales was tenth on the list of tests performed by country, at more than 8,000 tests by March 08 – that’s not far behind the CDC testing figure of 13,624 on March 12 and ahead of the US Covid tracking testing figures of 7,900 by March 12.

The Project Baseline platform, which was launched in 2017 as an effort to map human health, collects and stores health information with an aim of providing the core technology infrastructure to enable decentralised screening and support broader accessibility.

However, the site’s requirement that users connect, or create, a Google account before they are screened has raised eyebrows among some, concerned about data privacy.

Verily says the requirement to connect a Google account is to ‘help us to collect your answers to the screening survey, contact you to schedule testing and deliver results back to you’.

“Your data collected by Verily through the testing program will never be joined with your data stored in Google products without your explicit permission,” Verily says. It does, however note that “information may also be shared with certain service providers engaged to perform services on behalf of Verily, including Google, which Verily leverages for certain technology and services, including cloud services, security services, data storage, website hosting, and other support functions.”