News > Imagine Cup winners: Is this really the pinnacle of Kiwi innovation?

Imagine Cup winners: Is this really the pinnacle of Kiwi innovation? 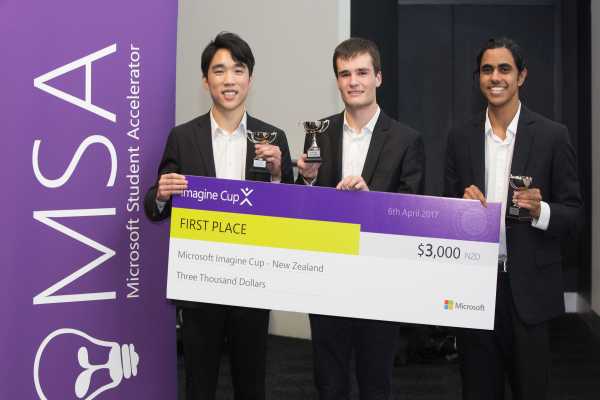 Yet another collaboration app enough to bag Microsoft’s Imagine Cup…

While hesitant to pooh-pooh the efforts of the winning entry for this year’s Microsoft Imagine Cup, the question should surely be asked if yet another collaboration app truly represents the pinnacle of young Kiwi innovation.

Imagine Cup is an annual worldwide series of technology competitions focused around Microsoft technology which has run for 15 years. On one end, throw some Microsoft tech at some young software developers and stand back. On the other, watch as yet another app pops out to support improved collaboration.

This time round, GroupCram, comprised of Hamish O’Neill, Eric Liu and Nilesh Magan, emerged as the winning team. The result which crushed the other seven finalists is described as ‘a student collaboration app designed to help with studying and group assessments’. GroupCram therefore targets a popular niche, when Facebook or Slack or indeed any one of hundreds or perhaps thousands of free apps could likely do the job (and probably do already).

Now, it has been some time since anyone at iStart attended Uni or indeed developed anything more substantial than a headache, so we’re probably not 100 percent up to speed with how millennials go about learning, what with the multiple distractions of social media, smartphones rampant internet connectivity adding to the traditional student focuses of beer pong and the attractions of the opposite (or otherwise) sex. But we are fairly keen users of online tools and tend to find that there is an abundance of free options available to support collaborative working across geographically dispersed locations.

It is also our possibly ignorant contention that reinventing a well-worn wheel doesn’t constitute innovation. And also that reinventing Facebook or any other mature technology is probably going to be a long and hard route to success. That’s notwithstanding an on-point remark from a design ‘guru’ that ‘I can’t understand this focus on innovation when improvement can deliver far better results’. Pick your battles, though.

By winning the local comp, the team takes home $3,000, small beer next to the all-expenses paid trip to Seattle to represent New Zealand in the Imagine Cup global competition this July and take a crack at the US$100,000 grand prize. Perhaps we shouldn’t underestimate the work to be done in the social collab space: local 2014 winner Estimeet won the $50,000 Innovation Category at the world finals for its social interaction app which shows the distance and estimated arrival times of friends. Or, judging by its website, will do. Soon.

In a statement, Microsoft director of developer experience Chris Auld said, “Imagine Cup is about empowering the next generation of young Kiwis to use technology to shape how we live, work and play. Every day we’re seeing incredible examples of our students creating game-changing software, with the potential to be the next big thing. Together with Microsoft’s Student Accelerator programme, the Imagine Cup gives them the platform to turn their ideas into reality.”

iStart wishes GroupCram well on its American adventure and do hope to be proven wrong about the untapped potential for new collaboration tools.