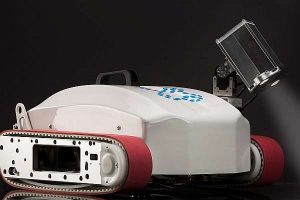 Climbing robots might have a sci-fi feel, but they’re just as real as the $8.8m in funding just secured by makers, Invert Robotics…

Starting life as a University of Canterbury spin-out, the company’s magnet-free wall-climbing robot design is a world first for hazardous environment inspection robots and allows for remote inspection across non-magnetic surfaces such as stainless steel, carbon fiber, aluminum and glass.

“Our robots go where other robots cannot and people should not.”

Now the Christchurch-based Invert Robotics has opened offices in Europe and has a fresh capital injection to work with. (The group already counts Allan Moss, Inception Asset Management and the New Zealand Venture Investment Fund among its investors – all of whom participated in the latest funding round.)

And they’re not messing about. This week the company opened a new office in Lille, France, with plans to open a US office soon.

According to the company the new funding will also be used to explore new use cases for its exploratory robots. So far they’ve been used by several Australian and New Zealand dairy companies and cooperatives including Fonterra, Synlait and Murray Goldburn, as well as Air New Zealand and brewing multinational Heineken.

The units also service the pharmaceutical, oil and gas, and chemical industries, but currently supply most value to the food and beverage industry, ensuring the safe and pathogen-free storage and transportation of goods.

“We give our customers an easier, safer and faster way to inspect the safety and integrity of the most hazardous and toxic environments,” says Neil Fletcher, Invert Robotics MD.

“Our robots go where other robots cannot and people should not.”

That they do. Moving at a maximum speed of 12 centimeters per second, the robot offers visual checking via the on-board camera (1080p with 30x optical zoom). The robots can also perform in-depth scans using surface-wave detection and ultrasonic probes to measure wall thickness, assess structural integrity and find defects on any surface.

The company in no stranger to fundraising, having conducted a million dollar crowdfunding campaign through Equitise in 2016 and receiving funds from the government and private investors looking to cash in on the ascending tech.

“With Invert Robotics, companies across a variety of industries will be able to deploy climbing robots to make asset inspection and maintenance easier and more effective to avoid life-threatening situations for their workers, their communities and their consumers,” says Finistere Ventures’ Arama Kukutai.

“We see the potential applications as almost limitless.”