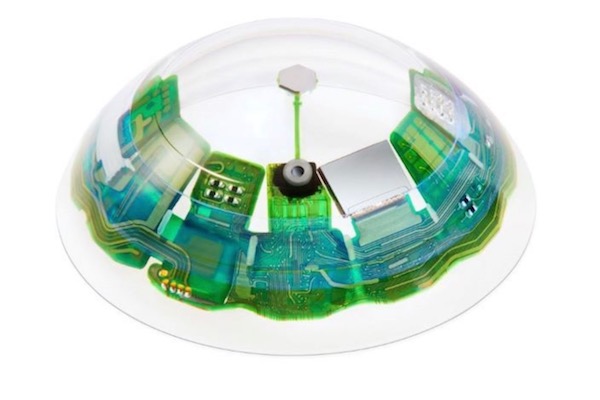 The sci-fi future in focus with new prototype…

The metaverse vision might see us all donning VR headsets to roam virtual worlds (yeah, we’re not completely sold on that concept yet, either), but California’s Mojo Vision has far grander plans.

The company recently announced a new prototype of its augmented reality contact lens technology, in what it says is a critical milestone for the company.

Dubbed ‘invisible computing’ it makes information available to the wearer through eye movements.

The new prototype includes new hardware features and technologies embedded directly into the lens, which it says advances its display, communications, eye tracking and power system. A ‘foundational operating system code and UX components have been included for the first time, enabling further development and testing ‘of important use cases for consumers and partners’.

The company claims the contact lens offers the world’s smallest, densest display ever created for dynamic content, measuring 0.5mm in diameter with 14,000 pixels per inch of MicroLED display and a pixel-pitch of 1.8 microns. Paired with a Mojo-designed micro-optic and custom silicon backplane chip, the display can project bright text, rich graphics and high resolution video on the wearer’s retina, that are visible indoors, outdoors and even with the eyes closed.  An accelerometer, gryroscope and magnetometer continuously track eye movements. N ASIC includes 5GHz radio and a processor to transmit sensor data and stream AR content.

The company, founded in 2015, has been working on the technology for a number of years, debuting an early prototype at CES 2020.

Over the years, it has amassed US$204 million in funding, including a January 2022 Series B round which raised US$45 million, and won the Last Gadget Standing award at CES 2021.

The company recently announced a partnership with Adidas Running, having identified performance athletics as a potential hot market for its technology – providing training data without  an athlete having to look away at a device such as a wearable or screen.

While consumer use cases might hog the headlines, Mojo’s vision, if you’ll excuse the pun, goes beyond consumer and athletic use cases.

It’s hoping the devices might one day be used by those with low vision – a prosthetic for the eyes, effectively, adding contrast to help those with low vision better navigate the world. The company has been working with the US FDA’s Breakthrough Devices Program, which aims to find more effective treatment or diagnosis of life-threatening or irreversibly debilitating diseases or conditions.

Beyond that the company, and its backers who include the likes of Gradient Ventures – an Alphabet venture launched to invest in AI startups and provide Google engineering assistance – and Motorola Solutions, are no doubt eyeing a plethora of industrial applications – from health monitoring to manufacturing and emergency services use cases.

Indeed, while Google Glass, Hololens and Magic Leap headsets failed to find a foothold in every day consumer life, they have found a commercial market. Hololens is in use by companies including Toyota, which uses it to ‘improve, speed up and ultimately transform existing vehicle service’.

Meanwhile, Magic Leap recently announced it was moving its focus from consumers to the medical market. Google Glass, initially debuted as a consumer venture, was discontinued amid privacy concerns, before reemerging as an enterprise offering. It has been used by companies including GE and DHL, and healthcare organisations who use it to provide patient info at the bedside, rather than doctors spending all their time in front of computers.

Of course the past is littered with attempts at smart lenses too. Remember Google’s smart lenses that were going to measure glucose levels of tears? They were hyped in 2014, only to be abandoned in 2018.

And there remain plenty of privacy issues to be worked through for the wider intelligent computing market – being able to conduct covert facial recognition for example, or to film without others knowing (a la Google Glass consumer concerns) brings up all sorts of major issues.

The hacking threat is also an issue and one Mojo Vision’s director of security Mike Grace, has previously noted. In a blog post, he says by the time the Mojo Lens is introduced to the public a bigger threat than ransomware threats will be supply-chain security.

“From a security perspective, our lens is pretty basic. It displays information and it retrieves information. And it’s got some sensors and communication protocols to help it do that. But it doesn’t have a huge storage cache, USB port or exhaustive list of comm protocols it supports.

“That’s a good thing, because it limits the avenues an attacker can exploit.”

Mojo’s offering isn’t fit to put on your eyeballs for the moment, and there’s no time frame yet for release.