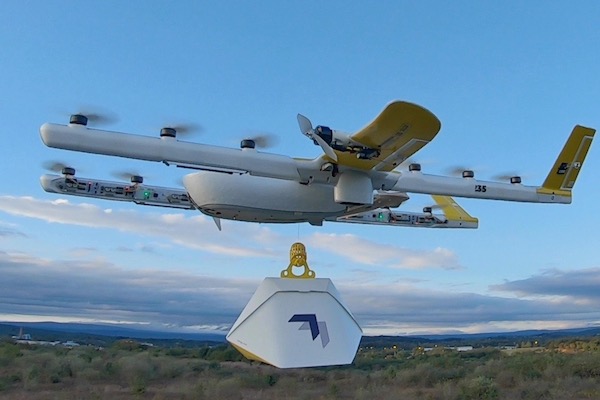 Drone deliveries are taking off in both New Zealand and Australia, with KFC, Roll’d Vietnamese and, in New Zealand, Dominos, all cleared for flight in recent weeks.

In Australia, Alphabet’s Wing is taking KFC and Roll’d Vietnamese deliveries to new heights across South-east Queensland and Canberra suburbs, while in New Zealand pizza chain Domino’s has been cleared for take-off for wider drone delivery trials.

“Roll’d will be a key player alongside other businesses to reduce the costs of infrastructure on roads and slash congestion,”

“Through our partnership with Wing, Roll’d will be a key player alongside other businesses to reduce the costs of infrastructure on roads and slash congestion,” Hoang says.

For KFC, drastic changes in customers’ buying habits thanks to the pandemic, were reportedly the catalyst, with customers seeking convenience, speed – and no doubt a contactless delivery.

Domino’s claimed the title of world’s first drone pizza delivery in 2016, with a drone drop from its Whangaparaoa, Auckland store.

The newly signed deal with SkyDrop will see the launch of the second stage of the commercial drone delivery.

Matthew Sweeny, Skydrop founder and CEO, says New Zealand ‘has a real opportunity to be at the forefront of the drone delivery industry globally’.

On the back of the initial Domino’s trial, Skydrop has developed ‘faster, safer, quieter and greener drones’ capable of carrying loads of up to 3.5kg.

The company says it has also improved the precision delivery altitude of the drone up to 60 metres, added a parachute system for safety and received new certification from New Zealand’s Civil Aviation Authority.

SkyDrop has a 102 operating certificate, enabling it to pick up and deliver packages ‘within specified conditions’.

It’s not just pizzas and slurpees being delivered. Globally the company has worked with customers including 7-Eleven, NASA, Johns Hopkins University of Medicine and Remote Area Medical as well as New Zealand Land Search and Rescue, to deliver medicines to rural healthcare clinics, ship to shore deliveries of medical sales along with the retail and e-commerce deliveries.

The company recently announced a partnership to launch the first automated external defibrillator drone delivery service, delivering portable defibrillators to 911 callers when they report symptoms of a cardiac arrest.

Australian studies have suggested the drone industry will soon contribute around AU$5.5 billion to the economy, a figure that could reach $14.5 billion come 2040. In New Zealand, a 2019 Ministry of Transport ‘drone integration paper’ suggested drone use could be worth NZ$7.9 billion over the next 25 years, with ‘significant opportunities for economic, innovation and social benefits’ from the ‘fast development of the drone industry’.

But while the drone industry may have seen fast development, rolling out drone deliveries beyond trials seems to be providing logistical challenges, and Kiwi plans to harness the Ministry of Transport touted benefits haven’t progressed so quickly, either.

Consultation on a proposed regulatory regime closed last June. Among the proposed regulatory measures are requirements for a basic, online, pilot qualification and drone registration for any drones over 249 grams, with additional measures, including mandatory use of remote identification capability on some drones during flight and geo-awareness requirements, would require further consultation, the Ministry of Transport documents note.

Further down the track an unmanned aircraft traffic management system has been proposed.

Australia’s Civil Aviation Safety Authority mandated all commercial drones must be registered from January 2021, with a new registration levy of AU$40 for those weighting more than 500 grams from last July in the wake of increasing numbers of ‘near encounters’ between drones and manned aircraft.

Despite the growing regulatory focus, drones are making inroads – above ground and underground. Drones are being used for surf lifesaving, shark, crocodile and traffic congestion monitoring and in mining. They’ve even taken a turn as midwives, delivering coral babies on the Great Barrier Reef.

North Queensland’s Cloncurry is home the only existing drone testing facility in Australia – a AU$14.5 million facility where Boeing is among those testing drones.

Earthly challenges, and testing, of drones, however, pale in comparison with those Nasa is currently working on.

In April 2021, the tiny experimental Ingenuity helicopter lifted off on Mars, its rotors lifting the craft three metres to deliver the first powered, controlled flight on another planet. Now Nasa has its eyes on Saturn’s largest moon, where Dragonfly – a rotorcraft the size of a small car – is scheduled to fly multiple sorties to ‘promising’ locations on Titan.