News > Life’s a beach – why aren’t you working there?

Life’s a beach – why aren’t you working there? 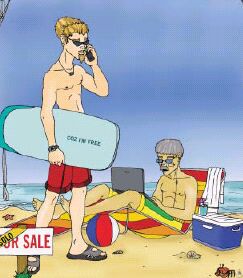 Working from home is a good idea, but working from paradise is better – David McNickel looks at the emerging reality of hi-speed access from (somewhat) remote locations, and how it’s changing the face of work in New Zealand…

As recently as 80 years ago, most of New Zealand’s population lived rurally and farmed the land. But the dawning of industrialisation changed all that. Suddenly, the arrival of the combine harvester meant wheat fields that once took every able-bodied man in town days to harvest were bailed up and drying out in a couple of hours.

The farms didn’t need us, so we moved to the cities to work in factories – helping to make the machines that drove us from the land. We became an industrialised economy, and our cities grew.

Today our cities continue to grow, but for a certain percentage of the population, working no longer means having to be at a desk, in an office, overseeing the production of widgets on the factory floor below.

These days we’re all familiar with sending emails to co-workers in offices only meters away. It’s faster, it’s more efficient, and the fact is, we could just as easily have sent that email from a hundred miles away.

Please release me
But will we? Although the technology permits it, oftentimes the mind does not. If you’re an employer, ask yourself this. If you were interviewing for a new accountant, marketing manager or architect – and the applicants all said they’d prefer to work from their office at the beach – would you hire them?

If you’re honest the answer is probably not. And the reverse scenario is also a tough one for many. Although the idea of working from the beach or a holiday home in Wanaka sounds appealing to workers toiling away under a fluorescent light in Sector 7-G, the fact is most of us are social animals.

We like going to work everyday. We enjoy discussing office politics with our co-workers. As anyone who has spent any significant time working freelance or operating a sole trader business can testify, it can be a lonely old time out there flying solo, and a nice view out the window is little consolation for zero social life.

The shift begins
But for some of us, there is the best of both worlds. Time in at work for meetings and… well, probably just more meetings – and time back at our ranch or bach to get some real work done. The problem up until now however, has been one of communications mobility and access to hi-speed data services.

At Telecom HQ in Wellington, rural solutions manager Seager Mason sighs resignedly when I mention the now infamous Telecom ad in which a middle-aged woman at Piha beach convenes a teleconference with city bound colleagues via her lap-top – while her partner plays with her feet.

The cruel irony of course, Mason admits, is that Piha is not one of the hundreds of small towns that Telecom has now enabled for JetStream. But, he explains, the roll out is on-going. “It’s not like we stopped or anything,” he says, “it’s continuous.” For any mobile worker with a holiday home, Mason says literally hundreds of popular destinations are now JetStream capable.

After holidaying with his family in Wanaka for more than 30 years, Beattie now runs his chain of drug addiction and alcoholism clinics, including the renowned facility at Hanmer Springs, from the picturesque Otago township. He says the right kind of management philosophy and corporate culture goes a long way towards making his lifestyle choice a workable option.

With clinics in Auckland, Wellington, Christchurch, Hamilton and Tauranga, 79 full-time staff and more than 150 therapists and clinicians on contract, Beattie says there’s no way he could be everywhere all the time anyway. “My view is I don’t have to eyeball people on a daily basis,” he says. “So I’ve tried to cultivate a creative culture at a corporate level within our organisation, where people know what’s expected of them and are left alone to get on with it – and they use the current new broadband technologies to regularly report on their progress.”

Cheap as chips
So why aren’t more people opting for hi-speed internet? Mason says he thinks many people still aren’t aware that JetStream has arrived in their region (check availability at www.jetstream.co.nz), but in another ironic twist, he says the problem for Telecom (and any other provider looking to offer a hi-speed internet service), is that the huge popularity of the internet in New Zealand has proven to be a double-edged sword.

Internet access prices here are the cheapest in the world. Xtra for example, charge NZ$27.95 for unlimited dial-up. Australian ISP Telstra Big Pond, by comparison, charge A$38.95 (about NZ$45.00) and in the States giant ISP America Online charges US$23.90 (approximately NZ$42.00).

The free ISP services of a couple of years ago were a clever manipulation of the interconnection deal between Telecom and Clear and were unsustainable – but they did drive the price of access down, and it hasn’t risen since. The result says Mason, is that even where JetStream is available, only about 5% of subscribers have signed up for it, the rest being reluctant to make the jump from paying the very inexpensive $27.95 for unlimited dial-up access – to around $65 per month for JetStream.

Making the business case – yourself!
So what does this mean for you and hi-speed internet access to your hideaway? Simply that Telecom needs to see that an area is financially viable before they’ll install the service. But the numbers aren’t huge. Mason says three of four businesses or 27 home users signing up is enough for Telecom to put in JetStream.

And you can be pro-active. “We had a situation recently,” he says, “where a guy wanted JetStream at his bach. We told him what the story was so he went door knocking and got enough people in his area to commit to it for us to put the service in.”

How far does it stretch?
Mason says Raglan is a good example of a typical holiday/beach front town that now has JetStream loaded in its exchange. But just because you have a bach around there doesn’t necessarily mean you can get the service – as it’s how close you are to the exchange that’s important.

In general terms JetStream is available five to seven kilometres from any JetStream capable exchange he says, so if your holiday home is 20 kilometres out of Raglan for example – then you’re probably out of luck (and remember, you have to have an existing phone line). That’s the bad news. The good news is that the Telecom BCL hi-speed internet service now on trial with Fontera nationally, will likely be rolled out at the end of this year.

The system works using radio signals from BCL’s towers (BCL provide the towers for TV broadcasting in New Zealand), offering a ‘line of sight’ wireless service for internet subscribers. Mason says anyone within 40 – 50 kilometers of a BCL tower should be able to use it. (if you can get a TV signal, you should be able to get an internet service.)

This system is similar to the one being offered by Walker Wireless who have recently secured contracts to provide hi-speed internet to Southland, Northland, and the Wairarapa as part of the Government’s provincial broadband extension (Probe) program. If none of these services are right for you then there is of course Telecom’s mobile JetStream and Vodafone’s GPRS service.

Urban sprawl goes rural
With technological advancement meaning the reality of three days in the city and four in paradise is now becoming achievable for many, the big question has to be ‘can I afford this?’ As has been widely covered in assorted media recently, there is currently something of a land rush on in New Zealand, with city folk snapping up lifestyle blocks within a reasonable driving distance (anything up to three hours) of their city homes – as quick as developers can subdivide them.

Prices, as a result, are heading skyward – fast. In a recent Metro magazine article on Omaha beach (about an hour’s drive north of Auckland) journalist Simon Farrell-Green reported that in the three months it took him to write his feature, the benchmark price for a beachfront property at Omaha went up by $250,000 – to around $1.5 million.

But for those fortunate enough to gain ‘first mover’ advantage, there appears to be no regrets. “Moving to Wanaka has changed our lives for the better,” says Queen Mary Hospital’s Beattie. “I don’t envy my business and professional friends who are still living in big cities. Fast internet access and other communication technologies, such as audio and videoconferencing, means you can run a business from almost anywhere where broadband technology is available. We’re very happy with our decision.”

Resources:
Mobile Business Research Pavilion – a showcase of some of the leading solution-providers in New Zealand and their case studies, as well as other resources