News > HoloLens soon to be available to local developers

HoloLens soon to be available to local developers 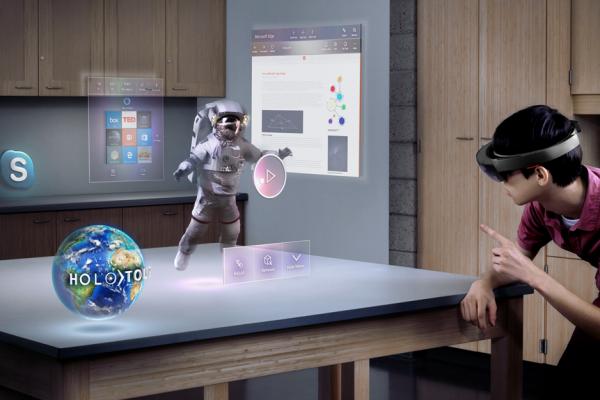 What will you do with augmented reality…

Developers in New Zealand and Australia can place orders for Microsoft’s ‘mixed reality’ headset HoloLens as of today, with the gadget’s Development Edition and Commercial Suite made available to six new international markets overnight, including ours.

Unlike the budget VR goggles into which a smartphone is slipped, HoloLens is a self-contained wearable computer running Windows 10. It was announced in early 2015, with the first developer editions made available in March this year. It is also designed as an augmented, rather than virtual reality device, combining holograms with the real world.

You’ll need a pretty strong neck for HoloLens as it weighs in at a fairly chunky 579 grams – that’s a good bit over half a KG – but there’s a lot of computing and sensing power in that package. HoloLens’ array of sensors includes an inertial measurement unit (accelerometer, gyroscope, and a magnetometer), four ‘environment understanding’ sensors (two on each side), a depth camera, a camera, a four-microphone array, and an ambient light sensor.

Like most new technologies, the biggest question which must be asked of HoloLens is also the simplest: ‘but what does it do’? The answer to that is surely, at least in part, why the gadget is being thrown open to more developers to tinker with in pursuit of the ‘killer app’; indeed, in Microsoft’s official blog making the announcement, technical fellow Alex Kipman writes “When we set out to pioneer mixed reality we knew that many of the best innovations would be discovered only when developers and organisations started developing with HoloLens.”

Which is not to say that HoloLens is without its uses right now. A collection of applications are provided to developers, which will probably help get the grey matter going. That includes Holograms, a catalogue of a variety of 3D objects; HoloStudio, a 3D modelling application with 3D print compatibility; a holographic version of Skype; and HoloTour, an audiovisual virtual tourism application.

In addition to Australasia, the list of countries where HoloLens is available includes Canada, France, Germany, Ireland, the United Kingdom and of course, the United States.

It is early days yet, but therein lies opportunity, particularly for developers. A Juniper Research paper released this week said hardware revenues from VR headsets, peripherals and 360º cameras will reach over US$50 billion by 2021, up from an estimated $5 billion in sales this year (although it sheeted that growth to widespread adoption of VR by smartphone users, and the high unit prices commanded by headsets for PCs and consoles).

Juniper also said the market will be triggered by the launch of PlayStation VR, and Microsoft’s Project Scorpio; Scorpio is the next-edition X-Box console but it is unlikely to use a HoloLens headset, instead depending on the Oculus Rift and other 3rd party devices.

In April this year, market watcher IDC said it expects AR hardware to take longer to bring to market. “While development kits from players such as Microsoft, Meta, and others point to a strong future in AR hardware, these devices are dramatically harder to produce than VR products,” said Tom Mainelli, devices & displays VP in a statement at the time.

Microsoft has a chequered record in hardware and Mainelli perhaps hinted at the stakes: “Doing this right is more important than doing it fast, and we urge the industry to continue its slow and steady approach to hardware development here, as AR is going to have a profound impact on the way we interact with technology and the way we do our jobs for many years to come.”